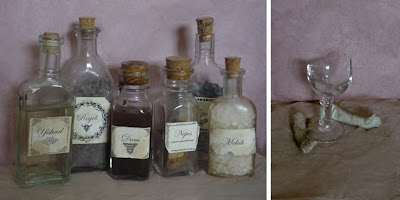 I once had work in an exhibition in Salem, MA. It coincided with an exhibition at Salem’s Peabody-Essex Museum that featured the work of Joseph Cornell and was curated by the museum’s chief curator Lynda Roscoe-Hartigan, who is the preeminent scholar on Cornell. The work in this other exhibition was by artists who were influenced by Cornell in one way or another.

I am not overly cautious about the handling of my altarpiece constructions when simply driving them down the road a few miles. Some parts of the works are breakable, but they are quite sturdy in general. What concerns me more is their presentation.

The problem that arose with this exhibition was that work had to be delivered to one location but was to be installed at another. I just don’t trust others with putting all the pieces back together in their proper positions. I was given a special dispensation and a half hour window when I could reorganize the elements of the works displayed. I was glad to have this because the sticky notes I found with sketches on them concerning the placement of the objects mentioned the "bottles with cookies in them." I suspect these were drawn up by the woman with—and I’m not kidding here—lavender hair.

Curious hair color choices aside, I have had several people question me about the glass jars and their contents. The intended purpose of the bottles expanded after the first few pieces were completed. In all of them you will find at least two bottles—one with wine and one with unleavened bread (or cookies, if you’re so inclined). Since the original intent of the work was that pieces seemingly function as portable devotional altarpieces, the portability needed to account for the lack of an actual altar and the need to contain the Eucharistic elements.

The wine and bread will likely continue to be a part of the format of these works. They suggest an element of interactivity, a participatory aspect for the viewer. Their purpose began to expand in works like the Altarpiece and Reliquary of St. Joseph. The bottles in this work hold items such as olive oil, scraps of text cut from book pages, and a broken light bulb. Each is a symbolic reference to this St. Joseph.

Past the objects that are held within the bottles themselves, I needed to consider whether or not the bottles were simply an homage to Cornell or if they expresses some greater, and more personal idea. As containers, sealed containers, they can sometimes seem to prevent the viewer from actually participating in the work. You can see the elements of the Eucharist but you cannot ingest them.

Rather than prevention, the sealed bottles can be viewed as a form of preservation. In the same way that an actual reliquary preserves the objects associated with a particular saint, these bottles preserve objects. They are necessary objects, in a sense. They are somewhat sacramental because they suggest a purpose that is greater than mere symbolism.

Related to the bottles are cordial glasses. While there are not yet any completed pieces that incorporate the glasses, there are several underway. These objects were derived from Cornell works, too. For my pieces, I needed to determine their relevance before placing them. To simply borrow the object would have been irresponsible and rather uncreative.

The glasses can contain objects just as the bottles do. They also appear in broken forms. Their brokenness is sometimes a reference to other forms of brokenness conveyed in the larger piece. It can also represent an openness or a release. Materials in these broken glasses are more available to the viewer than those sealed in the bottles. Yet they are also unprotected and more susceptible to decay.

Of course, none of these ideas may be apparent to the viewer. One thing that is apparent, whether viewers consciously consider it or not, is that glass is transparent. The objects in both glasses and bottles can be seen, they are not hidden. The objects become another layer, like paint and text. Each is an equal participant in the full meaning of the works. Viewers may obtain the meaning when considering the interaction of the layers.
Posted by Musings on Contemporary Art & Artists at 9:56 AM