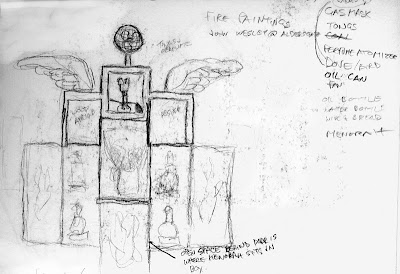 After a significant absence, I have returned to the blogosphere. Thank you to those who have been followers of this blog and who have voiced their interest and comments about the subjects discussed. I do intend to keep up with the entries on a more regular basis, though, if I have to forego something, writing about artwork—mine or that of someone else—is likely to be on the chopping block before actually creating artwork.
I have stated at various times that the process of creating my altarpiece constructions is quite lengthy. The initial ideas and sketches typically come several years before the finished products. Sometimes that is because I am searching for very specific elements and objects to place within the works. It also takes some time to build and age the physical structures. The piece shown here was mostly constructed in the summer of 2011. However, the very first sketches for this work were likely produced in 2003 or 2004. My memory on that is a bit hazy. I tend not to date sketches because I will work on them again and again over several years. 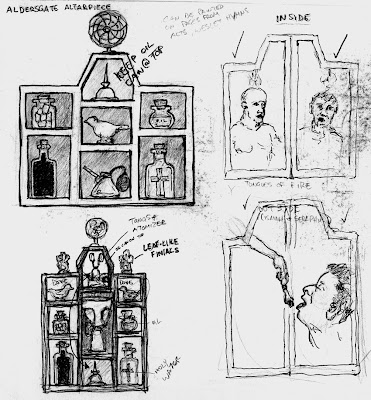 Within these sketches the progression of the concept is seen. I do know that this work came about from the acquisition of several pieces from an antique store in New Hampshire. The first sketch shows some specific elements, most obviously the small electric fan on the top. At that stage, I intended to place some sculptural wings along the top, as well. I never did find any wings that would be appropriate. Eventually, I happened upon a set of porcelain dove salt and pepper shakers at another antique store somewhere near Washington DC, while visiting a friend. They became an alternate solution for the wings.
Two sketches appear next to each other in the second example—these are even in a different sketchbook as the first one had already been filled. The first image subtracts the wings and includes only one of the doves. The sketch below it has included both doves and some additional, new elements. One is an antique military-issued gas mask. Another is two metal acanthus leaf finials of some sort. Those finials were in a box of “junk” that I picked up at a flea market in Massachusetts at least a year or two later. They were not even what I actually wanted in that box of objects, yet I found a use for them.
The evolution of this work was slow. Still, the fan remained as kind of a crown on the top of the piece. Even while the work was being built that was the intention. When I was recently gearing up to work on the piece again, finishing off the trim and all the gold leafing and aging, I decided the placement of the fan on the top was just too much. A sketch, after all, is still distinctly different from a physical, three dimensional thing. Proportionally it did not seem right. The entire work was too tall and the fan seemed spindly in that spot. The fan was, however, an integral element from the conception of this piece. 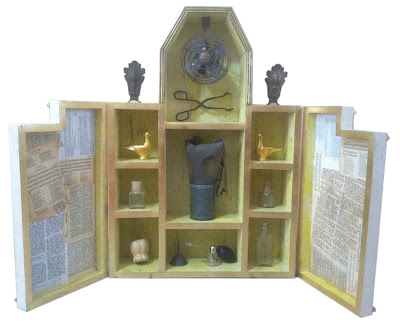 I recognized that the fan could fit inside the uppermost section and would still operate as a type of oculus for the work. This did require that I shift some of the remaining elements into some other areas and boxes in the piece, but the new solution was much more satisfying. The altarpiece is now ready for the final painting stage and should be finished within the next couple months. That means that it will be nearly a ten year endeavor. That may seem too long for some artists. For a work like this it is just the right amount of time. These pieces need to evolve and change over time. The nuances that are manifested over the creation of the pieces also work on the viewer over longer periods of time. The works are not static, but reveal more with each additional viewing.
Posted by Musings on Contemporary Art & Artists at 6:22 PM No comments: