Allison Luce—From dust you have come 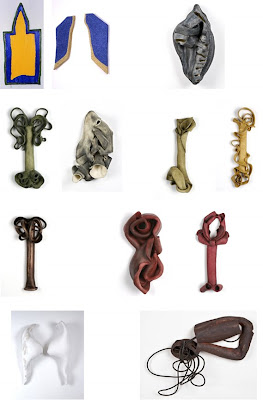 It seems that the feminist movement needs a new publicist. Perhaps some of the more outrageous antics of a few first generation feminists are to blame, but a feminist stereotype has emerged. The shame within the art world is that younger artists may be apt to dismiss some of the groundbreaking work of their early feminist colleagues. The broader concerns of the movement are thus left unexplored, or at least under explored, by these young artists.

The reclaiming of imagery based on the female body runs the gamut from Georgia O’Keeffe’s flower paintings to performance artist Carolee Schneeman’s Interior Scroll. Yet the body of a woman is but one part of the entire feminist project. Artists like Faith Ringgold, Miriam Schapiro, and Judy Chicago tackled the place of women in a patriarchal system, in part, by the very media and materials of their art. In fact, Judy Chicago’s famous Dinner Party blends overt female imagery with the use of clay, a material that held a traditional position as a craft medium, a lesser medium.

Contemporary clay artist Allison Luce follows, in a more subtle fashion, the pathway of Judy Chicago. Luce’s early dual training in painting and art history has greatly impacted her ceramic endeavors. The same themes have been recurrent from the work of the 1990s until the present. The concept of the physical body as a vessel, a shelter, for the human soul is preeminent.

When I first encountered Luce’s work I was most uncertain of her intended conceptual agenda. While the underlying structural material was indeed fired stoneware, the surface treatment did not reveal this. The surface of these works was covered in glitter. The disparity was actually quite fitting. The artist herself proves to be a dichotomy, not conforming to the typical feminist stereotype, but engendering a far more common and culturally expected female appearance. Yet her work clearly exhibits a kinship with O’Keeffe, Chicago, and other first generation feminists.

These glittering works were directly connected to a series of paintings from the same period. In each, the viewer is confronted with forms that reflect Gothic and Renaissance architecture—shapes gleaned from her familiarity with art history. The peaking, steeple-like shapes recall the facades of European cathedrals. The paintings utilize color to convey an open interior or void. The sculptural works go a step further by creating a box-like container for this void. These dazzling interiors are fitting containers for an eternal soul.

As the work matured, into some of Luce’s more recent series, she persisted with this sheltering concept, but chose to obscure some of the more grandiose references to the spiritual realm. The spaciousness of the hollow interiors is not always evident. Some works, like Adumbration, share similarities with seashells, pushing the concept of the body as a physical shelter—or shell—for the soul in a more obvious direction.

Other works form the Serpent Tree series appear as if solid throughout. These seemingly solid works more fully align with the unconscious patterns of our human interactions. The physical being is what we often unconsciously consider the "person" in daily interactions, yet, upon death, we recognize the frailty of that body and reassure one another that the "real" person has departed in the form of the soul.

This series takes obvious cues from the Judeo-Christian creation account. Works like The Beginning offer expectation and hope in the verdancy of new life. When compared with Vertigo, the grayness of which signals death, the viewer senses that something is afoot. Vertigo appears like a human heart, with downward facing arteries and valves, drained of all life. Metamorphosis and Edict suggest bone-like structures. Their previous stages of growth are now hardened and calcified. The series follows a logical cycle that seems to end with The Fall, a downward facing trumpet form in blackened tones that signal death.

Between the extremes of The Beginning and The Fall are a range of more sumptuous and enticing works. Both Eve and Forbidden Fruit are finished in seductive red hues. It is also within works like these that one can find streams of Luce’s feminist heritage. These pieces and others retain the natural slumping of clay slab work that bears considerable resemblance with primary physical female sexual characteristics. They are not quite as obvious as Judy Chicago’s dinner plates, but they do not neglect the idea of female sexuality, either.

What is sensed when viewing multiple works by Luce is her tendency to create pairings, pieces that relate to one another. Immortal Mortal is a pairing, a doubling of the same form, within a single work. One side appears as the fragile earthen vessel, worn and scuffed, while the other is its pristine ideal. The hour glass form that results in the void between them suggests their relationship to one another, based on a temporal plane.

Eve and Forbidden Fruit could be a pairing based solely on their coloration. That is a more common association one finds in Luce’s work. The other is a similarity in shape, with one piece often seeming to exhibit decorative flourishes that extend from a more stable inner structure. Metamorphosis and Edict exhibit this relationship. In this type of pairing gender roles come into question. But which piece stands for which gender? One might assume that the frilly extensions of Edict represent some aspect of culturally dictated female cosmetic expectations. Yet the flourishes could also relate to the rule of nature, wherein the male of the species is more apt to have extravagant coloration or plumage in order to attract a mate. This ambiguity is really at the core of Luce’s feminist leanings. The pairs suggest relational interdependence but do not conflate that with some predetermined and steadfast cultural gender roles.

The last type of pairing again exists within individual pieces. These more recent pieces, like Ambiguous Ambit, exhibit unnatural pairings. Ambit feels more mechanical and synthetic than natural. It is still formed essentially from clay but the addition of an electrical cord somewhat confuses the viewer. Other works have incorporated artificial foliage and even faux fur.

The tension in these works is an avenue by which the artist forces the viewer to consider what is real and what is not. What is authentic and what is a deception. In these works the voids are filled with materials. Where there was once room for the spirit there is now inauthentic material that spills over onto the physical shelter.

In each phase of Allison Luce’s work the viewer is confronted with traditionally held dualities. These may be in the form of male/female or body/spirit, but they all question what is authentic and what is inauthentic. The strength of the work is that it poses questions but offers ambiguous answers. Didacticism rarely produces great art.
Posted by Musings on Contemporary Art & Artists at 10:10 AM