Art Prize: The Popular vs the Progressive Today begins the second installment of a unique public experiment. Grand Rapids, Michigan is in the throes of Art Prize. Through October 8, venues around the city are paying host to an array of artworks from artists from across the country. The artwork—both typical and atypical—is displayed in locations and establishments that are also both traditional and nontraditional. In the midst of a still faltering economy, the 2009 Art Prize seemed to add a much needed shot in the arm (not the Chris Burden type, mind you) to one of Michigan’s larger cities. It is no secret that the Great Lakes State has retained one of the worst unemployment rates in the nation. Who would have thought that planning an art event would stimulate the economy? Rick DeVos, for one.

Anyone familiar with Grand Rapids and the surrounding area would certainly recognize the DeVos name. Half of Grand Rapids was built with DeVos money. This family was one of the co-founders of Amway. Luckily for Grand Rapidians the DeVos family is also quite philanthropic. The total prizes equal almost $250,000 and that amount is touted as the highest prize given for contemporary art. 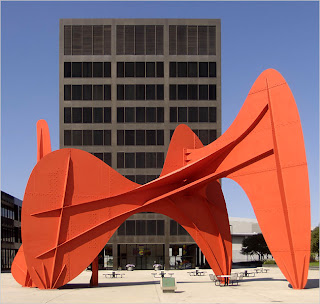 This is an event that is made for the masses. The public chooses the winners. Yet the populous of Grand Rapids has not always had the best relationship with Modern and Contemporary art. In the 1960s the city erected the enormous Alexander Calder stabile sculpture La Grande Vitesse. The public was not pleased. Over time the displeasure was replaced with pride and the sculpture is now recognized as a symbol for the city. In recent decades the city may have gone too far in their “acceptance” of the work since its image not only decorates taxi cabs but the sides of garbage trucks in the city.

This kind of love/hate relationship with art lies at the heart of the tempestuous relationship that the general public has with art. People may enjoy, say, a painting of a recognizable object or scene (such as the large painting of churning water that took the top prize in 2009), but they are less comfortable with work that pushes the limits of traditional art. And while Art Prize has the feeling of an international art fair, in one respect, it is far removed from those fairs in another way.

accurately portrays the atmosphere of a typical international art fair in a chapter from her book Seven Days in the Art World. Her discussion of the Venice Biennale—the granddaddy of all the art fairs—gives a glimpse of the interactions among art world elite and wealthy collectors that take place at such fairs. The term art fair, for many, conjures up recollections of arts and crafts fairs found in countless communities throughout North America. The two could not be further removed from one another. 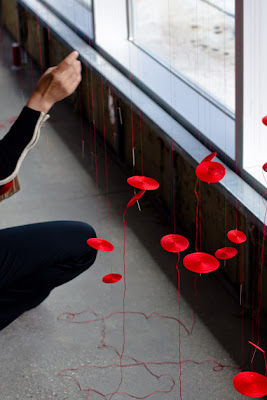 In the United States the only real international art fair that exists is Art Basel Miami Beach—and that is a stepchild of the Basel, Switzerland event that predates it by several decades. Collectors and curators come from around the world to check out the newest works by the leading contemporary artists. It is doubtful that these same folks are hopping on planes to southwestern Michigan to find out what this cadre of mostly Michigan-based artists currently has on display.

The international fairs focus on works that set the discourse for contemporary art. The media and materials are often atypical and the meanings opaque. And the art world seems to like it that way. There is an amount of elitism marked by insulated conversations that leave others on the fringe—uninitiated. So it is just as inconceivable to believe that folks outside of the art world would be interested in attending one of these international fairs.

There is no doubt that the work exhibited in international art fairs somehow impacts and influences the work shown in Grand Rapids. Some of the Art Prize artists may not even realize the connections (I, for one, immediately thought of Vija Celmins work when I saw the 2009 Art Prize winner). The shame is that these two worlds don’t or can’t meet. For all the critical theory that goes into creating and explaining the officially canonized works of contemporary art it would seem that the relevance to the average person on the street should be enormous. After all, the subject and content of these works really does touch on all our everyday lives, even if the economic factors do not. 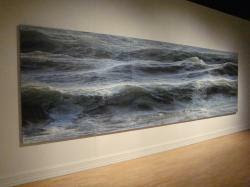 I expect that I would not truly enjoy many of the works displayed at Art Prize. Yes, I guess I might be in that elitist category, too. Still, I give a lot of credit to DeVos. While the quality and importance of the Art Prize works may not be top notch, and the event may not attract the world’s best artists, Grand Rapids is making an attempt to begin a conversation between the public and the art world. It is like Middle East peace talks. You have to get the major players in the same room and everyone has to give a little to get the desired result. I commend Grand Rapids and DeVos for taking the first step.
Posted by Musings on Contemporary Art & Artists at 12:05 PM No comments: 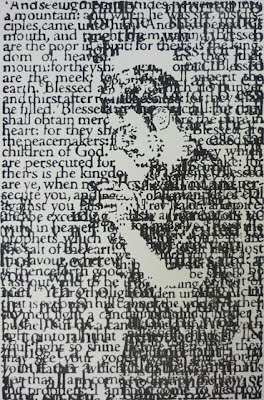 I am not yet ready to definitively state that this will be the new direction for my relief prints. I have been pleased with the response so far. I do still have a half dozen or so earlier woodcut designs from the ongoing series to complete. Keep checking back here to see what happens next.
Posted by Musings on Contemporary Art & Artists at 3:32 PM No comments: