Andy Warhol—The Voyeur and the Viewed 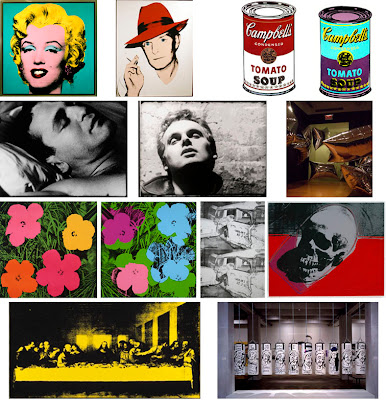 On a recent visit to Pittsburgh I made time to enjoy the Andy Warhol Museum. The gritty post-industrial city seems like an odd incubator for an artist who is one of the most recognized cultural figures of the late Modern period. Yet I found that viewing the work in that specific setting provided a better contextualization of his themes and imagery.

Few late twentieth century artists have been as thoroughly examined in light of their religious background as Warhol. This analysis was not even begun until after his death. Jane Dillenberger’s The Religious Art of Andy Warhol is the most notable example. Warhol’s work was so smooth, so much about the surface and the mass produced, that it was really only in his final years that anyone could catch a glimpse beyond the veneer. Warhol’s Greek Catholic upbringing not only appeared in his regular attendance at Mass, but within the very fabric of his artwork.

As brilliant as Warhol was, it is doubtful that even he recognized the full weight of the underlying religious nature of his work in the early years. Objects that flatly expressed consumerism (Brillo boxes, Campbell’s Soup cans, and Coca-Cola bottles) display a keen assessment of the apparent shifts in American religion. But like all artists, Warhol needed to produce this art before he could begin to analyze his true motivations.

It was within the portraits of celebrities that the historical visual background for Warhol’s work was first manifest. Persons such as Marilyn Monroe—the icons of their day—took on the religious significance of the icons of a bygone age. Modernity’s saints. The concept of a “window into eternity,” through which those in this temporal world obtain a faint glimpse of God, while God and the saints also view them, is transverted. As the cult of saints is subverted by the cult of personality, the all seeing eye of God remains as a constant.

It is within the eyes of these portraits that a link to Byzantine imagery is clearly established. One silkscreen painting of author Truman Capote presents a rather fixed stared. The piercing, target-like irises penetrate the soul of the viewer. A reality surpassing the mere physical plane is established.

Conversely, there are celebrity portrait images that exist in much the same mode as the images of commercial products (Coca-Cola and Campbell’s Soup). In these, the gaze of the subject is obliterated. A lack of value and contrast in the eyes makes the subjects impenetrable, almost soulless. This apparent detachment is an ongoing theme in much of Warhol’s work and can be construed as a stream within his voyeuristic tendencies.

The typical subtlety of the Screen Tests is foregone in one film that was shot in what was apparently a dance club. The main subject, a twenty-something man, gyrates to the sung lyrics: “Nowhere to run to baby. Nowhere to hide.” The eye of God is inescapable—it is on all of us, all the time.

Under further scrutiny, Warhol’s work sheds light on another aspect of the “window into eternity.” As the devoted ponder and contemplate the traditional icon they are participating in a transformational process. Drawing near to Christ and the saints is one step in becoming more like them. Thus, we observe transformations in Warhol’s work. It is an equal strain running concurrent with, and connected to, the voyeuristic gaze.

Transformations appear in both silkscreens and films. The Campbell’s Soup cans appear in both the traditional red, white, and black, but screens and color palettes are also configured to transform the image into something unfamiliar. “Wrong” color combinations produce an object that suggests something known, but also allude to a transfigured and glorious new creation. In a similar, though more controversial vein, the regular appearance of drag queens within Warhol’s films speaks to this element of transformation, too. Even the portrait photos of Warhol, himself in drag, are more than a mere nod to Marcel Duchamp.

The signature aluminum paint and foil covered walls of The Factory were another indication of Warhol’s interest in transformation. Not only did the metallic elements reference the machine-like quality Warhol so cherished, it distorted all that it reflected. This concept is best observed today through the Warhol Museum’s installation of Silver Clouds. The buoyant mylar balloons reflect a distorted, or transformed, image of the viewer. A view from a celestial sphere.

One particular transformation in the body of Warhol’s work was gradual. The theme of the memento mori, most popular in seventeenth century Dutch paintings, runs with increasing intensity through the work of the mid-1960s to mid-1970s. The flower images (1964) retain something of the typical memento mori flavor. The brilliance of the flowers in some images is countered by the typical “wrong” colorations of others. The misregistration of the screens is a symptom of the brevity and beauty of life. And while this can be a signal of transformation, as stated earlier, it is also a sign of imminent death and decay.

The Disasters series preceded the flowers. The emphasis on the banality of images of death in modern society that these represented cannot be overlooked. Media saturation of images of death and disaster have only increased with time. There is a clear connection between the two series. They both engender the themes of the Old Testament proclamation in the book of Ecclesiastes. Our lives pass like wisps of smoke.

A dramatic and obvious shift in imagery came about after Warhol was shot in 1968. This brush with death reopened his childhood experiences of sickness and suffering. The already present theme of the memento mori was blatantly restated in the Skull silkscreens. Faced squarely with his mortality, the artist soon began his most overtly religious works during his final half decade.

Much has been made of Warhol’s appropriation of da Vinci’s Last Supper. The upside down positioning of the image on some canvases and the camouflage painting technique on others have provided fodder for dozens of writers. More telling is the collaborative project—Ten Punching Bags (Last Supper) 1985-86—with the enfant terrible Jean-Michel Basquiat, in which the artists utilized the Christ portrait from da Vinci’s Last Supper as the central motif on a series of ten punching bags.

Basquiat was one of those bright flames that burned out very quickly. His use of appropriation was a natural extension of the work Warhol had been producing for decades. Basquiat’s use of graffiti techniques pushed the appropriation one step further. If in Warhol the seeds of postmodernism were first planted, the blossoming of recontextualization was fully realized with Basquiat’s Neo-Expressionist juxtapositions of images and text.

The punching bags most assuredly represent a “man of sorrows.” Christ takes the blows on behalf of a fallen humanity. But this is not so simplistic of an installation. Warhol had started the Last Supper series when an art dealer invited him to exhibit work across from the location of da Vinci’s original in Milan. The idea of the punching bags came partly from Warhol’s mid-1980s exercise regimen. It was also a natural collaborative element considering the 1985 photos and poster of both artists in boxing gloves and shorts, appearing like rivals in a promotional poster for a Don King championship fight.

The feud-like imagery was indicative of their somewhat tenuous relationship. They collaborated on several works but their relationship, while friendly, was always somewhat strained. The rising star was poised to usurp the master, but his style was only possible because of the breakthroughs of that predecessor. Further strain emerged as Basquiat’s heroin addiction worsened. Warhol had many drug addicted friends, but they were never part of his intimate inner circle as he knew he could not fully trust them.

There was, however, no denying that Basquiat’s presence injected a new vitality into Warhol’s work. It had been years since Warhol had painted, he had utilized the more removed silkscreen process instead. In their collaborations Warhol once again picked up the paintbrush. The image of Christ on the punching bags is hand painted and not printed. It is personal and less detached than much of his work. Like so many artists near the end of their lives, Warhol began to employ a more simplified style and basic medium (consider Michelangelo and Donatello), not to mention a return to religious subject matter.

The punching bags, first painted by Warhol and then by Basquiat, form a complex view of Christ. The word “judge” (and variations using the letters that compose the word) litter the canvas of the bags. Basquiat’s trademark crown also rests above Christ. The additions by Basquiat conjure multiple meanings, or “judgments” of the work. Yet the center of the work remains the image of Christ—the portion painted by Warhol. And in this, perhaps, we find a portrait/self portrait of Andy Warhol himself. A figure that has been represented and misrepresented in a multitude of ways, we can only fully understand Warhol when Christ is centrally placed in the analysis.
Posted by Musings on Contemporary Art & Artists at 1:02 PM

Ovation tv was showing 3 x 1hr shows last night on The Silver Factory and interviews inter-cut with photos and movies made there.........bohemian chic, very 80's vibe - so he was well ahead of his time -- I've been thinking a lot about Andy and his gang today. kathleen borkowski