Robert Rauschenberg’s Place in the Canon 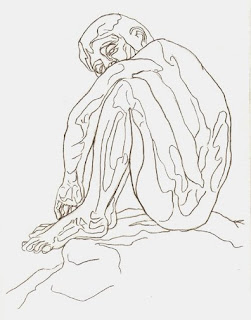 This drawing is one of several from a series reflecting on the Old Testament figure of Job. Eventually all the images will become watercolors on book pages. Traditional watercolor is a transparent medium, so it is very difficult to cover underlying images with it. When I paint with watercolor on book pages I also mix in a bit of white casein paint. Casein is milk based (though I’m still not exactly sure how that works) and is mixable and thinable with water. My use of casein with watercolor goes back to my freshman year of college when a visiting artist showed us his method of using the white paint with watercolor. I ended up using it because, when thinned with water, the casein becomes translucent and produces a fleshiness that simply can’t be achieved with watercolor alone.
All of the figures from the series are on pages from the Book of Job from a Hebrew Bible from the late 1800s. Painting directly on these pages is strictly prohibited by Orthodox Jewish law, so I’m sure there is a certain segment of the population that it will offend, though that is not my intent. In fact, it took me some time to reconcile myself to tearing pages out of a holy book so that I could drawn and paint on them. My Protestant upbringing, which highly values the Word of God above most other things, didn’t quite prepare me for doing this. When I first started considering employing this process in the late 1990s I questioned a friend who had been using Bible pages in his own art work for several years. He said that the first Bible he used had been brought to him by a student who found it in a mud puddle. Since the book was unusable for its original purpose at that point he figured he might as well do something productive with it.
That freed me up to begin incorporating book pages in my work. This particular Hebrew Bible I found at a used bookstore that I frequented in Idaho. It was laying in a box of books that had not yet been processed. It had no cover and was already disintegrating. I asked the shop owner what the price was and he asked me how much I had on me. Sold! For five dollars. No one could ever read this book anymore. The pages were coming apart every time it was opened to a new section. I decided that painting on these pages gave this book a new life. It was resurrected, if you will.
All of my work incorporating text gets back to the concept of Jesus being called the Word of God—the Incarnate Word of God. Physical presence and being, or an image, are placed in connection with the very utterance of God. Part of what this means, as the Gospel of John states it, is that the Word of God—in the form of the Law given to Moses—is made complete by the physical incarnation of that Word in the person of Jesus. This is complicated, but I wrestle with the concept as I bring the Words and Images together in one form.
For the Job series I wanted to explore some ideas of loss, pain, and anguish. Though I started the series around 2003 it seems even more pertinent now. When the American economy is pushing people to their limits and thousands of people are losing their homes and jobs, what can we learn from this story? Job was literally stripped bare. All his possessions, his family, and even his health were taken from him. Nothing was left. When we are left completely alone we have to confront ourselves. All the noise, possessions, people, and busy-ness of life can distract us from the most basic things, causing us to lose our true identities. These are not the easiest things to ponder, but they are essential.
Posted by Musings on Contemporary Art & Artists at 12:15 PM No comments: 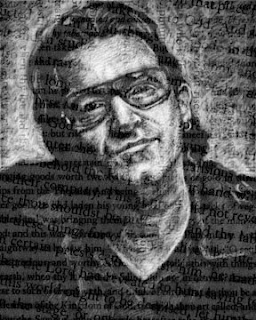 This image of Bono, of U2 fame, is part of a series of etchings inspired by readings from the Desert Fathers. While reading a portion of the Desert Fathers (4th century hermits who lived in the Egyptian desert) I was drawn to the concept espoused by one of these monks that we are each called to find the face of Christ in everyone we meet. This particular monk pronounced the ideal that, whether they are good or bad, we should treat everyone with the dignity and respect with which we would treat Jesus. I kind of vacillated on this. At first I thought that this was a great concept but not something that was humanly attainable. Then I thought that I actually DO treat the people I meet fairly well. Lastly, I realized that even if that is even partially true, it is only possible with the intervention of God’s grace, because we are all deeply flawed.
I tried to think of someone—anyone dead or alive—who would pose a challenge for me. The number one person popping into my head was Adolph Hitler. From there the idea grew quite naturally. The ongoing series is composed of twenty-five pairs of "portraits." There will be twenty-five images of Jesus drawn from art historical sources, paired with some of the best and worst figures from human history, with everything in between.
This black and white design is composed from the text from the Desert Fathers. I took an image of Jesus, Hitler, Bono, etc. and imported it into Photoshop. There I placed layers of the text over the photo and erased out the lighter values of the image. Once this was done four or five times I took the original image away and what was left was a similar image, but composed entirely of text. The images are transferred to a copper plate and developed with more traditional etching techniques. I’ll wait until another posting to explain just how the color process works and why I decided to use text to compose the images.
Posted by Musings on Contemporary Art & Artists at 9:42 PM No comments: 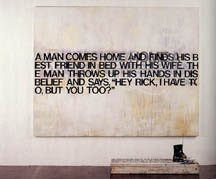 Richard Prince is a deeply confusing artist upon first observance. He would seem to have no specific style, or at least not a consistent one. Chameleon-like, he jumps from one style to another, but these various series are not actually completed one after another, but may start and stop at different times through his career.
Prince first came to prominence within the art world of the 1980s with a series of appropriated photographs. Taken from mass market advertisements for Marlboro cigarettes, these images were created by simply cropping and rephotographing scenes of the Marlboro Man. Text for the ads was omitted and what was left was the lone cowboy amidst a vast and wild nature.
Prince then moved to another series of images appropriated from advertising imagery. These tended to be triptychs of three similar images from various ads or images. These include three adult female heads turning and looking in the same direction. Similar images were sets of three high-end products like diamond rings all placed in similar surroundings.
Similar in materials was a series of biker chics taken from images in the back sections of motorcycle magazines. These depict the women in provocative, if not compromising, posses on the backs of their boyfriends’ bikes.
These works were followed with major jumps in materials, and seemingly, in ideas. The joke paintings (see image) evolved over time. They often have the text of some, sexist, racist, or off-color in one way or another, joke as their main subject but sometimes it is clearer and more legible than at other times. Some are obviously nods to some of the earlier work of Jasper Johns. And then, of course, there are the fiberglass car hoods. Patterned after the hoods of various hot rods, and sometimes built up on resin covered plywood forms so that they look like monolithic minimalist sculptures, these seem the most odd in the whole body of Prince’s work. And this doesn’t even cover all the various styles and images.
Honestly, I never paid attention to much of the work except for the text pieces until the fall of 2007 when I attended the retrospective of Prince’s work—Spiritual America—at the Guggenheim Museum in NYC. Everything kind of gelled together at that point. As I walked past the dozens of joke paintings I would invariably find someone laughing at a crude joke. I would have thought that political correctness would have prevented much of that kind of snickering in public, but then realized that this is part of the whole Richard Prince project. Every work and series of work is a comment on American culture and each series relates to the others in this way.
At the heart of the "American Spirit" that Prince comments on is this belief in endless freedom in a wide open, expansive western frontier. There is always more to conquer and Americans are the ones who can do it. Well, not all Americans. There are the peripheral ones which we accept as part of the culture, but most of us know that we are actually better than them. We are above the lower class trailer trash who ride Harleys in sleazy leather getups. They tend to be the same ones who value their souped up cars above everything else in life, making idols of them. And of course, we are above making or laughing at these offensive jokes. It is this "better than thou" attitude which Prince has narrowed in on. He is acutely attuned to middle class and upper middle class attitudes and realizes that there is little difference among the so-called classes in America. We all succumb to the advertisement-driven capitalist and consumerist culture in which we live and we have essentially bought into the concepts that are sold to us through commercialism. So, the joke is actually on many of us. Superiority may be the greater sin than laughing at a crude joke.
Posted by Musings on Contemporary Art & Artists at 9:33 PM No comments: