Georges Rouault: A Synthesis of Tradition and Innovation 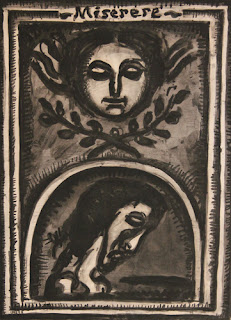 One of my artistic heroes is the French Expressionist Georges Rouault. Though he is still discussed in twentieth century and Modern art history courses, his name does not resound with most people as one of the elite Modern artists of his generation, such as Henri Matisse or Pablo Picasso. In a cursory comparison one would not find much in common between Rouault’s work and my own. His very direct and aggressive style seems at odds with my more “refined” realism. Still, Rouault’s primary work in both painting and printmaking, as well as his consistent themes of uneasy religious engagement with contemporary culture, can be aligned with my own work.

Rouault’s monumental print undertaking—one of the greatest all time achievements in printmaking—is his Miserere et Guerre. These large intaglio works, originally envisioned as two sets of fifty plates each (fifty for the Miserere segment and fifty for the Guerre), ultimately were produced as a total of fifty-eight plates. Still, that result is an enormous achievement. 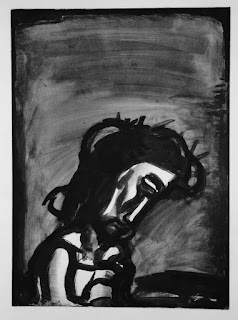 The suffering of Christ is mingled amongst the suffering of humanity in these works. What first seem to be awkward juxtapositions of images are quite intentional. The images are all dark, both in value and subject. Even images of the Virgin Mary seem stained with darkness. She butts up against images of wealthy, bourgeois women, as well as haggard prostitutes. She is the deliverer of salvation to both. The sadness and brokenness of the prostitute are balanced against the detachment of an elite, whose indifference and intractable hold on resources are partly responsible for the circumstances of the former. All are in need of mercy (miserere) and all are at war (guerre) with the world and their own condition.

The themes are further explored through kings, judges, clergy as well as skeletal specters of death. All of these expose the corruption of this world in some form. Christ suffers with and for each one. While the individual images may seem desperate and despairing, there is a strand of hope running throughout the entire series. 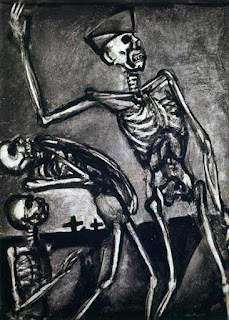 However, it is not just Rouault’s thematic elements that have held sway over me. His process for these works, and his unswerving dedication to seeing the work completed just as he originally envisioned, have been instrumental in my own current work. It took Rouault about fifteen years to physically complete the Miserere. But it was actually a project thirty-six years in the making, from the first drawing to the final publishing of the completed prints. Of course, he was working on many other paintings and print projects during that period, but I recently took comfort in this. My own intaglio project consisting of fifty plates, originally conceived almost twenty years ago, is probably more on schedule than I would have believed.

The original designs for the Miserere prints were actually ink drawings. Since Rouault’s work was always an odd mixture of tradition and innovation, the drawings were actually transferred to copper etching plates through a photographic process. Photogravure (sometimes called heliogravure) is an early photomechanical process that allowed photographic images to be printed on paper, from a photographic negative, without the fading that happened with earlier photographic prints. The photogravure work prints like an etching but looks more like a photograph. 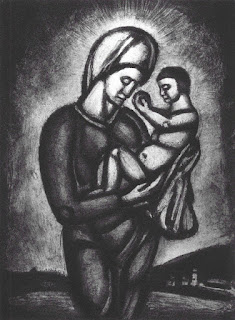 Rouault was not at all content with his initial photogravure plates and refused to allow them to be printed as they first existed. Instead, he meticulously reworked each of the plates with traditional forms of etching and intaglio, including hand working of the plates with mezzotint roulettes, scrapers, and burnishers. The results are far more than early photomechanical “reproduction.” Rouault did so much working and reworking of the the copper that it is often impossible to know what exactly he did to get the soft, velvety effects and deep, rich values. Many of the etchings look more like charcoal drawings than etchings. Each plate could be considered a masterwork, but considering that there are fifty-eight, it is an unfathomable achievement.

This brings me to the comparison with my own Palimpsest Portraits series. While there are many images of Jesus within this series, there are also “out-of-place” figures, just as with some of the Miserere works. I want viewers to analyze the series as a whole, much like the Miserere, to consider the unusual juxtapositions. Individual images may have a similar dark content as Rouault’s, but there is just as much similarity when it comes to the process. 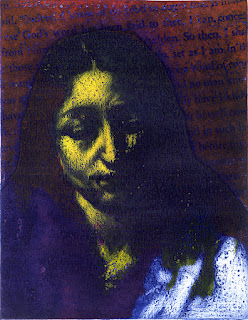 The Palimpsest Portraits, likewise, mix technological innovation with more traditional modes of working. Each of these plates starts with a drawing, too. However, my drawings are completed in Photoshop and are composed completely from passages of text. The next step is quite like the photogravure process employed by Rouault. I transfer the images onto copper plates via a toner-based transparency print (these are the transparencies used for overhead projectors which are printed through a copy machine or laser printer). The plate and transparency are slowly heated so that the toner offsets (or melts) onto the plate, eventually acting as a resist in an acid bath.

If I was only printing these images in black and white, most of the work would be done at this point. Still, also like Rouault, I do extensive additional work on each of the plates after the first photomechanical etching process has been completed. To enhance the realism, I use multiple applications of soft ground etching textures to soften and darken the tones. This is tempered through much scraping and burnishing. The textual elements still remain, but may be further enhanced with traditional hard ground etching. The plates are also developed to differing levels to allow for the color printing process. This allows multiple colored inks to both separate and mix in various ways to create the final effect. 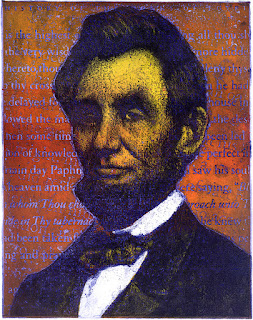 This is a time intensive process. There is no other way to achieve the effects required by the concept. Rouault has taught me that there is no need to compromise on your vision. Working and reworking these plates becomes a joy as I am surprised with each new plate. The new color combinations and alternate pairings of images continue to open the series in directions that far exceed my first thoughts about this series. I am pleased that the reception of these images by viewers will further expand how the pieces “speak” to each other.

Posted by Musings on Contemporary Art & Artists at 7:38 PM No comments:

Long long ago, I believe in 1999, I first started making some handmade, artist books. I participated in a weeklong book binding workshop at Whitman College in Walla Walla, WA. It was a wonderful experience and it led me to organize my printmaking courses in such a way that the students would print enough etchings or linoleum prints for everyone in the class, which we would then bind into books at the end of the semester. It was the perfect way for them to learn to edition prints and trade those prints with their classmates, plus learn a new process.

I mainly just try to get my editions of prints finished these days, but I remain committed to the physical codex-style book. No ebooks for me. I like to feel the paper, smell an old book, maybe even see what someone else wrote in the margins. Some may feel that I don't actually love books, since I do tend to tear them apart and paint on them. In reality, that is part of my love for them. Turning an otherwise ruined book into artwork gives it a new life.

Recently, I finally finished a book project that first began in 2007. This involved the second generation of Cathedral Floor Plan etchings that I started at that time. I started in on the plates in 2007, got busy, moved, and then they sat in storage until the end of 2016. The intent had always been to create an edition of six books that included these five etchings. The prints stand alone as individual works, but the book actually has text that explains the concept behind these works.

I made a video recording of the steps of binding the book together and the edited version of that can be found below. Hopefully it inspires a couple more people to take up the cause of the book in this digital age.


Posted by Musings on Contemporary Art & Artists at 4:05 PM No comments: