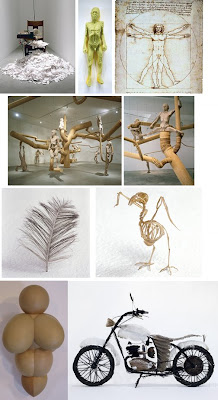 (click on the image to the left for a larger view)

When the term renaissance man is applied to an individual there is invariably one particular renaissance man who comes to mind—Leonardo da Vinci. The term is probably applied too liberally if the standard to match is da Vinci. Not only was he one of the leading artists of an era, his broad knowledge of the sciences and proclivity for inventing spectacular mechanical devices placed him on a different creative strata than others.

When applying this same term to contemporary artists most fall sadly short. If we are keeping to the Leonardo model the numbers are greatly diminished since most do not share the master’s breadth of knowledge and experience once they cross outside the borders of the art world. One Los Angeles area artist, Tim Hawkinson, is an exception.

Hawkinson has proved to be one of the most inventive artists of recent decades. His 2005 mid-career retrospective at the Whitney Museum of American Art and the Los Angeles County Museum of Art provided a substantial glimpse into his creative meanderings. The current self-titled exhibit (May 8 – July 25, 2009) at PaceWildenstein Gallery recognizes that Hawkinson’s exquisite creative talents remain far from depleted.

Somewhat reticent and reserved in person, Hawkinson’s work vacillates between the demure and disorderly. His use of materials is equally varied; so much so that it has sometimes been difficult to recognize a specific style. His work falls within a contemporary trend called Do-It-Yourself art. Hawkinson’s non-traditional materials come from anywhere and everywhere and his conscious choices of media denote multiple layers of meaning and symbolism for viewers.

Tim Hawkinson is far more like Leonardo da Vinci in attitude than style. For Hawkinson there is no apparent divide between the invention and the art. They are one in the same. Works like Signature (1993) are created from common household goods. The artist employed materials outside the parameters of typical mechanical engineering when he constructed a machine that endlessly writes facsimiles of his own signature. Viewers are encouraged to take one from the pile left on the gallery floor.

A work like Signature ties into a recurrent theme in Hawkinson’s work. The signatures are an extension of the artist’s physical body and its processes, even while they retain an element of his personality. This is another specific parallelism with da Vinci’s output. Leonardo’s famous drawing of a man inscribed within both a circle and a square—the Vitruvian Man—visually expressed the Neo-Platonic philosophy that dominated Florentine art of the Italian High Renaissance.

Leonardo clearly expressed the first century Roman architect Vitruvius’s theory that ideal architectural works should be based on proportional relationships found within the human form. By the time of da Vinci the Greek concepts of ideal forms were being revisited. This Neo-Platonism was then blended with the prevalent Roman Catholic thinking in Italy. In light of this, the body is seen not only as the measure on which buildings are based, it is a building unto itself. The human structure is equated with the temple of God (I Corinthians 3:16-17) and Leonardo expressed the Christian unity of body and spirit through the merging of the perfect forms of the circle and square, each containing the crowning achievement of God—man.

Much of Hawkinson’s work is directly connected to his own physical body. It is not simply autographic in the egoist mode, a tendency that can often exemplify contemporary art. Hawkinson’s work reveals the physical body epistemologically, as a means by which we know. One of his most recognized works incorporating this thinking is 1999’s Pentecost. The figures represented in this large installation are all based on the artist’s own body. The three dimensional modeling was achieved in a rather low-tech manner. As Hawkinson laid within a bathtub, photographs were taken of him from above as ink filled the tub at incremental levels. The revealed body at each of those levels was then replicated in sheets of foam to form nearly identical self portraits in a variety of poses.

The figures in Pentecost populate the branches of a tree made from hollow cardboard tubes. The work is kinetic and aural. When one enters a room where the work is installed he or she is greeted with a pattering of drum beats. Upon further consideration the sound is found to be the tunes of old church hymns tapped out on the tree branches by the figures. The sound is the Holy Spirit, which came to rest on the apostles on the day of Pentecost, providing them with the ability to speak in unlearned foreign languages. These physical beings are not only connected through the tree (the Tree of Life? after all, it is the mechanics of the tree that give the figures a life, a voice) but through a common spirit.

The use of the term Pentecost is a more overt reference to Christian terminology and theology, but Hawkinson provides subtle hints to the same throughout much of his work. A trio of Lilliputian works from 1997 also touches on these entanglements between physical and spiritual realms. More than both Pentecost and Signature, Bird, Egg, and Feather actually incorporate the physical matter of the artist. The diminutive Bird is a replication of a bird skeleton utilizing clippings from the artist’s fingernails and toenails, glued in place with super glue. Both Feather and Egg are made from the artist’s hair. In the case of Feather, super glue was once again employed to fix together single hairs into the form of a bird feather. The hair was ground into dust and made into a paste to form the shell for Egg.

Again, the bird references are acknowledgements of the spiritual. The dove is a traditional symbol of the Holy Spirit in Western art, but birds of all types are seen in many cultures and religions as messengers of the spirit. The use of the egg, in particular, can provide a symbol of birth, or even rebirth and resurrection. When one considers that Hawkinson is using the obviously dead parts of his living self in these works, bringing new life to cast off materials, resurrection is not an untenable symbolic reference.

More recent works revisit this avian symbology. The concept of an ideal physical form is considered from a different vantage in Bather (2009). Hawkinson incorporated actual egg shells when fabricating this replica of the Paleolithic Venus of Willendorf. Conceptions of ideal physical forms have not always remained the same throughout time. The fact that the natural curves of the eggs so easily mimic the curves of the ideal stone age woman suggests that ideal forms are tied directly to the natural world. There is an innate link between the physical and spiritual.

The masterwork of the current exhibit is Sherpa (2008). Looking to nature, Hawkinson observed that an ostrich plume recalled the graceful curves of a Harley Davison gas tank. From that initial correlation he searched for feathers from other birds that suggested specific additional elements of a motorcycle. The completed form is both concrete and ephemeral. It is not simply the substance of the feathers, but the aerodynamic styling of the completed form that alludes to a speedy journey—a path taken by the spirit.

These observations represent but one conceptual aspect of Hawkinson’s work. The majority of works coming from his studio have no connection to birds, though their recurrence conveys the importance of this theme. The examinations of physical and spiritual natures, their interrelations and particular properties, remain a thread that runs through all the work. The surface readings of Tim Hawkinson’s various projects produce a dizzying diversity of materials, methods, and subjects. Without commonality among those elements, the thematic underpinnings exist as a way to find cohesion within the full body of work. That, and his inventive approach. Hawkinson’s pursuit for new approaches to answer age-old questions reveals that the spirit of renaissance thinking is alive and well in L.A.

Posted by Musings on Contemporary Art & Artists at 10:34 AM