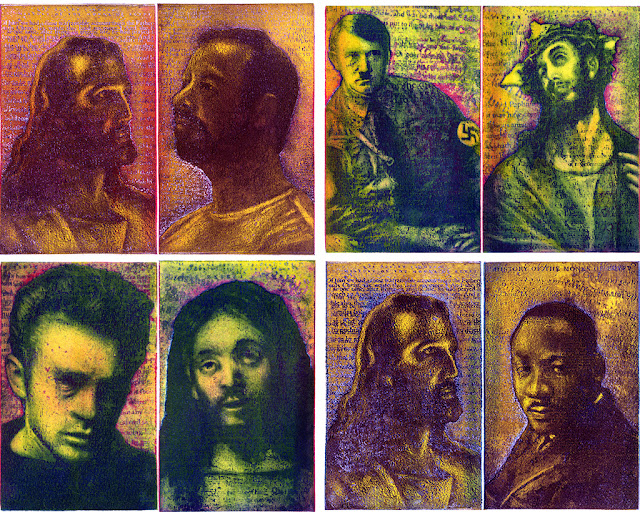 Note: The full funding goal for this project was not reached through Kickstarter, however, several generous individuals did fulfill their pledges directly To Tyrus so that he could begin a portion of the etching portraits. If you would like to give toward the completion of the funding goal, to see this project fully completed, you can do that through his website.
Posted by Musings on Contemporary Art & Artists at 6:41 PM No comments: 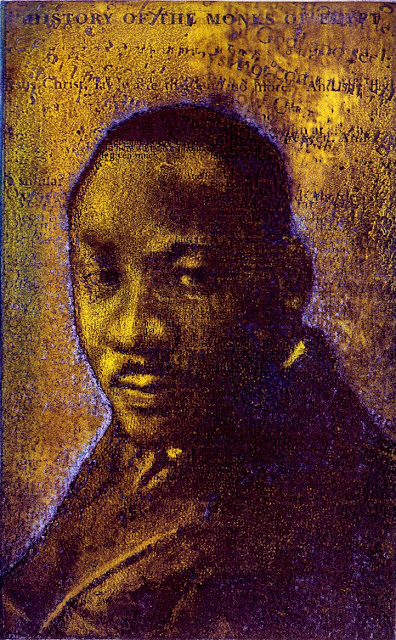 Posted by Musings on Contemporary Art & Artists at 5:29 PM No comments:

Love Letter: Foundations of a Family 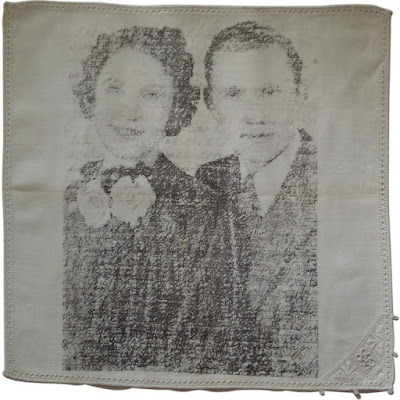 Anyone browsing through posts on this blog will quickly find that the presence of text and words within my artwork has been evident for about two decades. In paintings this has often taken the form of applying paint over book pages. When incorporated into printmaking techniques the combination has become increasingly integral to how the imagery is actually developed. At first, the layering of words and images was related to the concept of the incarnation of Christ—the Word made Flesh. While that idea remains in the background, I more recently have embraced the terminology of the Palimpsest for this process.

The origin of the term Palimpsest comes from an ancient practice. Before paper was developed in the West, the writing of manuscripts was often done on parchment (dried and prepared animal skins). Preparing the parchment was time consuming and expensive, so it was much more precious and less plentiful than paper would later be. If a parchment document was no longer needed or wanted, the text layer could be scraped off to erase the words from the document. This was ink, so the text was never completely erased. When a new text was written on the parchment the first layer was invariably still legible beneath. A parchment with both layers of text visible was called a palimpsest. 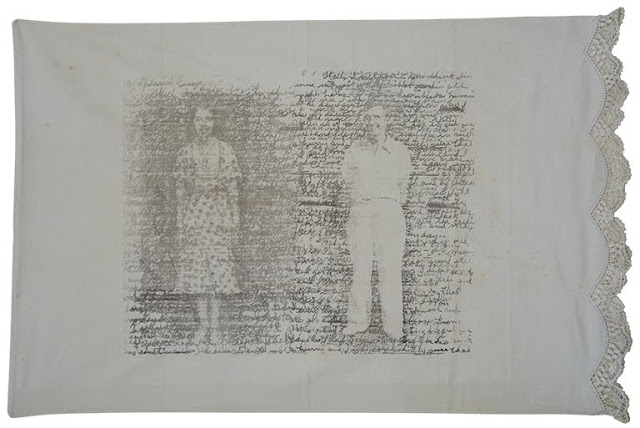 While I first began to develop the use of erasing and relayering texts to create an image with etching, I eventually employed the process for lithographic techniques. With both of these I actually develop the imagery in Photoshop. Portions of a page of text (often scanned as a high resolution file) are erased in Photoshop, then a new layer is added and more portions are erased, and so on. Eventually the values build up and the image is created from the words that still remain.

The images here are printed as polyester plate lithographs. These plastic plates can actually be fed through a toner-based printer or photocopier. The toner will attract the oily ink which can be offset onto another surface when run through a printing press, or even rubbed with a wooden spoon or baren to transfer the ink. The plate is wiped down with a wet sponge during the inking process, like any traditional lithographic printing. While there are multiple ways to develop a plate with this medium, I prefer to create the image in Photoshop and then print the plate through a toner-based printer and print from that matrix. 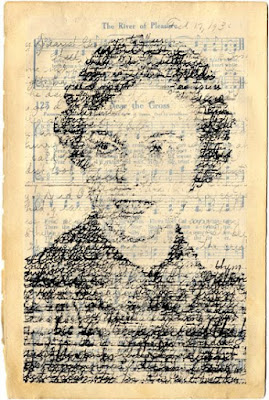 In these works I chose to recreate photographic images of my maternal grandparents which I then printed on paper, antique textiles, and even hymnal pages. This takes a bit of experimentation since some fabrics are more receptive than others. Also, any preprinted pages (like the hymnals) require several layers of printing. The first three or four passes are with a white or cream colored ink that deadens the text already printed on the page. The final layer is in black and it is enhanced by the underlayer of text. The “white” printing produces an additional erasure to that already created digitally.

The text that creates this image is actually from a handwritten love letter that my grandmother wrote to my grandfather in 1936, before they were married. The text that reveals their relationship materializes into a physical form in the prints. It recalls the physical manifestation of their union which was eventually my mother and her siblings, extending into future generations. While both of my grandparents have now died, the materialization of their love still exists in new generations. I believe that these works provide a unique visual metaphor—our words and their intentions are able to carry forth into the future as physical manifestations of who we ultimately are.

Posted by Musings on Contemporary Art & Artists at 1:15 PM No comments: