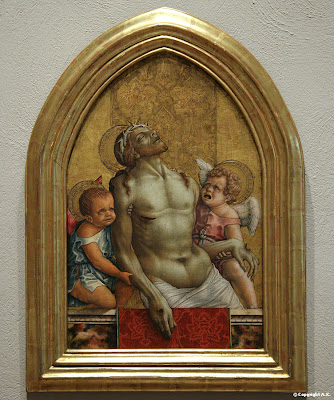 The narrative of the evolution of Modern art was transformed as the 1960s ushered in a cultural change. Any ideas that pure abstraction was aligned with a utopian ideal that would help us transcend the ills of the world were put to rest. People have not changed over the millennia. There are still good deeds and evil deeds; we hurt each other and may cause immeasurable pain. And while some contemporary people—artists among them—like to believe that we have progressed beyond religion and its “mythologies,” there is no denying that these belief systems point to universal archetypes that have been devised to explain our existence.
One of the most powerful images that crops up again and again is the sacrificial view of Jesus. While the concept of a figure sacrificing himself for the betterment of others is not reserved fully for Christianity, the unique image of the crucified Christ is so powerful that it is still inescapable within Modern and Contemporary art. All one needs to do is look at the work of Modernists during the mid-twentieth century to find that—even though Nietzsche had pronounced God as dead—the figure of Christ suffering on the cross was still a potent symbol. It was used by believers and unbelievers alike.
The current exhibition at New York’s Museum of Biblical Art (MOBIA)—Passion in Venice: Crivelli to Tintoretto and Veronese

—focuses not so much on the crucified Christ as the suffering Christ. The works in this exhibit range from the fourteenth to sixteenth century and were mainly created in Venice, Italy or the surrounding area. They are not the traditional Pieta’ images that one might associate with an artist like Michelangelo, but a subset that was born out of Venice’s connection to the Eastern church.
This exhibition provides the best elements of a MOBIA show. Rare Bibles from MOBIA’s own collection are paired with works borrowed from other institutions in the city—The Morgan Library and Metropolitan Museum—and beyond—Italian institutions and the National Galleries of London and Washington DC. The curators pulled together an exceptional exhibition that considers not only master paintings but some processional and liturgical works. The consideration of Christ as the Man of Sorrows within the context of the Eucharist and other rituals of the Mass helps to explain why the image of the suffering Jesus, or Christ-like figure, is so enmeshed in our collective consciousness. 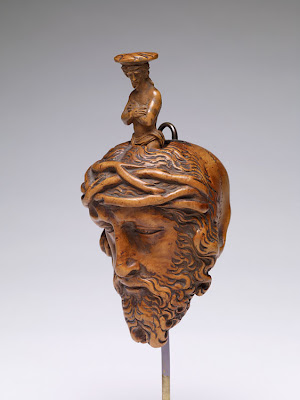 One of the prize works from the exhibit, Carlo Crivelli’s Dead Christ Supported by Two Angels, is typical of the minutely detailed work of this master. In this work, God truly is dead. Jesus is being laid in the tomb, supported by two infant angels. His flesh has been drained of all life and displays a rigidity. The wounds of his crucifixion are gaping and prominent. The grief of the angels, however, overshadows the figure of Christ. Their weeping eyes are sore and swollen from the tears. We feel the tragic state of all humanity.
A sixteenth century object within Passion in Venice is surely the most unique item in the entire exhibition. This small wooden sculptured head is considered a Memento Mori—a remembrance of mortality. One side displays the face of Jesus with a crown of thorns. On the reverse side is a sculpted image of a skull. The skull is not only a reminder of our short lives on earth, but a symbol of the crucifixion itself. The mount on which Christ was crucified—Golgotha—was called the place of the skull. However, the most intriguing portion of this interactive work is the miniature Man of Sorrows that pops up from the interior. Christ rises from the tomb of death in an act of resurrection. 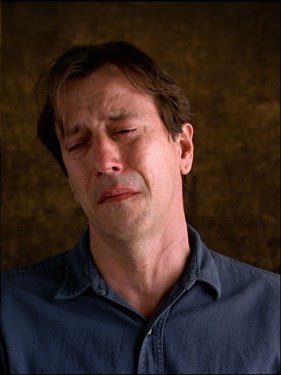 One final contemporary addition to the exhibition is the video work entitled Man of Sorrows, by artist Bill Viola. The essential difference between this work and others in the exhibit is the element of time. Viola manipulates time that we might sense the agony of this human sorrow. The male figure—not a Christ figure—slowly sways from side to side. His mouth and eyes open and close in agony. We can share in his emotion. Though Viola is influenced by Christian mysticism, his interests in Hindu and Buddhist practices have also formed his aesthetic. This work, from a series entitled The Passions, shows that the core concepts of ancient Christian works remain potent symbols for us today.
The breadth and diversity of objects in this exhibition are only hinted at here. The catalog

for the exhibit provides an excellent analysis of the pieces in the show, along with others. Passion in Venice continues the trajectory that MOBIA has set forth since its inception. It remains a unique institution that is willing to examine topics many other museums may not, in a scholarly way that proves they are a serious institution that has great things in store for the future.

Posted by Musings on Contemporary Art & Artists at 1:08 PM 1 comment: