Tickling the Ivories (or Plastics) 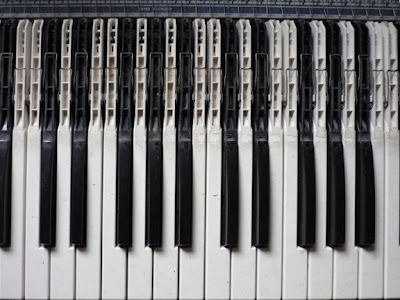 My apartment in Massachusetts was not only shelter, it was a place for entertainment. Aside from my landlord—the first floor resident during my initial year there—the rotation of neighbors made for some rather laughable events. There was the twenty-something stoner kid who regularly yelled the most unspeakable obscenities at his mother. There was also the lovelorn girlfriend/ex-girlfriend who came storming into my downstairs neighbor’s apartment late one night in a rage that was eventually followed up by a visit from the cops. Even my own apartment had some suspect activity when a prowler tried to break in on July 4th/5th at 1:30 AM—though that one wasn’t quite so humorous.
Typically, the activity was on a much more subdued scale. Either that, or I just missed much of it because I spent little more than my sleeping hours there. I believe I was asleep when the stray moose wandered about near my car during an autumn with unseasonably high rainfall. I adopted the mindset that nothing should surprise me. Still, I was a little shocked when my neighbors moved out and left an upright piano sitting outside, exposed to the elements. I figured that they were coming back for it soon, but after it sat through three rain storms I concluded it had been abandoned.
It wasn’t an exceptional piano though I suspect it had been decent enough. After that much rain it was in sad shape. Most of my family possess some musical ability. I even played about five different instruments at various times. That imprinted a great respect for musical instruments in me. This abandoned piano conveyed a sense of tragedy. Even so, I am ever the scavenger for art materials and I decided that I would dismantle the ruined object for wood and the keyboard.
It was a noble idea, It was. I could only arrange the task of demolition for a Saturday and the Friday night before my scheduled dismantling I found that my landlord (or more likely his father) had beaten me to it. The keyboard was gone, as was much of the wood. What remained—for a couple weeks—was the soundboard. I worked at that in vain. It was too heavy and well constructed to bend to my feeble attempts with hand tools. I salvaged some choice pieces of wood and sulked in my failure.
The piano keys remained as an object that haunted my subconscious. I don’t even know what it is about old, battered musical instruments that fascinates me. I had no specific plan for those keys. I often have no preliminary plan for objects that seem likely additions to an altarpiece/construction.
Once in a lifetime opportunities are sometimes not so limited. You can imagine my delight when I spotted an organ abandoned behind a thrift store down the street from wher I currently reside. It wasn’t quite the same thing as the piano, but it was a close second. I waited several days on the organ. Once the rains came I figured the organ was destined for the landfill. I then asked the manager of the store if I could remove the keys and she complied.
These two keyboards, from a rather cheap 1960s or 70s era organ, were not quite as lovely as the piano keys. The poor craftsmanship made for a much easier job of dismantling, though it still took a few hours. I had to take apart nearly all the larger component pieces to get to the keys. I was actually kind of doing a favor for the thrift store since the remaining parts were now ready to be thrown into the dumpster; the staff didn’t need to arrange and pay for a special trash pickup.
This is the part of the story where I normally explain some detail of how the object or item will be used in an altarpiece. Sorry to disappoint. I’m not there yet. I’ve worked on some preliminary sketches but everything feels forced so far. It may be a couple years before the concept congeals. I do know that something unique will come from the discovery. When a coveted object makes itself available—twice—you have to trust that it will be used in the right time.
Posted by Musings on Contemporary Art & Artists at 10:24 AM

I look forward to hearing of what comes of the dismantled instrument. I once had an old piano that was no longer good for playing and it almost turned me into a visual artist myself as I just couldn't imagine the wreckage rotting in a dump. Sadly, we had to put it down...never an easy down for a piano player.

Well, you are amazing Mr. Clutter. I thoroughly enjoyed your woven tale regarding the ivories and look forward to learning what you did with the organ keys. I also remember your family and their many musical talents.