Lucian Freud and Jenny Saville: The Full Weight of the Body 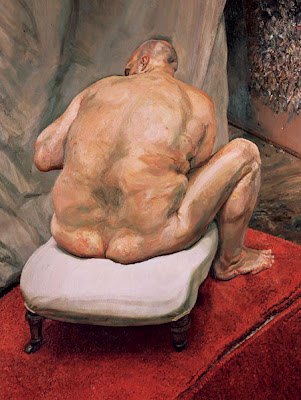 Rumors concerning the death of painting have perpetually surfaced for half a century now. Yet the pluralism of postmodernism has left sufficient room for this more ancient form of art to remain. That being said, the role of the realist figurative painter seems to shrink a little more each year. In Britain, however, which has tended to champion some of the most innovative and non-traditional artists for the better part of two decades, there remains an unbroken line of figurative painters.

This is not an endless chain of teachers and pupils who pass down a strictly academic style of paint application, technique, and style; rather, there remains a continual fascination with the human form and its attendant psychological trappings. The subject of psychology and matters of the mind naturally brings us to the grandson of Sigmund Freud—Lucian Freud. Freud, the painter, has been hailed by many as the most important contemporary figurative painter for the past few decades. 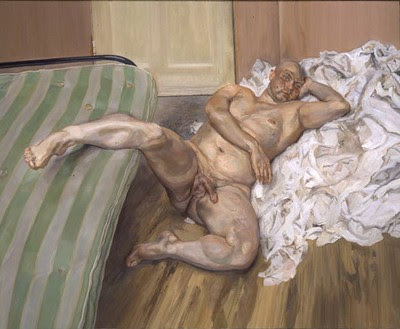 Psychological states are certainly integral to Freud’s canvases, but physicality is really the dominant feature. The painter’s style, which began in a more surrealist vein, progressed to a maturity based on the physical qualities of the paint itself. By the 1980s the paint was not just a tool employed to present a facsimile of a human form on canvas. The encrustations of the medium and pigment on the canvas surface took on a substantial physicality of their own which bore the fullness of human presence.

The broad view of Freud’s work suggests an interest in humanity’s complexity and dignity. Again, as the work matured, the scenes depicted became less like staged theatrical productions—less like historical or mythological scenes of the past—and more like the focused gaze of an artist within his studio. Aside from strict portraits (most notably his 2001 portrait of Queen Elizabeth II), the bulk of Freud’s paintings are quite obviously models posed within the arena of the artist’s studio. 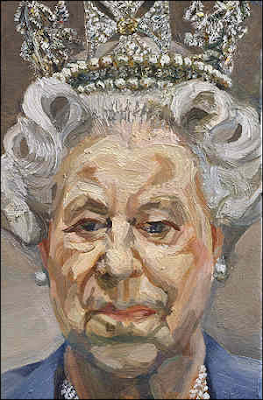 By stripping away the props and accoutrements of some fictional, staged scene—and often the model’s clothing—Freud directs our focus on the person or persons as he views them. These are typically friends and family members. The artist feels a need to know his models. The result is that his familiarity produces such a high level of vulnerability (on the model’s part) and scrutiny (on the artist’s part) that we are drawn past the magnificent surfaces into the hidden psychological aspects below. This forms a grafting of the physical with the psychological.

Freud’s work is often linked to the confident corporeality of his subjects. Rotund figures with excessive mounds of flesh have become a trademark. At times these figures seem little more than an exercise in the mastery of materials. The protuberances of paint are a stand-in for the folds of flesh, though a mere masterful bravado is seldom the end. The starkness of these immense figures within the limits of the studio space provides a glimpse beyond their sheer fleshiness and beyond that sole trait that we most often associate with an obese figure—the immensity of his or her physical body. 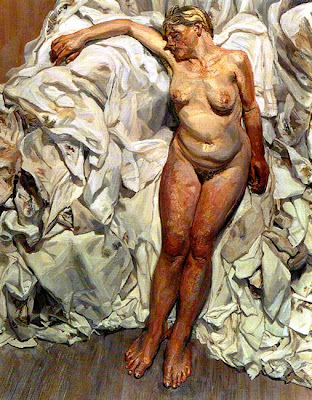 One of Freud’s most notoriously fleshy works—Benefits Supervisor Sleeping—sold at auction from Christie’s in New York in 2008 for $33.64 million.The estimated selling price would have made it the highest selling work by a living artist at that time. Yet all the publicity aside, this painting brings several signature elements of Freud’s work into alignment. The fleshiness and encrusted paint surface are coupled with the placement of the figure inside a studio setting, in a pose that heightens the sense of her physical weight with psychological heft. Still, the work is steeped in the tradition of the male gaze and the complicated heritage that that implies after the introduction of feminist theories.

Fellow Brit Jenny Saville approaches the figure with the sensibilities of a younger generation. She keeps one foot firmly planted in the figurative tradition that includes both Freud and Francis Bacon, but she is also ranked among the YBAs (Young British Artists) who rose to prominence in the mid-1990s. Her contemporaries are artists like Damien Hirst. Both artists were included in the infamous Sensation exhibition that induced cultural tremors when displayed at the Brooklyn Museum in 1999. Saville’s work may seem conservative in comparison to Hirst’s, but something more than a cursory glance reveals shared traits with the other YBAs. 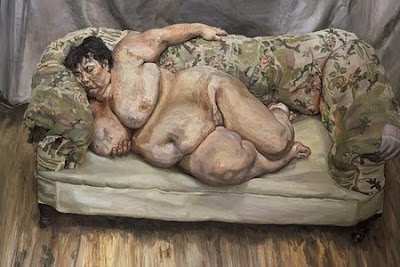 Saville’s images are typically viewed through the lens of feminism, but that is too narrow a construction. The paintings that exhibit lines and shapes drawn onto the naked skin of fleshy females (Plan) imply the pre-surgical markings of a plastic surgeon. The artist actually observed plastic surgeries in the year after her art school studies. While there are connections to body image and the pressures placed on women in contemporary cultures—worldwide and not just in the West—the work is more expansive than that. 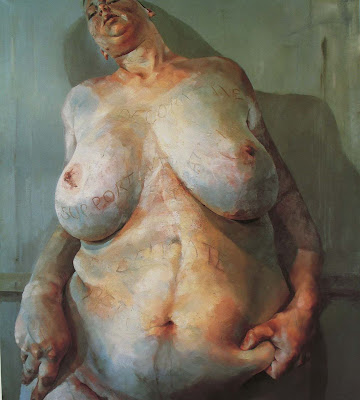 Saville’s figures do not merely exhibit a density of flesh, they often allude to severe physical traumas. The figures are wounded at times, yet the viewer is uncertain whether these are self-imposed traumas or the results of living in a tragic, broken world. Hybrid (1997) seems like a patchwork quilt of skin—a body mismatched to its ill-fitting parts. And this idea of not necessarily feeling at one with the body is a recurring theme in Saville’s work.

The displacement is most noticeable in the works of transvestites and transsexuals. There remains a uniquely female gaze, even in these works. To take these specific paintings on their own, divorced from Saville’s entire oeuvre, is to misread them. Saville is not simply concerned with issues of gender identity, nor even the finer points of feminism. Her work rings truer when linked to the universal theme of self identity. 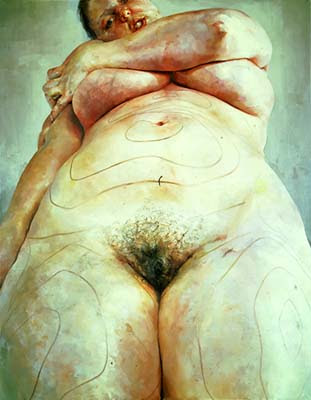 Like Freud, Saville is exploring the linkage of body and soul. The physical weight sensed in a representational style and the inflictions enacted on Saville’s figures both allude to the woundings of the psyche and the immensity of existential crises in modern and contemporary human beings.

The adoption of the figure as the primary image in periods following the rise to prominence of abstraction and non-objectivity can be risky. It has sometimes been aligned with a non-progressive traditionalism that has been touted as irrelevant. The Greenbergian criticisms that still echo through contemporary art criticism favor elements of the chaotic and performative. And while analysis of art in these terms has trickled down to our larger culture in diluted forms like "reality television," it only subtly impacts the thinking of the average person. That is a primary reason why the figure has not disappeared in contemporary art. Its presence acts as a necessary ligament connecting the ordinary person to his or her place in the wider world. 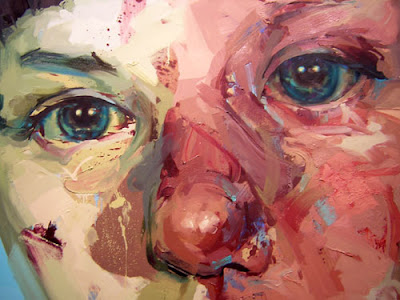 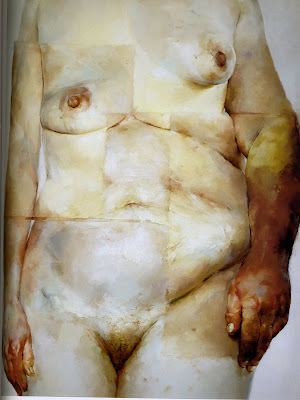 In viewing the paintings of Freud and Saville we are each confronted with more than naked humanity. Ultra-physical bodies resonate with our own primal needs to uncover the complexity of being—physically and spiritually—and the implications that hold sway over our every day existence. This is why figurative work will never go out of fashion; our figure-to-figure relationship with artwork is a basic and necessary human experience.
Posted by Musings on Contemporary Art & Artists at 12:08 PM

Tyrus, one of the really interesting things to me about the first two male nudes you use as examples of Freud's work is that they are of Leigh Bowery <--google). Leigh Bowery was a very large man who created outrageous costumes and personas that he would "perform" in at discos and other public places. Outlandish and freaky. So, to me, the Freud paintings of him seem all the more poignant. Freud's paintings (and Saville's as well) are a bit scary to me, but knowing what I know about his model, I have a better appreciation for his "interest in humanity’s complexity and dignity". Thanks.

Yes, Bowery is a completely other topic in his own right! I didn't want to be sexist in my posted images so I added these male images to balance things. I recall reading about him when these works were first seen in the 1990s.

Love it! wish I could write like that! want to write my dissertation!! I'm trying to think of a subject along the lines of Saville and contemporary figurative painters so any more articles along these lines are most welcome!!

thanks so much for this wonderful incite! this blog has helped me a ridiculous amount with my art A-level, thank you again!