So abideth these three: faith, hope, and… charity? 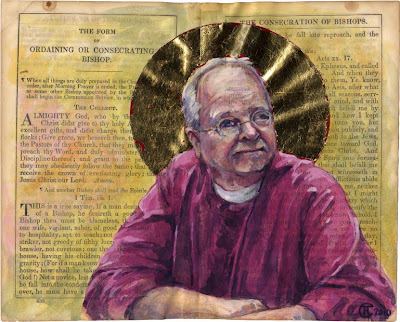 In 2009 my series of saints watercolors was broadened to become a series entitled Saints, Sinners, Martyrs & Misfits. Originally, these small paintings on book pages were a simple extension of my altarpiece constructions. Many of the paintings were of figures already found in those altarpieces. When I extended the watercolor series into a broader concept it was, in part, because of the work I was also doing on a series of etchings, in which I have been exploring some ideas that came from my readings of the Desert Fathers.

The broader concept of the Saints, Sinners, Martyrs, & Misfits has allowed me to conceive of some subplots, as it were, within the series. The images included here compose one of those subplots. Having grown up within a fairly strict evangelical setting, my move to the Anglo-Catholic/Episcopal fold seemed quite a leap to many. The Episcopal Church has been in the news for much of the time since I have made this switch. The controversy that has split the denomination has surrounded the ordination of Gene Robinson as a bishop—the first openly homosexual bishop in a relationship with someone of the same gender.

The controversy over the legitimacy of Robinson’s seat is not really my concern here. I have friends on all sides of the controversy. Some of them are in churches that have led the way in realigning Episcopal congregations under alternate Anglican leadership, sometimes under bishops not even in the United States. Others have been involved in church splits where some wish to weather the storm within the Episcopal tradition and others desire to stay in the Anglican communion, though not in the Episcopal Church proper. There are also my more fundamentalist friends in other denominations who simply throw up their hands and say the Episcopal Church is just an apostate organization and Bishop Robinson’s ordination is proof of its heretical theology. Every one of these stances has strong points within its arguments, but certain people on all sides seem to be missing something in their behavior concerning the tempest—charity. 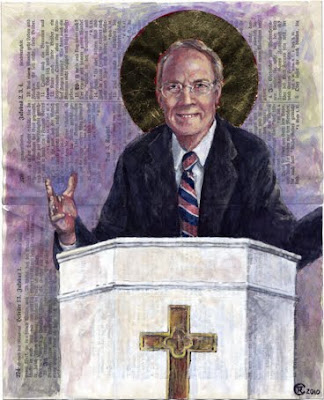 Along with Gene Robinson, I have produced a watercolor of James Dobson of Focus on the Family. Dr. Dobson—from the Wesleyan Holiness tradition—seems to be the polar opposite of Robinson. And while Dobson’s son Ryan was in my circle of friends during my freshman year of college, I’m not championing one figure over the other. Dobson and Robinson, instead, represent the extremes of this controversy and the ensuing debate.

Somewhere in between is Ted Haggard, former megachurch pastor and former president of the National Association of Evangelicals whose fall from grace, because of an extramarital, gay relationship, left him as a pariah within evangelical circles. He also became the laughingstock of the liberal gay subculture who saw him as the prime example of a hypocritical Christian. All three of these men represent the complexity of this issue but also the extended problem.

Some Episcopalians see Robinson as the figure who will move the denomination forward into an enlightened age. He is a saint in their eyes, even though he is still living. The persecution he has received from some individuals in the press and from some associated with organization’s such as Dobson’s Focus on the Family, has landed him in the role of martyr. Yet some of Robinson’s supporters would be equally willing to vehemently denounce the work of Dobson and his organization, as well as any other conservative evangelical group that upholds traditional biblical interpretations on homosexuality. 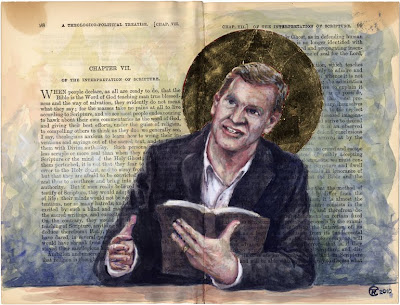 On the other side are the evangelical masses who see Dobson as a holy warrior, leading the charge against the demise of the Christian church within America. This powerful political and religious segment of the population has, at times, been represented by individuals who have picketed and shouted threats at prominent gay figures such as Robinson. They are often called to action by people like Dobson, and formerly by Haggard, though their sometimes questionable actions remain their own.

Both Robinson and Dobson are simultaneously elevated as saints and the worst of sinners by those who both support them and oppose them, respectively. They are saints and sinners at the same time. Oddly, this is the position that most any Christian would claim he or she exhibits at any given point in time—saved by grace, but also prone to fall into old, sinful habits. It is one of the many dichotomies of the Christian faith. Haggard personified this dichotomy publicly. He was at the pinnacle of evangelical power and progress while secretly living a double life that eventually destroyed his respect and career. Since that fall, he has restored the relationship with his wife, but has found that conservative Christians (including many from his old congregation) have been far from forgiving and compassionate concerning his plight.

These three works and these three men represent the state of affairs in American Christianity, not just the Episcopal branch of the faith. The gay debate is perhaps just the greatest attention getter, though it is far from the only dividing element. The question is, for those of all theological stances, “How are your actions showing the love of Jesus to those you consider to be your enemies in this debate?”

Just over a year before I made my switch to the Episcopal Church I witnessed something that illustrates this problem well. I was fairly new to Massachusetts and had been asked to present an evening series on art and faith at a church in Boston, over a five week period. This was at the height of the debate on gay marriage in Massachusetts, just before it was legalized by the state legislature. I took the train into the city and rode the subway to the Boston Common (Park Street) station. From there I walked a path past the State House to the church. Every time I passed the State House I witnessed two opposing masses of picketers spewing vitriol at each other (and for the television cameras). I know that there were people on both sides who would have claimed that what they were doing was because of their Christian convictions. I just had a problem finding the countenance of Jesus on any of their faces. It reeked of hatred and not love. No matter what I think of someone’s theological stance, I expect to find compassion and love at the heart of his or her actions if that person claims to be an agent of God’s grace.
5J5G88KGVPG8
Posted by Musings on Contemporary Art & Artists at 9:30 AM

Hello Tyrus. There are so many wonderful posts in your blog and so many places where I can see that you and I are "mining" the same questions and concerns that I wasn't sure where it would be most appropriate for me to leave a comment. I've chosen this one, as you've touched on a topic very close to me. Thank you for what you've written here. Your commitment to see the face of God in every being is evident in your words and is backed up in your art. Wrestling with angels is hard work.