The Sacred Body by David Japser 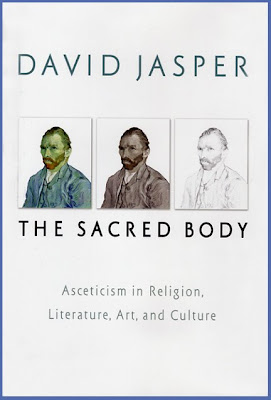 
David Jasper’s recent book, The Sacred Body, explores the body through the lens of the ascetic desert tradition, via the forms of art, film, poetry, but especially literature. The author’s background as a teacher of literary theory is apparent in his analysis of all these forms.

While Jasper explains that the text is formed as a continuation of his earlier book The Sacred Desert, this volume, at times, tenuously connects the body to the desert tradition. The reader may easily find herself drawn deeply into what initially appear as various, meandering side discussions only to discover Jasper ultimately forming his connection to the desert through some obscure contextual twist. Since Jasper filters his processing through philosophers from Heidegger and Kant to Derrida and Foucault, it is not surprising that his writing can sometimes read as densely as contemporary philosophy.

Some of the more absorbing aspects of the analysis are revisited throughout subsequent chapters. After an examination of the hagiographical evolution of the figure of St. Mary—transformed over time from Mary Magdalene, to Mary of Bethany, and finally Mary of Egypt—Jasper extends his discussion of the body’s ascetical relevance with an exploration of the character parallel to St. Mary of Egypt in Paul Bowles’ existentialist novel The Sheltering Sky and the adaptation of that work in Bernado Bertolucci’s film of the same title. He rounds out the discussion of the desert life of St. Mary through his commentary on Diego Velazquez’s painting Christ in the House of Martha and Mary. Just as the character of Mary evolves from the historical person(s) to whom she is connected, Jasper’s analysis progresses. The carnal aspects of Mary are tempted and tempered in each art form as her spirit seeks to conform to the guidance of the desert path.

Jasper’s fresh eye on visual art—considering artists as various as William Blake, Hans Holbein, and Vincent van Gogh—is similar to Henri Nouwen’s. It resides somewhere between the explicitly theological and the intimately devotional. He is aided at times by the writings of art critics Arthur C. Danto and Leo Steinberg, which is a welcome supplement to his own analysis. Jasper is clearly more comfortable when he stays closer to his literary roots. His scrutiny of the Hans Holbein painting The Body of the Dead Christ in the Tomb relies heavily on the discussion of that work within Fyodor Dostoevsky’s The Idiot. Like Mathias Grunewald’s Isenheim Altarpiece—also discussed by Jasper—the Holbein work focuses on the scourged and crucified corpse of Jesus. Both of these paintings establish a transformed understanding of the physical being—focusing on a glorified body. Christ’s taking on of mortal human flesh is pushed to the extreme when these artists examine the death of God and the perplexities and mysteries of the incarnation through the divine Word made flesh. Yet for the flesh to be renewed and resurrected, it must first suffer death. Jasper addresses this significant point in relation to ascetic practices, not simply glossing over the expansive implications of Christ’s incarnation as paralleled in the way of the desert.

It is Jasper’s knack for mingling odd bedfellows that produces some of the most satisfying "perplexities" in the book. The works of Meister Eckhart and James Joyce form the core components of a chapter devoted to holiness and the resurrection of the body. The mystical contemplations of Eckhart may seem a natural match for a discussion on the holiness sought in the desert. It is the pairing with Joyce’s Finnegans Wake that comes as an initial surprise. In Joyce’s work, Jasper finds a parallel to the incarnation of the Word. The reader must be fully present in the text, a text that reveals itself—if somewhat opaquely—through its aural recitation. In both Eckhart and Joyce the reader is lost within the poetry of the words, becoming one with the text just as the ascetic believer seeks to be united with the holiness of Christ.

Jasper concludes his analysis with a chapter that acts as a template for future theological readings—whether pure theological texts or theology nestled within the guise of the various arts. For Jasper, the ascetic tradition is simply a system by which one lives out life liturgically. We may each approach our lives through an ascetic lens if we choose. Jasper offers possibilities of bodily "dwelling" in this life through the ascetic tradition. He suggests dwelling: on the edge, in anticipation, as vigil, with consistency, at the end of history, in dispossession, and in perfect joy. These approaches are meant to act as filters that usher us into the way and wisdom of the desert.
Posted by Musings on Contemporary Art & Artists at 9:57 AM