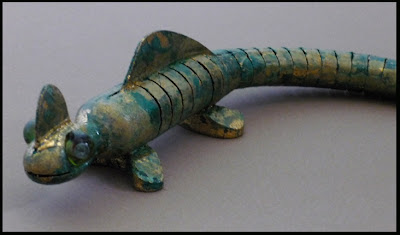 Having a variety of interests can pose a challenge. For me, it has never been quite like the saying about the Jack-of-All-Trades, but dividing time among a multitude of interests certainly takes time from those things about which one is most passionate.

In the late 1990s, when I was teaching full-time, I tended to use the semesters as a time for reading, research, and sketching. Printmaking, particularly, was accomplished in the summer months. In those months there was plenty of time and no one else using the studio. When I was later working full-time as the director of an art non-profit there were no summer breaks, though I kept generating complex ideas for future artworks.

Having the ability to devote nearly all of my time to producing art over the past year and a half opened my eyes to something. I can never keep up with all the ideas. Even though I am producing exponentially more artwork than before, it takes time to actually create it. While carving a woodblock or painting on a book page a new thought is bound to enter my mind—another rabbit hole is opened and the chase begins again.

Occasionally, the reason I take several years to complete a piece has nothing to do with the time it physically takes to complete it. Many of the altarpiece constructions are developed through sketches and the assemblage items are devised at that stage. I often have some items collected already, awaiting an altarpiece in which they can be placed. At other times I imagine an object I would like to use, but then I have to search to find it. 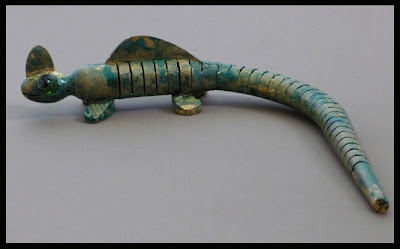 The hunt is always on. I have previously relayed stories on this blog about my search for chattering teeth and doll parts. My great white whale, for several years, was a chameleon figurine. Aside from eBay and Google searches I have looked at dozens of flea markets, antique stores, and junk shops everywhere from New York City to Los Angeles—I mean this literally. There was a glimmer of hope in New Haven, CT when I spotted a plastic chameleon in a shop window display. It was, unfortunately, there for effect but not for sale.

When I recently stopped into an arts and crafts supply store, for an unrelated item, I spotted a wooden lizard. It was a somewhat generic lizard, but I knew it could easily be transformed into my reliquary chameleon. After I bisected a glass bead, for the eyes, hollowed out some eye sockets, and applied paint and gold leaf, the chameleon was complete. One of the best parts is that it still functions like a child’s toy—giving it a certain Joseph Cornell air.

I imagine that through all this discussion you may be wondering, "Why would you place a gilded chameleon in a reliquary anyway?" Without divulging too much about the work in progress, I will mention that the chameleon reflects the very sentiments with which I began this essay. Many of us live multifaceted lives in which our various interests cause us to become "all things to all people."

Political correctness has so subdivided our society into various, predetermined, sub-cultural roles that we often find ourselves exhibiting one form of behaviors in one setting and a completely different set in another. While I am not implying that we are being untruthful or immoral in any of these actions, I do suggest that this belittles the complexity of who we are as human beings. We cannot be defined by checking off the boxes that best describe our main interests and personality traits.

In order to navigate this complex terrain we have learned to acclimate to each new circumstance. The chameleon-like ability to do this is held sacred to many. Considering that most of us will now change careers nearly half a dozen times in our lives, this might be thought of as an asset. Conversely, we may want to criticize a culture that vigorously opposes any ambiguities or "seemingly" antithetical beliefs or interests held by an individual. Philosophies and ideologies are far from perfect and it will take our entire lives to decipher our personal belief systems. These will also change and transform over time. The chameleon is, therefore, an accurate portrayal of our human growth and self understanding.
Posted by Musings on Contemporary Art & Artists at 8:54 PM

Hi, Tyrus, ifinally got timeto look at your Cathedral floorplan series. I love the way the prints emphasise the cross design of a cathedral. Very creative.

If you have any time for novel reading, I just finished and loved TO SAY NOTHING OF THE DOG by Connie Willis, about the history, destruction and fictional rebuilding of Coventry Cathedral. My own A VERY PRIVATE GRAVE about the history of St. Cuthbert will be released this summer.