Subdodh Gupta: Reflections of a Culture in Flux 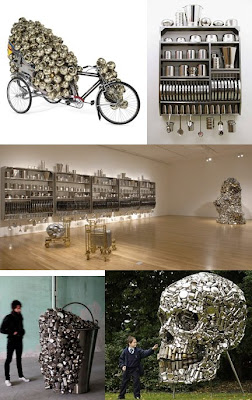 The global economy is here to stay. Often, we are unaware of just how much globalization impacts nearly every hidden corner of our lives. While we all became more cognizant of the effects of a world market on our individual lives and fortunes when the stock market took its massive dive, most people are unaware of how globalization has impacted the contemporary art market. The steady growth in the importance of contemporary Asian art has been a prominent topic within the art world for a decade. Most of the conversation tends to focus on art from China. Even though China is the recognized economic powerhouse, the economy of India has seen a similar expansion.

A popular theme for many of the contemporary Asian artists is the rapid industrialization and Westernization of these cultures, along with the impact that has had on societies that were overwhelmingly rural until quite recently. These are also societies that were steeped in philosophical and religious traditions far different from their Western counterparts. The ensuing culture clash has placed these societies on somewhat shaky ground, while the art of these cultures has been catapulted to an almost equal footing with that of leading Western artists.

Subdodh Gupta, an Indian artist of international renown, produces work that traverses this tightrope of a culture in continual flux. Gupta, now in his mid-forties, grew up in a more traditional, rural village in India. The span of his lifetime has witnessed incredible shifts and changes in Indian society. Gupta uses the language of contemporary art, along with materials from traditional Indian life, to weave together works that investigate these cultural paradoxes.

The tradition of the Readymade—popularized by Dadaist Marcel Duchamp—is often referenced when critics discuss the work of Gupta. Duchamps’s Readymades, which brought into question the suitability of materials and the choice of the artist in the designation of an object as art, set the agenda for much of the work produced in the twentieth century. It is Duchamp who is ultimately responsible for the abundance of contemporary artworks that, in the eyes of many viewers, do not actually seem to be "art." Because Gupta incorporates everyday objects into his sculptural works this is a fair assessment. However, Gupta’s penchant for compiling multiples of similar objects is better compared with the works of Arman. And like Arman, the masses of everyday objects take on a heightened sense of significance within Gutpa’s sculptures and installations.

One of the perennially favorite objects that Gupta places in accumulations within his works is the metal cooking and storage vessel—the tiffin pot. The vast majority of contemporary Indians have carried their lunches in these pots while growing up. They are also used for food storage within the home. In many ways the pots act as an equalizing element within the artist’s work. Indian citizens from all different classes or castes would have a personal relationship to these pots. The mass quantities allude to the burgeoning industrialization of the Indian society. Their shiny metal appearance—in stainless steel, aluminum, copper or brass—is more in keeping with a technologically advanced society than a rural, agrarian life.

That reflective surface is not just a seductive aesthetic element but the mirror that Gutpa places before his fellow Indians. What does the contemporary Indian see when gazing into the reflections of these vessels? Images act like a house of mirrors at the carnival—they are distorted and seemingly unnatural. The images bear a resemblance to things known but they are cast into new and unfamiliar forms. Indians see their not so distant past in light of a rapidly transforming present.

Many assemblages of tiffin pots are simple recontextualizations of the materials. Like Tracey Emin’s infamous bed, Gupta’s pots bring the contents of the home into the gallery. Unlike Emin’s work, the pots are void of personalized nuances. These are not Gupta’s private cooking pots but the kitchen utensils of the millions. They are blank canvases upon which each individual Indian places his or her own memories of a life that is disappearing and a culture that is in a constant state of flux.

While Gupta may incorporate pots into assemblages that appear like transplanted corners of a modern Indian kitchen (similar to Damien Hirst’s Pharmacy works) others transcend the day-to-day utilitarianism to become something else. Cheap Rice gathers dozens of tiffin pots with another familiar object from Indian society—the rickshaw. The seat for the passenger in this rickshaw is overflowing with pots. There is barely room for someone to even pedal the mass of pots to a destination. Again, thoughts of caste are brought to mind. The wealth and position of those in a higher caste—those who have the means to possess an overabundance of food—is pitted against the poorer, lower caste worker who would provide this kind of transportation. Yet the rickshaw can also be seen as the vehicle of modernization that is pulling the masses within Asian cultures into an industrialized, mechanized, and technologically advanced world.

Very Hungry God (2006) may well be Gupta’s answer to Damien Hirst’s For the Love of God (2007). Instead of creating a skull from diamonds, Gupta, once again, utilizes the tiffin pots. The concept of vanitas is part of the theme of both works. Interestingly, Gupta is co-opting this concept from the West. True, the skull makes appearances in Indian art from the past several millennia, but the use of a sparkling skull made from reflective surfaces cannot be separated from the history of art in the West. This is one of the aspects of the global art world that is being worked out day-by-day. Postmodernist theories had already begun to break down the barriers between cultures over the past few decades. The internet and the world economy have diminished further distinctions.

Art and artists of the West began to highly value elements of Eastern culture and society in the twentieth century, and even as early as the mid-nineteenth century. Artists like Mark Tobey studied Asian calligraphic techniques as they perfected their own brands of abstraction. And now the reverse is happening as the East has opened more and more to the West. The hybridizing may be pushing us to a "world art" that lacks the distinctions that were natural when physical borders kept cultures in isolation. That isolation is all but forgotten now. The click of a computer’s mouse puts people from around the globe in touch with elements of cultures that were overwhelmingly unknown decades ago.

What Gupta’s work is able to do is focus on some questions. Like the best art in any culture, it doesn’t answer questions so much as ask the right ones. Is this rapidly changing world where cultural distinctions blur good or bad? Does the homogenization allow us to take the best from each society to make a better overall human experience, or does the loudest voice with the biggest bank account win out? It doesn’t matter so much whether be reside in the East or the West, these are the questions that need to be considered as we move forward in an ever-changing world.
Posted by Musings on Contemporary Art & Artists at 11:59 AM