Floating to Earth: The Multifaceted Art of Carolyn Shadid-Lewis 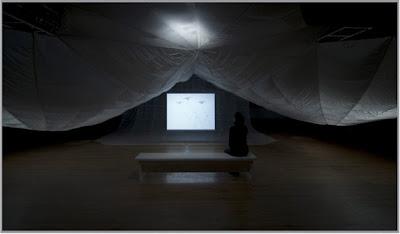 Art exists to put into visual form something that words alone cannot express. Sometimes it is actually a combination of elements that come together to create this expression, but when the various pieces are amassed, something much larger is uncovered. It is a privilege to see those elements coming together. Few have the benefit of observing this somewhat private practice. I had the opportunity to view the various stages of production of a recent work by Carolyn Shadid-Lewis. The following is a glimpse of her creative process.

Shadid-Lewis is an interdisciplinary artist. Her background as a child growing up in a military family weighs heavily on her art production. Particularly during a time of war, this insider’s view provides a tenderness that is often overshadowed by artists who are prone only to protestations of military action. While the work may expose the devastating toll that war takes on individuals, it does not dismiss the magnitude of the honorable service provided by those same persons.

A prelude to the recent piece was a site-specific installation Shadid-Lewis created at the National Cemetery at Fort Leavenworth in Kansas. In this work the artist gleaned from her background in music, as well as from her religious heritage. Extended on a Cursed Tree (2006)—the title of the piece—is an excerpt from a hymn. The artist hung various texts, outtakes from hymns that were stamped into dog tags, on the branches of a tree in the cemetery. The text-based work is reminiscent of works by artist Jenny Holzer. Both artists take snippets of longer texts out of their original contexts and require the viewer to rethink their meanings in light of a new context. In the distance of Shadid-Lewis’s piece are the endless rows of white grave markers. They are similar to the rows of white crosses one conjures up when thinking of the National Cemetery in Arlington.

In the video footage of this piece, dog tags sway gently in the breeze as rows of graves assume the role of an audience in the background. Each grave is a symbol of sacrifice. Like Christ, these service men and women were willing to be placed in harm’s way—willing to be sacrificed for the good of countless others. Christ and those represented by the grave markers are the appeasement that purchases the freedom of others.

It is in From Twilight Til Dawn (2009) that Shadid-Lewis is able to show the fullness of her interdisciplinary talents. The installation is one part drawing, one part music, one part documentary, and a whole lot of ephemerality. The work was created while the artist was working on her MFA at the Massachusetts College of Art in Boston. I visited her studio as the piece was in progress. Small portions of the project were in various states of completion about the room, but the room itself was a determining factor in how the piece was eventually resolved. The room was draped in ripstop—the fabric from which parachutes are constructed.

Even at this stage of production a video was a major part of the concept. The artist wondered whether or not projecting onto the fabric was the way to go. I assured her that it was an important consideration. The wispiness of the fabric was an indicator of the ephemeral nature of our existence. The billowing of the fabric, produced at the slightest movement of air currents, was like the pulsating of blood through the body.

At the core of the video is an interview with a WWII era paratrooper. His stories are interspersed with interviews with the artist’s father and vintage footage of hundreds of paratroopers wafting toward the ground. There is a stillness and serenity that comes from observing the earthward journey of the jumpers. But there is also a tension. The viewer recognizes that this is a time of calm before the storm. Once on the ground that serenity will be rudely interrupted.

In the final state this video is projected onto a plastic screen adjoining the ripstop fabric. Again, the peaceful though fragile state of human existence is mimicked through a room draped in parachute fabric. The fragility is enhanced through the blackboard style drawings that are interspersed with the shots of paratroopers and interview footage. The animated stop-action drawings bring to mind the work of William Kentridge. Shadid-Lewis relies on the ephemeral quality of these drawings to bolster the message running throughout the work. A particularly poignant segment comes near the end when the retired paratrooper fades from the screen. After emotionally stating his perennial question, "Why me? Why did I survive instead of others?," he fades from view. The chair where he was sitting comes into focus as a chalk drawing and that drawing is slowly erased to nothing. Though he is an elderly man, the viewer realizes that life is a fleeting thing, no matter how long we live.

The rewind effect that takes place in this segment, and in others near the end of the piece, is highly effective. We rewind scenes from our lives over and over in our minds. They are always with us, yet they are also fleeting moments in a timeline spanning much more than our solitary lives. The time-based nature of the installation, coupled with the presence of the flowing fabric, produces a more physical reaction to the work. Shadid-Lewis is able to utilize the inherent qualities of several media into one overwhelming and powerful message. One message that would be muted without the support of various elements together.
Posted by Musings on Contemporary Art & Artists at 3:36 PM