God in the Gallery: Dan Siedell's Thoughts on the State of Modern Art 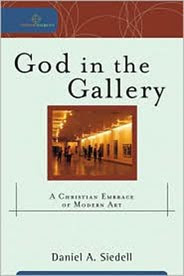 is based on a premise that has been, in his opinion, largely overlooked within the field of art and faith. According to Siedell, the Christian community has tended to offer scholarship on art and faith from primarily two perspectives: theology and philosophy. While these are both valid lenses through which to view modern and contemporary art, the author argues that the rift between traditional Christian faith and the contemporary art world is in large part due to the lack of engagement with the art world by Christians via the established structures of the subculture of the art world (i.e. art criticism).

Siedell grounds the discussion in an evaluation of the enigmatic figure of the “Christian artist.” He suggests that the term, as it is currently understood or misunderstood, arose out of the work of Francis Schaeffer and Hans Rookmaaker in the late ‘60s and early ‘70s. While not diminishing the importance of these men in reengaging evangelicals in the Christian calling to the arts and culture, Siedell argues that the result has been a parallel “Christian art world” that offers an alternative to the presumed destructive Modernism of which Schaeffer and Rookmaaker were so critical. This alternative art world, safe within the embrace of the church, has been nurtured and expanded, in Siedell’s estimation, through institutions such as Christian college and university art departments and organizations like CIVA.

The author suggests that there is indeed an auxiliary route that artists and scholars within the church may pursue than this parallelism. The production of artwork and criticism using the vernacular of the art world, without the caveat that it must serve a specific evangelistic purpose, is one possibility. In terms or criticism, Siedell offers an overview of the two main paths of criticism that have continued since the mid-twentieth century, those of Clement Greenberg and Harold Rosenberg.

Refreshingly, Siedell advocates an art criticism that is nourished by Nicene Christianity. Using this approach the critic may acknowledge the transcendent qualities of works that, while not necessarily created by professing Christians, may function as a window to the eternal, much in the way that a Byzantine icon does. In fact, Siedell draws this very comparison and gives a stirring commentary on just how similar ancient icons are to many forms of contemporary art. Among the numerous examples of this practice is a chapter based on Siedell’s 2005 presentation at the CIVA biennial conference on the artist Enrique Martínez Celaya.

While this is essentially a book on and about art criticism, it is also a book that is somewhat critical of the current state of Christianity in relation to art. Siedell offers more questions than he answers but this is indicative of this period in which a shift is beginning to take place within the so-called “Christian art world.” Whether or not one agrees with his hypotheses, this volume is a welcome and essential addition to the literature on art and faith that has been written since the days of Rookmaaker and Schaeffer.

Daniel Siedell’s God in the Gallery: A Christian Embrace of Modern Arts was published by Baker in 2008. This book review first appeared in the CIVA SEEN journal, volume VIII.2, 2008.
Posted by Musings on Contemporary Art & Artists at 5:59 PM

I'm just finishing-up on this book for a college course and must say that your review is spot-on. As a new christian and an artist, I found this book to be profoundly enlightening. It's a little challenging to read at times, but well worth the effort.

Hi, I am from Australia.

But is Christian art, especially the modern examples thereof, about Real God?

What happens when The Incarnate Divine Person displays His Divine Image in the Gallery?

Please find a set of references on Sacred Art by a unique Divine Artist.

If you happen to be going to New York in September check out the Tagore Gallery.

i enjoyed the book as well - some interesting framing for engaging with art, and i appreciate his engagement with art as objects within a specific context (being the well-train post-modernist that i am) as well as an engagement from a faith position.

you can find my own thoughts on the book at my blog: http://etechne.blogspot.com/2009/11/re-god-in-gallery.html