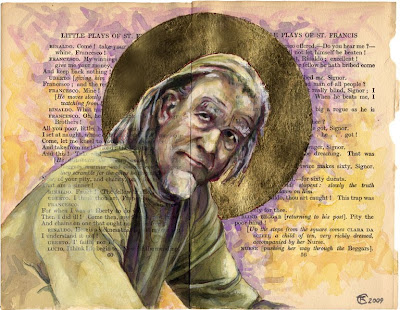 We don’t hear much about saints anymore. Every now and then we hear about someone who is considered a hero. For instance, a common citizen may risk his or her life to save another in harm’s way. Though we are more likely to hear about a figure in the world of sports who is a hero to young children, most of those “role models” do not accurately fill the role of hero. Still, in a world where few figures seem to don the attire of the saintly, we would do well to consider what a saint actually is.


I began investigating the concept of the veneration of saints about a decade ago when I was in the planning stages of my altarpiece constructions of personal saints. Not having been raised in an environment where the idea of canonized saints was ever entertained, I had to do a bit of research. The definition of veneration is: “to look upon with deep, honor, respect, or reverence.” As I looked at the lives of the traditional saints I began to understand that these were folks who were equally flawed as the rest of us. They were not some race of superheroes. The canonized saints were simply people who had aspects of their lives that were considered holy or “Christ-like.” Those are the attributes that we should be considering and striving to emulate in our own lives.

I have concurrently worked on some portraits of “non-canonized saints,” painted with watercolor on book pages, and with gold leaf halos. This started as a different avenue to consider some of these “personal saints” but began to evolve, as art is prone to do. I wanted to branch out into some new directions with the series. However, some of the people I began to consider were going to be a stretch for many. They seemed much less saintly, sometimes even to me. That is when the idea of Saints, Sinners, Martyrs, & Misfits came to me. 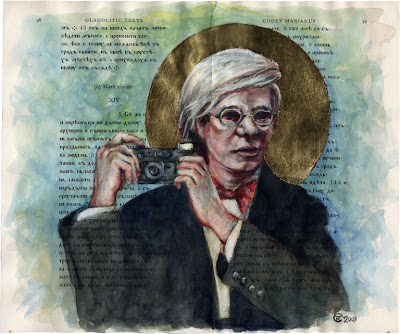 Some of the figures are people that I have recognized many Protestants unknowingly venerating. Take C.S. Lewis and Francis Schaeffer, for instance. Evangelical Christians hold the same kind of reverence for these two figures that many a Roman Catholic or Orthodox Christian would for the canonized saints of the past. And that isn’t a bad thing, but let’s call a spade a spade, here. We all have people in our lives that we look up to—people we wish we were more like. I don’t mean those people who are wealthy and seem to lead “the good life,” but those whose character is something that truly impresses and inspires us.

So when I start featuring figures like Andy Warhol, the plot thickens. Much has been written about the place of religion and faith in the life of Andy Warhol. The big picture of his biography does not suggest that he was the most saintly man, in the traditional sense. Still, there is something intriguing about his regular attendance at church services. There is also something endearing about the way he seemed to be a father to the rejected and dejected individuals who made their way to his Factory. In a certain way, he was a bright spot in the art world for several decades.

Without spoiling the surprises of future subjects for this series, I need to offer some comments on the Sinners and Misfits portion of the title. The individuals all fit that description to a certain degree. None of them were or are perfect. None of them were fully comfortable in this world. This is all part of the scheme. None of us feels like we really fit into this world, and we all know the mistakes we make, the wrongs and hurts we inflict on others. The Sinners and Misfits are equally the Saints and Martyrs, and vice versa. These people bring us all hope. The hope based in the fact that we are not in this life alone. There are others who live in some ways better than us, but in other ways worse than us. We muddle through together, and sometimes we are the saint to someone else.
Posted by Musings on Contemporary Art & Artists at 11:27 AM