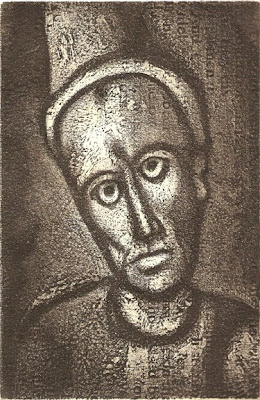 A hallmark of postmodern art is the vigorous borrowing or appropriating of images. This can just as often be images from art history as images from pop culture and mass media. While I do often use other photographic sources as a partial basis for elements in my work, I rarely make reference to or borrow obviously from non-photographic resources (i.e. another person’s artwork).

In 2006 I made an exception to this practice when I created a couple etchings in homage to Georges Rouault. My work is normally quite different from the style one associates with Rouault, one of the most noted Expressionists of the twentieth century. The occasion for the creation of these etchings was the exhibition This Anguished World of Shadows at the Museum of Biblical Art (MOBIA) in New York City. The foundation of this exhibit was the fifty-eight intaglio prints that comprise one of Rouault’s crowning achievements—Le Miserere et Guerre. The creation of this series of etchings was complicated from the start and there are plenty of authors who have detailed that tale. The technique the artist used has been foundational to my process and that is what I wish to explain here.

Rouault began the series by creating ink drawings for each of the images. A photographic process, probably photogravure, was used to produce the initial images on the copper plates. Rouault was completely unsatisfied with the results and proceeded to work back into each of the images by hand, using more traditional etching and intaglio processes. The photo-based images possibly looked like black and white photographic reproductions found in books and newspapers—when you look closely you find that they are composed of dots.

I owe a large debt to Rouault’s ingenuity. Nearly all of my etchings go through a similar process. I begin with a drawing that is either scanned into Photoshop or produced with that software. The values are then inverted (black becomes white and white becomes black) and the image is printed onto a transparency using a laser printer. When I place that image face down on a copper plate and slowly heat it, while rubbing the non-toner side of the transparency with a wooden spoon, the toner offsets to the copper. It is a little more complex than that, but that is the general idea. The toner acts as a resist when the plate is placed in a bath of acid. When inked, the etched plate will print nearly the same as the original drawing—in theory. The image transfer usually has some flaws and the print will have that same dot pattern that likely annoyed Rouault. Therefore, I go back into the plate using the same traditional techniques that he used nearly a century ago.

Because the owners of the particular set of Miserere prints that were in the MOBIA show are friends of mine, I had the privilege of inspecting and studying each and every print by hand before they were framed. On some prints the texture from the photogravure was still evident in certain areas. In others, the technique was so diffuse that, aside from the plate mark, the image could be mistaken for a charcoal drawing.

The image reproduced here is based on plate 8 of the Miserere—Qui ne se grime pas? (Who does not wear a mask?) It is significantly smaller in size and, like much of my work, is actually formed from text. The text is segments of the Passion of Jesus, scanned into Photoshop from portions of the Gospels. Layers of that text were placed over an image of Rouault’s print and the lighter values of the etching was then "erased" from the text layers in Photoshop. Eventually, enough text layers were produced that when Rouault’s image was removed the text essentially formed a facsimile image. This is what was transferred to the copper plate.

This image went through about a dozen states before it finally looked like it does now. The text needed to be made darker and lighter in various areas. I would add traditional etching and aquatint to darken portions. The next proof might reveal that some areas were too dark and then I had to scrape away some of the surface of the copper. It is actually a fairly physical, almost sculptural process. I probably enjoy printmaking so much because it possesses this quality of physically making something.
Posted by Musings on Contemporary Art & Artists at 1:41 PM