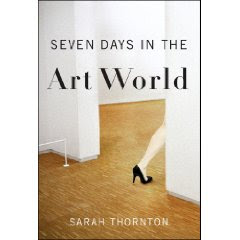 A new book was recently released that attempts to offer a glimpse into the nebulous realm of the contemporary art world. Those who are not part of the inside conversation of the cultural elite tend to give this segment of society little attention. It isn’t difficult to understand why since contemporary forms and mediums are often non-traditional, at best, and the language used to describe and analyze them is coded and dense.

However, Sarah Thornton has made a noble attempt at demystifying art, artists, and the system that envelopes them with her book Seven Days in the Art World

. The chapters are broken down into some of the main organizational categories that comprise the engine of this sub-culture. Topics include Museums, Galleries, Biennials, Art Fairs, and Critiques. These are the specific places and means by which the art world hums along.

I found the style to be engaging. Thornton draws us into the locations and people, even if the subject is quite new. Yet the book would require a little extra effort for those totally oblivious to the names and places that hold a particular sway over contemporary art and artists. This was noticeable in the chapter on the Venice Biennale. For those who rarely engage high culture, Thornton does describe what a biennial is—simply an exhibition, usually international, that happens at a specific institution or location every two years. She even reveals that Venice is the granddaddy of all biennial exhibitions. However, some of the names and activities could lose the uninitiated reader almost as easily as the labyrinthine streets of the canalled city. More importantly, though, is the maddening pace and sheer offering of exhibition venues that overwhelm a Biennale viewer. Thornton is fully able to convey the exhausting tempo of the Venice Biennale in this chapter.

My favorite chapter is on the group critique, or "crit," as the art school and MFA crowd call it. Thornton chose CalArts as the place to experience a crit in its fullness. While the coastal extremes of LA and New York continually vie for importance, the LA scene does tend to favor the conceptual, theory-based artist. Thornton spends an entire day—going well past midnight—with the art school students in their group critique.

The personalities of the student-artists come forth. The group of bohemians at times argues polar opposite views based in social, class, gender, and ethnic theories. The entire spectacle is seen as a performance-based work in its own right by Thornton. Everyone is striving to find his or her own artistic identity through the process of the critique. The class has its high and low points. The language becomes quite oblique at times and Thornton later has to ask students for definitions for some of the artspeak terminology thrown about.

This portrayal of a crit is spot on. Better yet is Thornton’s analysis of the MFA system and its successes and failures. Her description of how the art student comes to the MFA program confident in his or her abilities and artistic vision, only to be torn down to the smallest, most essential beliefs that can then be built upon, is exceptional. For over a decade I have attempted to describe this very process to former students and friends as they have entered MFA programs. No one seems to understand it fully until they experience it first hand. For this chapter alone, I would be willing to use this as a text for an undergraduate studio art course.

is a great starting point for anyone interested in contemporary art. Those initiated into the fold will see themselves and others they know within the pages. Those at the periphery will be welcomed farther into the circle.
Posted by Musings on Contemporary Art & Artists at 4:12 PM