As Plain as Black and White: The Art of Kara Walker and William Kentridge 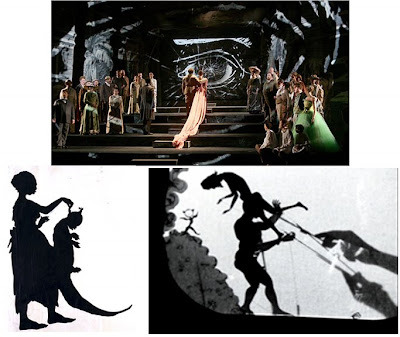 Regrettably, the United States and South Africa share a tainted history of repression of the black citizens in their midsts. Even though the Civil Rights movement of the 1960s and the emancipation of enslaved African Americans in the mid-nineteenth century predated the fall of Apartheid, Americans have little to hold over the heads of our South African brothers and sisters. The far reaching effects of generations of mistreatment and inequality cannot be wiped perfectly clean. Even a chalk board leaves residual traces of its previous content.

Coinciding with the political struggles for equality in the tumultuous decade of the ‘60s was the burgeoning business of identity theories within the art world. The art of the twentieth century had dismantled the traditional media, modes, and subject matter of art making of the previous centuries. When there was no longer a common, shared narrative artists were forced to seek other avenues for inspiration. Many of them looked inward and found their subject matter in such topics as feminism, sexual orientation, Marxism (or other political theories), and ethnic identity.

While this change of events has had the unfortunate effect of giving us far too many details about what goes on in the bedrooms of some artists, there are also some positive outcomes. Underrepresented artists, such as women and persons of color, have gained a voice that they did not previously possess. This has provided a much needed spotlight on issues and concerns that were virtually absent within the general discourse.

William Kentridge is an heir to this form of political and ethnic art. His is not a direct descendant, however. Kentridge is a South African of white European descent. His work, while often narrative, is not overly didactic. It often contains metaphors and references to the troubled past (and present) of South Africa and the relations among its inhabitants.

His medium of choice is charcoal on paper. And while the graphic contrast of black and white is not accidental, this is also not simply drawing. More often than not Kentridge’s drawings are given an animated life through the media of film and video. He repeatedly draws, erases, and then draws again on single sheets of paper; photographically recording each new, altered image. As the scene changes with each new drawing, the version played back is more than a typical animation. The animation retains the history of its creation. Like the chalk board, it leaves a residue and reminder of what came before.

This residue in black and white befits the continuing challenges that face South Africa. A nation can make claims of equality and enact laws that prohibit oppression but that does not blot out the reality of history. That is a good thing. The sticky quality of our collective history can be our conscience when we would rather ignore our past offenses and biases.

It is little surprise that Kentridge fell into this particular niche of politically tempered theatricality within his art. In college, in Johannesburg, he studied Politics and African Studies, as well as Fine Art. By the 1980s he had moved to Paris to study mime and theatre. For nearly two decades he worked in theatre and television—behind the scenes.

It seemed almost inevitable that Kentridge would take up the challenge, in 2005, of set design and production for Mozart’s opera The Magic Flute. The essence of opera is over-the-top theatricality. The artist embraced the baroque elements of the medium as he combined the frenetic qualities of his typical style with live action and sound. His drawings, as well as text, flashed behind and sometimes on the performers. The remaining, more stable, parts of the set were also rendered in his trademark expressionist style. Essentially, everything was executed in black, white, and gray. The gray implies that the unending struggle of black and white is seldom "black and white"—life is far more gray.

William Kentridge’s American counterpart, in some respects, can be found in Kara Walker. While Kentridge continually chips away at the sins of society, Walker manages to offend nearly every possible faction with her explicit art works. Heralded and derided from the time her work first caught the attention of critics upon her graduation from the MFA program at the Rhode Island School of Design, Kara Walker utilizes stereotypes to push the envelope with topics of both gender and race. The immediate and forceful quality of her work brought her to the attention of the MacArthur Foundation, from which she received the coveted Genius Grant—one of the youngest recipients ever.

It is also not an accident that, like Kentridge, Walker limits nearly all of her output to black and white. The medium with which she is most associated is cut-paper silhouettes. Sometimes the black image is painted directly on a white wall, but most are mural size works that she first draws on sheets of black paper then meticulously cuts out with an X-Acto knife, finally adhering to the wall with wax. Though the process and materials are simple, the imagery is complex and almost always offensive. That is where the controversy exists.

Walker’s imagery is derived from the antebellum south. Since all we see is the silhouette there are certain gaps and ambiguities that arise between figures. Figures blend together into complex forms in which appendages are difficult to ascribe to a specific individual. Men and women, adults and children, blacks and whites morph into one another, along with various elements of flora and fauna. The results are fantastic and sometimes repulsive.

Walker easily presents the offenses of white slave owners against their black slaves. This may be physical abuses, but the sexual abuses are equally represented. They can be in the form of adults on children, men on women, and even men on men. No one is really left out of the mix. This is exactly why Kara Walker has received such intense criticism. For her, it seems that nothing is sacred or off limits.

Because the imagery is often the result of mixtures of stereotypical and politically incorrect illustrations from the period, even Walker’s African American viewers have taken exception to her work. In particular, artist Betye Saar, who had herself questioned stereotypical representations of African Americans through her work in the 1960s, proposed a letter writing campaign against the exhibition of Walker’s work. She found Kara’s work to be an odd reinforcement of the stereotypes her forebears had worked so hard to eradicate. Yet Walker has been given major exhibition after major exhibition.

There is no denying that Walker’s work is offensive, but she is an equal opportunity offender. This is part of the power of her work. She makes everyone complicit in the atrocities depicted. Everyone plays a role. And though the imagery is black and white, delineating cause and effect is about as tricky as it is in real life.

The choice of cut-paper silhouettes is important not only because of the black and white elements but for the social connotations associated with the medium. It is a lowly craft form, not on par with arts such as painting. It could, thus, be taken up by eighteenth and nineteenth century African Americans—those in a lower station of society. Walker also took it on as a medium because it was a more democratic form that required no special training and was often associated with the lower standing of women in the culture.

Though her images are static on the wall, they share a theatrical bent that is crucial to William Kentridge’s work, as well. Similarly, Walker has begun to utilize video within her art production. Though the work is very different from Kentridge’s stop-action animation, it is analogous in the way it incorporates the elements of Walker’s primary medium. The videos are akin to Balinese shadow puppetry. Walker creates silhouette puppets that she manipulates behind a backlit cloth scrim. The work is put into motion and takes on a new dimension that can never be achieved through the motionless forms on the wall. Kentridge, himself, had worked with puppetry decades before.

In both Walker’s and Kentridge’s work the theatrical becomes a key to understanding the message. The use of black and white imagery has much more to do with conflicts between ethnic groups than clarity of meaning. The theatrical element shows the viewer that the concept is so significant that an almost melodramatic turn must be taken to lift us out of everyday existence. Something extraordinary—which mimics life but is apart from it—is needed to call our attention to the matters at hand.

What both artists are able to achieve in their various works is a component that lies at the core of what art is in contemporary times. Even though each artist is adept at creating representational imagery, that is far from the final goal of their works. Transcendence is the key. The work transcends mere representation and fills viewers with questions instead of answers. Since it is somewhat politically based, the work is forcing viewers to examine and acknowledge their role in the interchanges of society. This transcendent quality will lead in various directions depending on the art and the artist , but the best of contemporary art will take viewers outside of itself and outside of themselves. It is only when we view ourselves from another vantage point that we are able to critique our attitudes and behaviors.
Posted by Musings on Contemporary Art & Artists at 1:37 PM