Word and Image as Symbol 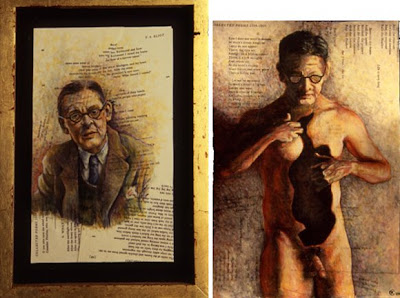 I like to think that I am pretty open to the shifting face of art. The past hundred years have seen some major modifications in the materials and modes of art making. Many people are still just trying to come to terms with the forms of abstraction that Picasso introduced through Cubism, though art’s evolution has progressed far from that transition. While my own work tends to retain enough elements of representation to appease a more general audience, I believe that it also connects with even the most contemporary concepts.

To the casual observer, the process of painting on text, or more specifically book pages, is little more than a novel twist on traditional painting. The text, however, is not simply a foil to work against—not just an additional texture or value. In these paintings the image and the text are both readable, yet each is partially obscured by the other. This balance between the readable/recognizable and the indecipherable is not simply some postmodern ploy undertaken to confuse the viewer and skirt around a specific concept or theme within each particular piece. It is, rather, based in theories of deconstructionist philosophy an semiotics.

Semiotics is the theory and study of signs and symbols, especially as elements of language or other systems of communication, and includes the study of how meaning is constructed and understood. Our contemporary written languages evolved from earlier forms that were more pictorial. Letters were nearer to Egyptian hieroglyphics. As time progressed these pictographs were abstracted into symbols that increasingly looked less like objects from the natural world. Eventually, as words composed of various letters strung together to denote specific sounds became the norm, the symbols had less association with original objects. Words not only symbolized objects but actions, complex thoughts, and ideas.

Connecting this to the deconstructionist views of Jacques Derrida and other philosophers of the later twentieth century is the idea that these symbols (words) for ideas and objects are not quite as clear as we typically assume them to be. Your understanding of something as simple as a chair, brought to your mind when you see the word "chair" in this sentence, is very likely different from the specific model and style of a chair that I am conceiving as I write the sentence. While we both have a general agreement on the basics of a chair it is nearly impossible for the author to clearly convey the most specific message to his or her audience. Even when using very descriptive terms, such as a plush green recliner, there are too many variables to allow the full intentions of the author to be completely and accurately relayed to a reader. [For the prime visual example of this look to Joseph Kosuth’s conceptualist work entitled One and Three Chairs.]

Symbols seems to be the best we can do when it comes to communication. They help us get by but they can also be a hindrance to our fully understanding one another. Language and words are only the most common of these symbols. Even pictorial symbols like those used to prevent us from, say, slipping on a wet, freshly mopped floor, take on cultural qualifications that cause them to be almost indecipherable to persons outside of their culture of origin. With that in mind, it stands to reason that the pictorial or other symbolic elements evident in visual art are misconstrued as much as verbal or written language.

Communication, however, is not a lost cause. You probably are able to comprehend the major elements of my message through this writing. Still, it is these inherent misperceptions and partial communications that have been embraced by artists working in a postmodern context over the last four to five decades. What does are mean and how does it function if the intention and message of the author cannot fully be comprehended? And is art even fulfilling its primary function if it takes a whole cadre of writers to describe the layers of association that comprise its totality?

I am not a philosopher so I do not intend to answer all these questions and others like them. I do, through my methods, acknowledge and embrace the limitations and nature of communication. I even use them to my advantage when I can. Art. like written communication, may have one intended audience. The artist or author is never fully able to limit reception to that intended audience. Knowing and accepting this limitation expands the possibilities of meaning.

The narrative presented, both in words and images, within my paintings are painstakingly chosen. Sometimes the juxtaposition of text and images will further illuminate a concept. At other times the two are merely complementary. Whatever the case, the combination of the words and images is able to heighten the understanding of the intended meaning. This is possible, but not always likely. The images obscure the words and the scenes are often so esoteric that they do little to expand the knowledge of the viewer. While some would claim that I am intentionally playing a game with the viewer, the objective is to elicit more engagement with the work and interaction with the viewer.

In a way, my paintings are pedagogical. I create and present them in such a way as to instruct the viewer in how he or she should approach all contemporary art. The work is layered and interactive. That means that the viewer must not only approach, but reapproach the work. Each work is something that reveals itself over time and a viewer is not intended to "get" or comprehend the work in its totality in one five minute perusal—and five minutes is overly generous considering that most viewers give less than a minute to any artwork. If a viewer truly wants to appreciate and receive the messages of an artwork as intended by the artist then he or she needs to do a little homework. It is no different from contemporary literature that often references tales from our cultural history.

That may seem like a lot of effort for many viewers. All I can say is that this is the state of contemporary art. It takes an equal part of energy on the part of the viewer as on the artist. However, the rewards of unwrapping the layers that make up the artwork is that much greater. Anything worthwhile takes some effort. So I guess the intended audience for my work may be those who are willing to take on that responsibility. And I hope you are one of those people.
Posted by Musings on Contemporary Art & Artists at 1:15 PM