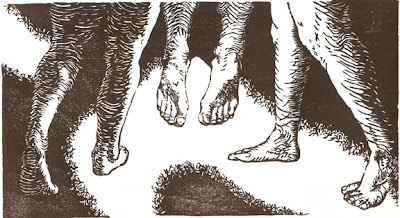 This is one of the most recent woodcut projects currently under production in my studio. I have not yet titled it. I usually wait until the edition has been printed before I do that. This was a test print (also known as a state proof) of the first of two blocks. I thought I had finished carving this, but if you look between the two central feet you will find that the filigree texture had not yet been carved out. It will be soon.
This is yet another woodcut featuring feet. Feet were not a preconceived motif for this series, but they did show up often as the pieces progressed. I have been working on the series on and off for about seven years. I am revising two earlier prints and have this one and four others to cut and print before the series is finally complete. People often ask what the "hairy or furry" areas are. The plain and simple truth is that they are design shapes that add texture and movement to the compositions. I arrived at them organically and they then started to weave their way into my style. They don’t "represent" anything in particular, nor do they have any hidden meaning.
Speaking of style… I’ve had several people tell me that the woodcuts remind them of work by Albrecht Durer. I can understand where they are coming from, but I would never put myself on that level. The reality is that I certainly look to Durer’s work for inspiration and design elements. He is, obviously, one the greatest masters of the woodcut print. There are also only so many ways that the medium can be used to create representational figurative images. So, there will inevitably be some similarities.
My woodcuts are easily recognizable as a particular style, but I am currently considering what will follow this series once it is complete. The importance of combining text and imagery has me questioning how concept will eventually impact technique in the woodcuts. My 2007 Christmas card print was the only relief print to date that combined image and text. It still looked like my typical style but with text lightly spread through the background. It would be nice to more fully integrate word and image, like I am doing with the current etching/intaglio series, but I may need to forfeit some of the recognizability of my current style. This ends up being a fairly common concern among professional artists. Do you keep churning out the work that people really connect with (and are more apt to buy) or do you take risks into some uncharted territory? Stay tuned to find out how I resolve that.
Posted by Musings on Contemporary Art & Artists at 10:44 AM