“And why are those people naked…?” 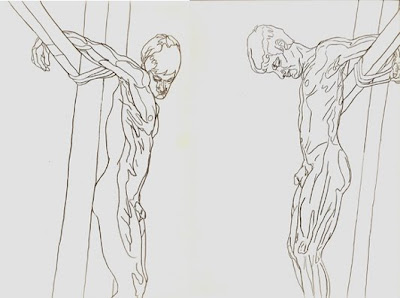 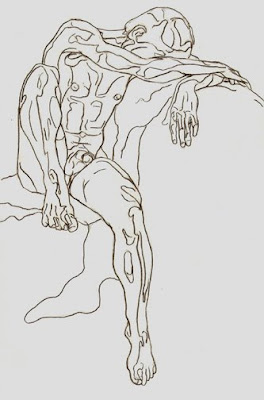 There is one question that invariably arises when people view my artwork. “Just why are all the people naked?” Nude is the correct term, but that is not something to quibble over for the time being. There are several answers to the question and I will address each of them in turn, but I need to lay out a bit of my background before I do that.

The vocation of artist was not something that one would have foreseen in my future early on. I grew up in a small village—not even large enough to be designated a town—in Michigan. It is quite rural and many of my friends and classmates actually lived on farms. A large percentage of my family were and are teachers. And while most in my family are musically inclined, any artistic leanings never led toward any formal training or professions within the creative sector.

Academically, I was a fairly exceptional student which provided many options for a career path. It was not until I entered high school that it became obvious to me that what I truly enjoyed most was creating artwork. At that time, like many artistically talented kids, my main goal was producing realistic drawings and paintings, often of animals and wildlife. What can I say? I grew up pretty close to the earth and my family and friends certainly appreciated that style. Much to my dismay, several of those old paintings still adorn the homes of my family members.

Once I began my formal art education in college the trajectory of my work soon took shape. I had an equal interest in art history and was drawn to figurative painters, in particular. I honestly didn’t start out planning to produce mostly nude figures, but in order to understand the human body, even clothed, one needs to know its structure without clothing. When I began to produce work with nude figures, even from the first, it made me somewhat of a maverick. Since I come from a very conservative evangelical/fundamentalist protestant background, and the undergraduate institutions I attended share a similar heritage, the work wasn’t deemed as the most appropriate. It continued to cause problems in those settings as time went on.

Fast forwarding to the work of the past decade, I am able to explain the use of the nude in more depth. On the most basic level I am following in the long tradition of figurative artists going back to the Greeks. Modern and contemporary artists who have had a profound impact on me are Leonard Baskin, Lucian Freud, Kathe Kollwitz, and Odd Nerdrum. Surveying the work of these artists one can easily see that I am often drawn to more psychological and sublime portrayals of the human form. The figure is an equal element with color, value, shape, and line inside the composition.

The next, more generalized reason for employing the nude figure, is connected to my use of text along with imagery in my work. I am exploring an incarnational view in which the person of Jesus is at once the Word of God, but also the physical manifestation of God on earth. The Word and Image of God, equally. As my friend Ed Knippers often states, if Jesus truly came in full, physical, human form, as a Jewish man, then he came anatomically correct. This doesn’t mean that I am glorifying his sexuality, but neglecting or subverting it is equally dangerous. It amounts to a modern day Gnosticism. This is actually one of the most shocking premises of Christianity and it continues to be a difficult element of the faith.

Conservative American Christianity is often more than uncomfortable with the body and sexuality. Again, this leads to a renewed Gnosticism. While there is plenty of pronouncement against adultery, fornication, and homosexuality, there has been far too little time given to discussing human sexuality in the most basic sense. The fear that talking about sexuality openly and frankly, because it might be an encouragement to young people to experiment sexually, has led to neglecting to talk about it much at all. That lack of discussion has probably, inadvertently, led to more than one teenage pregnancy. What I am getting at by using these nude figures is confronting this basic fact of human sexuality as part of the fullness of our humanity.

The final, specific use of the nude in my work is related to the nude figures portrayed in the altarpieces. In this instance the nudity is used as a leveling agent. Again, my protestant background comes into play here. These “personal saints” are every day, common people, not necessarily those canonized by the Holy Roman Church. I have chosen to portray them as saints, venerating them for living exemplary lives in one way or another. They are ordinary people placed on a pedestal for others to consider. Saints are living all around us. As I elevate them I also bring them back down to the level of each of us. They are equally as human as you and me.

I know that producing work with nude figures is ensuring that some people will find it not to be child-friendly, or even cause them to label it as obscene. It also limits those who will be willing to purchase it. That is the risk that I take. I find that being true to what the work is calling me to do is ultimately more important. If the work is not honest in that sense it will eventually be evident to the viewer.
Posted by Musings on Contemporary Art & Artists at 8:50 PM

I enjoyed this article. Can't say I'll read each in depth but this one I did. I miss hanging out and speaking of music in those North Shore coffee houses (however infrequent it was).

I really appreciated this article Tyrus! When Christians avoid the discussions dealing with corporeality, whether sexuality, nudity...whatever, the secular is able to dominate the conversation. This results in the contemporary destortions of thought regarding physical expectation, personal identity, etc. Much of my current work I can't show my Christian friends and family because they consider it "a waste", "shameful", "just wrong" based on imagery not bothering to get to the idea behind the work. In my opinion, anything that confronts contemporary ideals is responsible use and something that ought to be done.
Thanks Tyrus!