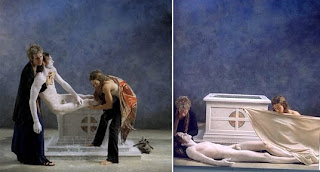 When an artist chooses to produce work in a medium that is not a more traditional material the general viewer can find the work somewhat suspect. This may be more pronounced when it comes to video as an art form. Video, by no means, is new. Artists have been using it for over forty years, in one form or another. In the 1960s and 70s much of the video work produced had documentation as its basis, though there were some truly experimental pioneers such as Nam June Paik. Today, with the proliferation of miniDV recorders, video phones, and iMovie software anyone with access can create video works. Much of what the novice produces in this medium still has documentation at its core, and video remains a democratic medium. It is for everyone.

The fate of video is related to its older sibling, photography. Both have had some difficulty gaining acceptance as full fledged art media. The popularity and accessibility of each with the masses is at the heart of this. Once Kodak made film cameras inexpensive enough for the average middle class citizen there was a certain cheapening of the medium. Everyone could fancy himself or herself a Photographer. However, the snapshots for which most of us are responsible are simply not the same thing as a photograph produced by a fine artist. The medium is the same but the skill, intent, and process are worlds apart. It used to be that an artist spent an exceptional amount of time in the darkroom, assuring that the final photographic print was tweaked in just the right ways. Now that time is often spent in Photoshop. Either way, there is much more to these images than what results when most of us snap a cell phone image while on vacation at the beach.

Returning to video, the analogy can be made with YouTube. There are many humorous and interesting videos floating around cyberspace. The vast majority can scarcely be considered art and the creation of these does not prove their maker to be an artist or a great cinematographer. Yet there does remain some video that is, and should be, considered high art.

My observation, time and again, relating to the general public’s attitude toward video as art, has less to do with the medium than a broader attitude toward art. When video art is displayed in gallery and museum settings a common scenario is repeated day after day. Viewers approach the screen or wall where the video is displayed, look at what is transpiring for maybe ten seconds, get bored and move on. This isn’t unique to video. It happens with traditional paintings and sculpture as well.

The best of video art, however, has something unique to offer those who wish to view art. Time. Without the time element a video is just a still image—a photograph. There, of course, can be sound, too. That is peripheral to the element of time, though it may certainly be essential to a given work. The misperception with which many approach video is that it should be fast paced and to the point—instantaneously understood. This is exactly what a consumerist culture has prepared us to accept and expect. We view more traditional art forms in this same fashion because our lives move at fiber optic speed.

A contemporary master of video—and the element of time in particular—is Bill Viola. His ideas and themes are ancient though his choice of medium is fairly modern. Blending elements of Christianity, Buddhism, Sufism and other eastern philosophies, Viola explores the questions that have plagued us since the birth of humanity. These ideas are so pertinent that he demands our attention—our time—through his medium of choice.

There is a particularly excellent example of Viola’s work in the Yale University Art Gallery. When I came upon Study for Emergence in the museum galleries it was just over half-way through its 10 minute playing cycle. I expect that this may be another reason why viewers abandon video pieces so quickly. When you start mid-way through you miss important information. Patience is essential. This is a fairly long piece. It moves achingly slow. Two women are perched upon low steps. At the top of the steps is a large stone box. Not far into the piece each woman proceeds to move through an anguished and dramatic act of grieving. Because the scene is significantly slowed down we observe their pain in a more heightened and intense way.

The women interact in a cursory manner. They are never fully consoling one another. Their grief seems common, but not actually shared—it is deeply personal. Ever so slowly, water begins to cascade down the sides of the stone box. It flows down the steps, interrupting the women in their sorrow. Again, very slowly, the women begin to move up the steps to what is now being revealed as a sepulcher. From within the water filled tomb rises a pale and limp figure of a man. The women muster enough strength to lift the body from its chamber and rest it upon the steps on which they first began the sequence.


The imagery would be poignant even at normal speed but the belabored slowness of the work acts as a magnifying glass on their emotions. I viewed the work about two and half times. This is asking a lot of the viewer. Without that kind of commitment, however, the nuances are not revealed. Not only is the artist asking much from the viewer, he is asking a lot of the art. That is what is actually expected from art, that it is transcendent, able to take us above and beyond the banalities of every day existence.

It is a tall order to ask viewers to invest this kind of time on an individual work of art. With the current trend of crowded blockbuster museum exhibitions it isn’t really even feasible in many instances. Still, the challenge to the viewer is relevant. Art is one of the exceptions for most people. We approach it passively, expecting it to tell its story and reveal its meaning immediately. When reading literature we expect to work a little at it. There are truths to be revealed but we have to dig a little to find them. Even those who enjoy watching sporting events understand that in order to fully appreciate them they need to understand the rules of the game. In short, we have to do our homework.

Contemporary art is not self evident. It does not become any clearer by avoiding it. The challenge is to take the time to look past normal expectations and preconceptions. Viewers need to be in dialogue with the work. That, like all things worth doing in this life, takes an investment of time.
Posted by Musings on Contemporary Art & Artists at 8:56 PM