The Innocent Eye of James Castle 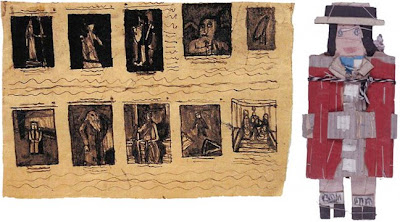 Many of the great modernists, particularly those who had connections to surrealism, were proponents of artwork created by children, the untrained, and the insane. There was a naivete associated with this work that some modernists were striving for in their own. The idea behind this was that these works were able to communicate the most primitive and primary elements of human experience in the most broadly understandable way. Children, or the insane, have no intellectual baggage of art history and world culture that comprised the bedrock of art making over the centuries.

There is probably something to this, though the concept can lead to comments such as, "My three-year-old could do that." The problem is that we cannot unlearn what we, as artists, know of art history. And though Jackson Pollock’s drip paintings may seem like something a child could produce, they most assuredly are not. The skill of making something look effortless is on par with making something look "realistic." The latter, after all, was one of the chief goals of artists until the most recent decades and is still one of the elements that many in a general audience prefer. A good example of someone who could achieve both is John Singer Sargent. Up close the brush strokes look haphazard and fully abstract, yet from a distance they form astonishing portrait likenesses. The look is fresh, not belabored, but was no simple task.

It is rare to find an artist so detached from the past and the present who is still able to communicate to the common viewer and attract the interest of the art world elite. The prime example of an artist who achieved this is someone whose life shows why this is an anomaly. While I was living in Idaho in the late 1990s I came upon the work of James Castle. He was already deceased but his work has only started to gain national attention in the last decade. I was able to view Castle’s work at his primary dealer’s gallery—the J. Crist Gallery in Boise—and at the Boise Art Museum.

What makes Castle’s work special? For one, he lived in remote Garden Valley, Idaho for most of his life. Added to this was the fact that he was both deaf and mute. Once one sees his choice of media the equation is further complicated.
James Castle’s parents owned the general store/post office in Garden Valley. It is from here that James literally "found" most of his art making materials. Cast off or unclaimed cardboard, envelopes, paper, catalogs and magazines were the foundation of much of his work. This would not seem shocking in the era of Cubist collages, but the work of some avant garde artists in Paris was more than a world away from a deaf-mute boy in rural Idaho. Now, it was not for lack of encouragement from James’ family that he employed these materials. His parents bought him every imaginable "normal" art material. He just refused to use them.

If you are not already impressed by Castle’s ingenuity wait for the last ball to drop. The ink that he used to draw imagery on his found papers was made from soot and his own saliva, applied with wooden sticks that he sharpened himself. Some of his drawings may seem crude, but when you consider all this the images take on a new significance. Personally, I would find the works important on a level of pure human achievement, not artistic merit, if it was not for their more transcendent qualities.

Art was Castle’s communication with the wide world outside of himself. I think it is appealing to contemporary connoisseurs because it retains many of the qualities of the best postmodern and contemporary art. Some elements are easily recognizable and understandable, while others are beyond our comprehension. The work communicates on certain levels, but is often open to several interpretations. Castle shares our world, but not fully.

I have often been drawn to two specific types of Castle’s work. Some of the drawings mimic the format of high school yearbooks. Small portraits are placed in a grid pattern on the paper, while scribbled lines that stand in for text rest below each image. There are even examples that have been sewn together like books. Though Castle could not read or write (aside from his own name) he clearly understood the significance of the written word. We can only assume that this was ingrained in him even more by observing all the printed matter and letters that passed through the post office.

In 2006 I had the privilege of viewing some of Castle’s work at the Knoedler and Co. Gallery on the upper east of New York City. This work, mostly with elements of letters or text in it, was paired with some late Polaroid photographs by Walker Evans (the exhibition was titled: James Castle and Walker Evans:Wordplay, Signs, and Symbols). It was a compelling comparison. Castle’s work certainly held its own next to one of the twentieth century’s most important artists. The manipulation and recontextualization of letter forms displayed a higher level of creativity than I had previously seen in Castle’s compositions.

The other "series" of Castle’s work that impresses many is his constructions. Utilizing the same found materials, James would build objects he observed in his world. Birds, animals, and sometimes people were crafted by folding and coloring (with what means we are still not certain) papers. Crude sewing was often a means of binding the little sculptures together. The ingenuity of all this is uncanny. Because of his limited communication skills one recognizes that Castle’s powers of observation were far above the average individual.

Again, this is a great story of human triumph, but I assert that it is more. These images are complex and multilayered. They are not the elementary scribblings of a child. Castle is what we often refer to as an Outsider Artist. He is outside the elite art world because he was not groomed and trained within its somewhat incestuous and closed system. However, his work is appreciated for having that primal and untrained quality. Much of the work heralded as the best Outsider Art these days fails to impress. The slap dash qualities, inherent in so much of the work, can come off as cliche instead of significant.

James Castle is among a handful of Outsider Artists who compete as equals among the best artists of their time. If one forgets the backstory of Castle the work still holds up. I suggest that in Castle’s case we should be considered the outsiders. We exist outside of his closed system. We are deciphering his messages, his language, that we cannot wholly comprehend. This makes for work that is not static. It compels us to come back again and again.

Castle’s first major museum survey opened in October 2008 at the Philadelphia Museum of Art. The museum also has an exhibit of jewelry fashioned by Alexander Calder (until November 2008) that is well worth seeing.
Posted by Musings on Contemporary Art & Artists at 10:44 AM

I was looking for images of James Castle's work and came upon your blog. Being a blogger myself, I couldn't resist reading your post and I'm very impressed! Thank you for your insights.

Beautifully written, it's one of best explanations of folk/outsider/naive art and how it influences other artists. I especially liked the line about "you can't unlearn... "