Arman: The Sum is Greater than the Parts

The imagery of Pop art was based in the banal—the commonplace items of everyday life. Conversely, the esoteric and existentialist compositions of the Abstract Expressionists did not sit well with the average person. There was little within those swirls and splatters of paint that seemed worthy of the traditional, lofty goals and intentions of fine art. 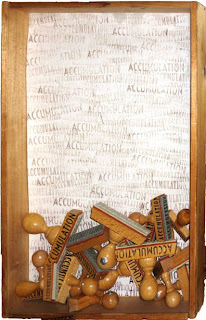 Pop artists in Britain and the U.S. recovered recognizable imagery, but there was something else at work beneath the surface. Pop’s sister movement in France—Nouveau Realisme (New Realism)—was perhaps a better indication of things to come. The performative nature of art making, by Action Painters like Jackson Pollock, had set the stage for Conceptualism. Yet it was the New Realists who proved to be some of the most innovative transitional figures between mid-century abstraction and process oriented conceptual styles of the 1960s and 70s.
The New Realist artist Arman is not known to the masses like Pop’s Andy Warhol. His individual works are not generally recognized outside of the insulated circle of artists, curators, and art historians who compose the art world. His work, however, contains the germ of transition that formed the foundation for much of the significant work of the later twentieth century.
Arman’s work is mainly composed of collections of ordinary objects. They are certainly the next step forward from the Readymades of Marcel Duchamp. However, where Duchamp’s simplicity was found in the single, unadorned object—the urinal or the bottle drying rack—Arman’s simplicity was often located in his singleness of focus. Arman is primarily known for his “accumulations.” This apt title denotes assemblage collections of similar, real life items and objects. 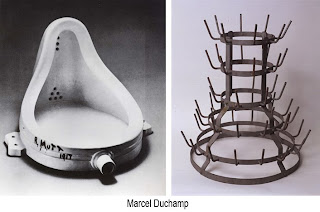 It was not only the Dadaist Readymades of Duchamp that impacted Arman’s aesthetic. Kurt Schwitters, a Dadaist of a different stripe, composed quite formal looking abstract collages out of detritus. These highly structured and meticulously designed works contain intricate patterns and repetitions. Often, similar items are reused within an individual work. Taken out of their original context, they become non-objective visual elements that enhance the overall impact of the work through a “sameness.” It is that very same element that viewers of Arman’s work find most compelling. 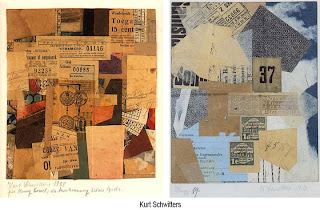 Arman’s art, because of its typical three dimensional nature, can also be aligned with the box constructions of Joseph Cornell. In fact, many of Cornell’s boxes employ repetitions of similar objects, creating an analogous effect. However, Arman should not merely be compared to his predecessors since his relation to his contemporaries is what actually determined his place in art history. 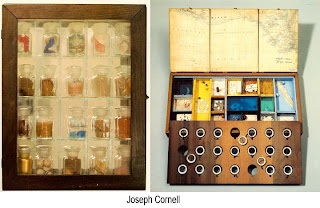 Though both Arman and Yves Klein were both reared in Nice, it was not until they were adults, both studying art, that they became friends and influences on one another. Klein’s work always had a more conceptual and performative aspect, but it originated from a comparable place to Arman’s. Each man studied the martial art of judo (Klein was even bestowed the title of master) and the influence of Asian thinking and philosophies came to bear heavily on many characteristics of their artworks.

Both Arman and Klein typically provided viewers with an art object, yet each often arrived at that object through some form of performative activity. Klein’s Anthropometries may have gained more notoriety (if for no other reason than their blatant exploitation of the female nude) but both artists performed some destructive acts that ultimately resulted in art objects. Some of the Anthropometries even employed flammable actions. Arman also utilized fire to manipulate objects for his works, such as musical instruments.


Arman might smash or burn a cello or violin and then reassemble the remnants as a new art object. This destruction or deconstruction has obvious connections to the theories of both Jacques Derrida and John Cage. Yet, with all the artists who utilized destructive techniques, one should avoid a simple reading that their intentions were set on completely dismantling the concepts of Western art. The influence of Eastern philosophy was often at work and it brings to mind the Hindu god Shiva. The attributes of Shiva include his simultaneous roles as creator and destroyer. There is a direct correlation to this particular subset of Arman’s assemblages. 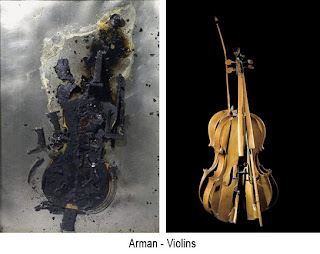 Arman’s work also signals the shifts toward Conceptualism through reconsiderations of established cultural boundaries. John Cage’s blending of art forms—music, visual art, dance, and theater—began to permeate the high art culture of the mid-twentieth century. Robert Rauschenberg and Jim Dine each dabbled in performance art and utilized Duchampian readymade objects in their works, much like Arman. Though mainly recognized as a pioneer in video art, Nam June Paik’s works incorporating violins and cellos are not far afield of Arman’s work with musical instruments. 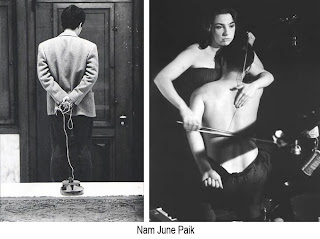 Often Rauschenberg is seen as an essential bridge between Abstract Expressionism and Pop because his Combine Paintings retained the gestural paint application of the former, while the real life assemblage objects denoted the latter. Arman kept one foot planted in the recent art historical past, too. Examples of this are found in the accumulations that incorporate actual paint tubes, often imbedded—as if in suspended animation—in clear plastic. The concept is not reminiscent of Rauschenberg as much as his colleague Jasper Johns. And the streaming paint brings to mind the soak-stain paintings of Morris Louis more than the drip paintings of Pollock. 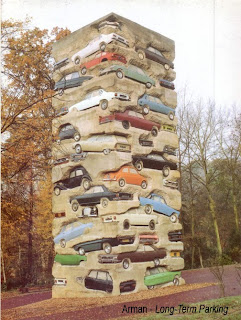 For all the similarities with his contemporaries, Arman remains a distinct figure. His style is unique and recognizable. The accumulations, in particular, possess a presence that one is not always able to articulate. There may be elements of humor, as with 1982’s Long-Term Parking, but at the same time there can be underlying political or sociological messages. The abundance of like items or objects within a limited space focuses the attention of the viewer on intrinsic qualities of those objects. 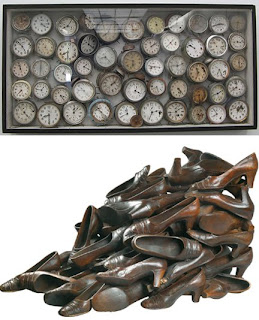 The accumulations recontextualize the materials by stripping away distracting and extraneous elements. The sum of these works is significantly greater than the individual parts. Separated, the objects are often bypassed; combined, the impact of their essential qualities is inevitable.                                                                       The adoption of installation as the preferred medium of so many contemporary artists shows the debt the art world owes Arman. While there are certainly some artists of a new generation who devise compositions through amassing similar objects in an Armanesque style, the collection of disparate objects within a space is more common. Though this may seem to be a distinct differentiation, the recontextualization of non-art objects finds its genesis in Arman as much as in Duchamp. Arman’s accumulations are thus a hallmark of the postmodern desire to deconstruct and then reconstruct meaning from the remnants of Western history and culture.
Posted by Musings on Contemporary Art & Artists at 2:47 PM