It is the universal qualities of art that draw us to it. The ostensible contradiction is that some of the most obscure and highly personal works and themes can allude to this universality. And if the work does not stem from the personal experience of the artist, it will be less likely to deeply connect with viewers. The best work finds a way to subtly bridge the gap.

Robert Gober’s idiosyncratic artistic vocabulary is one of the most unique among artists of the last few decades. His language is not impenetrable, but it tends to be somewhat obscure. Being heavily based in personal experience, it cannot be fully know or completely translated. Yet the overwhelming humanity in the work produces a felt empathy, even when we fail to digest the broader complexities.

The very human characteristics in Gober’s work are often found in the wax body parts that populate his environments. Legs, injected with real hairs, produce an eerie likeness to actual human legs. Placed in corners or protruding from walls, they draw associations with Dorothy’s visit to Oz (minus the ruby slippers) as well as with dismembered corpses.

In Gober’s figures we tend to find only bits and pieces, never complete bodies. Placed in odd diorama-like settings, these produce dream-like dislocations in which the elements of the bodies elicit recollections of persons or experiences, nearer to flashes of suppressed memories. The dismembered figures signal the traumatic. When one considers that most of the work also contends with domestic life, the work is even more unnerving. 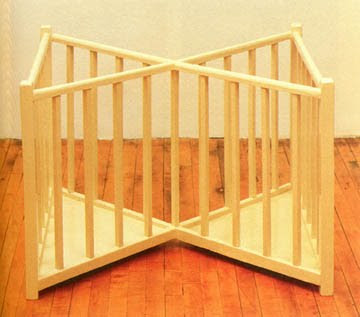 The domestic arena, for Gober, presents a contradiction to our concepts of security. The home is the place when children crave safety and form their understanding of life’s systems from what is lived out before them. The security in Gober’s works is skewed. It can sometimes mutate into a form of containment. Often, we find the adult, the parent, or the guardian presence compromising the safe haven.

Gober’s X Playpen provides an obvious example of this contradiction. A playpen is produced as a structure of safety that inhibits the range of movement of the child, so that he or she does not come to any harm. Gober’s structure of restraint not only inhibits movement, it suggests a prison and an apparatus that might even inflict harm. Still, this is a very physical example of what Gober more often advances through clever psychological means.

The disembodied wax legs touch on various psychological traumas based in the domestic realm. They come in many formats. Sometimes clothed with trouser legs, socks, and shoes, at other times they are bare. The separation of the limbs from the body can be conceived in several ways. The head is almost never present in Gober works. If the family is viewed like a body—a living organism whose parts are dependant on each other—then the absence of the head can be seen as an absence of the authority in the family. The deficiency of direction normally provided by the head leaves the remaining members lost.

The dismemberment may also be read like the psychological phenomenon of splitting or suppressing memories. Multiple personalities are the extreme of this, but we all do this compartmentalizing to some extent. When trauma is present the individual may dissociate the event or black it out. This becomes the security for the wounded or injured psyche. Psychological splits—severings—are the coping mechanism.

On the other side of this dismemberment of the family lies the tragic instigations by the guardian figure. Gober’s reconsideration of traumatic domestic settings reveals a dereliction of duty. The parent figure, the one entrusted to provide security, has abdicated that role. Instead of self-sacrifice on behalf of beloved offspring, the authority figure has chosen self-preservation (consider Gober’s image of a fireplace fueled by a set of child-sized log/legs). It is this dynamic that provides a recurring theme for Gober’s work, though the intricacies and personal provocations manifest themselves in a variety of iconographic forms.

This dismemberment coincides with a concurrent track within Gober’s work—Roman Catholicism. The Catholic faith, like several other belief systems intermingled from his youth, is something the artist has jettisoned from his life. Still, it provides a structure on which he rebuilds. The inconsistencies of the institutional faith are critiqued, yet held in reverence.

A 2005 installation by Gober, at the Matthew Marks Gallery, is a primary example of his strained relationship with Catholicism. The central element of the work is a life-sized, crucified, cement Christ figure. The figure is not only "broken" because of its crucified state; it is beheaded. This brings to mind the beheaded statues from the Protestant Reformation. Like the iconoclasts of the 16th century (and the practitioners of countless ancient religions) Gober has rendered this deity mute and powerless. Like the family analogy above, the Church has been likened to a body, with Christ as the head. Here, the authority of the Church is, at the very least, brought into question. The real presence of the institution’s actual power is gone.

The other startling oddity in the Christ figure is that the nipples are open and act as spouts for a continual flow of water that empties into a hole in the floor. The imagery is as paradoxical as Christ’s statement that he is "living water." This fountain relates to many other Gober works that also utilize water—or even bring water to mind through that element’s absence. Like the sacrament of baptism, the water in a Gober work is connected to a ritual cleansing or purifying.

The difficulty in assessing Gober’s full body of work is figuring out if this is a mute symbol—an ironic nod to the futility of a ritual act of cleansing—or an honest grappling with the form. Of course, it may be both. In the myriad sink sculptures (fabricated from enameled plaster with hand-crafted, cast pewter or bronze faucets and drains) many of the sinks lack plumbing. Their convoluted basin configurations often preclude the containment of water. They hint at the transition from dirty to clean—death to life—but they lack the means by which to enact this transformation. Again, they are flawed objects from a domestic setting/system that fail to live up to their promises.

Elsewhere, the presence of water provides further contradictions. Water is a key element in Gober’s 1997 installation at the Museum of Contemporary Art in Los Angeles (now in the permanent collection of the Schaulager Museum in Switzerland). The central image of this installation is a nearly life-sized figure of the Virgin Mary (again, in concrete, like the image of Jesus—concrete defined by its cold, immoveable, and unforgiving nature) with a drainage pipe bisecting its abdomen, and standing over a large storm grate. There is no actual water present within this figure, but it is still part of the equation. Mary is literally a conduit. But of what? The gift of the incarnate deity? Grace? Our prayers and supplications? It is hard to know.

Water is, however, an active part of the rest of the installation. Inset in the wall behind Mary is a doorway that reveals an ascending wooden staircase. Rushing down the stairs and emptying into a hole in the floor are countless gallons of water. Is this a stairway from heaven that represents Christ’s journey from heaven to earth? Ascent of the stairs is treacherous, if not impossible. Maybe the cleansing act is found in the near impossible journey heavenward. But if our ascent is blocked by water, so is our descent.

On each side of the statue of the Virgin is a vintage suitcase, open. Peering into these we find storm grates in the floor. Beneath the surface can be seen aquatic plant life and a partial view of a man and child. All of these are submerged in water and all are studio fabricated elements. The scenes appear somewhat Edenic, but our full visual access is blocked by the storm grates. These are surely passages. They allude to a journey through their access via the suitcases.

We find wondrous things when looking beneath the surface. It is a world teeming with life. It is almost untouched by the hands of humans. Still, this is also a sewer. The water runoff surely contains all the impurities washed from the surface above. It is difficult to discern which environment is better—the one above or below. And this uncertainty is a reflection of Gober’s investigations of the domestic environment. Often, what first seems true and right might contain inconsistencies and vagaries.

Gober’s iconography draws enough associations with reality that we can decipher some of the artist’s intent. His exhibitions are like a Rosetta Stone, providing a key to translate the language of our contemporary culture and the obstacle course of the domestic setting. Gober’s work is not didactic. It reveals inconsistencies and uncovers our common questions. It does not seek to answer those questions, but reveal them. The answers only come when we begin to ask the right questions.
Posted by Musings on Contemporary Art & Artists at 8:45 AM

i saw 2 gober installations at the art institute of chicago last summer. what struck me at first was the double-take of craftsmanship in the pieces. then the sense of humour. and then the process of weaving the threads of meaning together. rich, allusive work. a much different experience live.