Frances Trombly & Conrad Bakker: The Value of the Overlooked

For centuries, two primary and essential qualities of artworks produced in the traditions of Western cultures were that they were highly mimetic and well crafted. For many, these still remain definitive elements for any artwork. Once artists began measuring the quality of a work by additional and alternative standards, however, the game changed. Materials came into question. An intentional, apparent lack of craftsmanship held weight as a legitimate conceptual concern. And, of course, representation became only one of multiple options.

Some contemporary artists have brought these traditions full circle. For them, the irony associated with a return to the representational, through high levels of craftsmanship, results in a fitting commentary on culture. Two American artists, one female and one male, are currently utilizing this approach as a way to call the viewer back toward an attention to detail.

Miami-based Frances Trombly produces work that is firmly rooted in the Feminist art of the 1970s. Her materials and processes are an extension of that aesthetic. For earlier artists, such as Miriam Schapiro, the utilization of fabric, sewing, and embroidery was directly tied to the traditional place women were assigned within society. These female artists used processes considered to be "women’s work" as an avenue to call attention to the lesser state to which women had been relegated. The intricacy and attention to detail of such works proves that these, and the works of their anonymous forebears, deserve equal scrutiny and accolades among the traditionally accepted artworks within the canon. 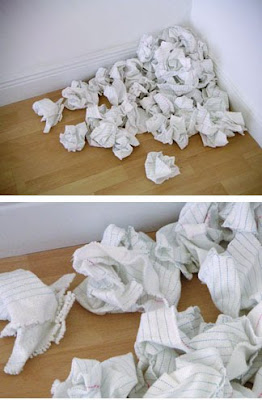 Trombly employs similar processes as the first generation Feminists, yet her considerations cover a broader range. There is a tinge of environmentalism, though probably a deeper concern with consumerism. The artist relies on processes that would traditionally be placed within the category of craft. She weaves the cloth that composes the substrate for additional embroidery work. In other works she knits or crochets non-utilitarian forms that appear, at first glance, to be consumer goods.

Consider both Garden Hose and Extension Cord. Each crocheted tube is produced as a stand-in for its namesake. The reproduction of a mundane, practical object, through time-intensive and craft-oriented means, is a nearly opposite strategy than that employed by so many other contemporary artists. Tim Hawkinson, for instance, has used actual orange extension cord—woven together—to create a pair of shorts. Both artists are fashioning somewhat innocuous items to be designated as objects of fine art. Trombly, however, seems to establish objects within a more camouflaged, everyday experience and environment.

Many of Trombly’s other works bear witness to the disposable quality of contemporary culture. These works may be camouflaged even more successfully because they initially appear as cast-off items--debris. Their placement is an essential consideration for their success. Paper Corner consists of what appear to be more than a dozen sheets of lined notebook paper, crumpled and tossed into the corner. In reality, these are sheets of fabric that the artist has woven on a loom. The likeness, in both thickness and coloration, to actual notebook paper disguises the work so effectively that one would likely bypass it if not for its location within a gallery. Receipt (Publix) exhibits the same properties. In this instance, not only has the artist woven the thin length of fabric, she has also meticulously embroidered the tally of supermarket items on the faux receipt.

It is in works like these that Trombly best calls into question the perceived disposable nature of our culture. What else do we bypass in our daily routines, considering it as unimportant and of no value? To press the issue further Trombly has produced several garbage bags or trash can liners. These drawstring bags are composed of hand-woven fabric which is then sewn together into fully functioning objects. She goes so far as to place one inside an actual garbage can (Trash Can)—making it ready to receive authentic trash. 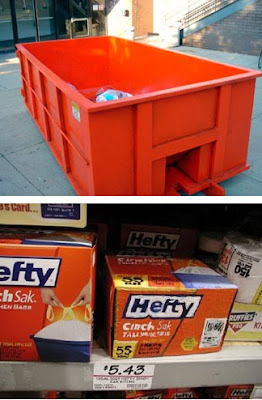 The subject of trash receptacles and garbage bags manifests itself within the work of Conrad Bakker, as well. Bakker’s work fails to exhibit the qualities of Feminist ideology so integral to Trombly’s, though concepts of consumerism and commodity are a priority. Bakker seeks to camouflage his works, too, but he often places pieces into situations and surroundings of everyday life so that they may be used or "consumed." But these are mute items that fail to function as their prototypes. Under the general heading of Untitled Projects, these works turn the concept of consumerism upside down.

Untitled: [Dumpster] is a full-sized construction dumpster sculpted from wood and painted to look exactly like the real thing. Placed outside of the School of Art building on the campus of the University of Illinois-Chicago, the sculpture was ultimately treated as its prototype when refuse was tossed into it. Again, as with Trombly, it takes more than perfunctory recognition to understand that this object is not what it seems.

Bakker’s garbage bags appear in the guise of a box of "Hefty" trash bags, again, sculpted in wood and painted to appear to be the genuine item. The artist retains a certain amount of the hand crafted in these works. They are not quite as slick and smooth as mass produced products would be. These "commodity" works are placed on store shelves next to their real life kin, photographed, and left. So the unique object, considered as culturally and economically valuable, is offered at the price of the mass produced consumer good.

More pointed references to the consumerist basis of a capitalist society are found in a more recent work entitled COMMODITY [Capital]. This sculpture mimics a volume of "Capital" by Karl Marx. Interestingly, this work, shown at the exhibition The Irresistible Force at the Tate Modern, finds its placement in one of the world’s most elite contemporary art venues. The Tate’s role in the rise of the YBAs (Young British Artists) through the Turner Prize provides an evocative foil against which to consider Bakker’s work. The trends toward excessive pricing and realized auction amounts, so often associated with YBAs like Damien Hirst and Tracey Emin, is countered by a work that calls our systems of valuation into question. 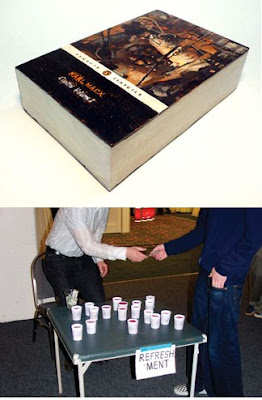 One final work by Conrad Bakker fully exhibits the playfulness and generosity that resides at the heart of the Untitled Projects. REFRESHMENT [Art Chicago] was equal parts installation and performance. Produced for the Art Chicago art fair, the work consisted of a simulation of a child’s lemonade stand. The card table, sign, cups, and Kool-Aid were all carved from wood and had painted to mimic a refreshment table for the wandering art connoisseurs and collectors.

Bakker sat at the table and sold individual cups of painted, wooden Kool-Aid to passersby for twenty-five cents each. There is obvious humor here, as there is in Trombly’s work. Refreshment provides an interactive component that more fully engages Bakker’s target audience. Those in attendance at a contemporary art fair know the rules of the game. They get the ironic references in contemporary art and are aware of the enormous sums paid for some of those same works. In a system where the middleman—the dealer—is often the contact person for the collector, Bakker has removed a layer and provided a confrontation that is not simply between the art and the collector, but with the artist himself—the originator of the idea.

In all the works discussed the hand crafted, representational nature is employed to hide the work from view. The viewer is caused to question not only our systems of valuation in the marketplace, but our unconscious valuations of life’s intangibles. The exquisite properties of those things that do not shout loudly for attention are possibly those things we most need. Family, friends, and those people who perform the lowliest tasks of life are truly the needful things.


The work of Conrad Bakker is also discussed, along with the work of several other artists, in Tyrus Clutter's essay Material Presence: The Sacramental in Art, featured in the SEEN journal, volume IX.2, 2009.
Posted by Musings on Contemporary Art & Artists at 11:17 AM