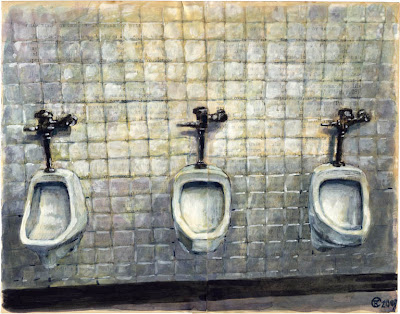 It is somewhat intimidating to begin a new series of paintings. This is especially the case when work seems like sure a radical departure from other current or existing work. And while style changes can prove a greater risk than subject matter, the fear of a lack of acceptance by critics and collectors presents itself like that nagging miniature devil on your shoulder—berating you for attempting anything new, different, or otherwise unacceptable.

I willingly admit that that little apparition spent a good deal of time on my shoulder when I considered a new venture in painting. After all, who would accept Tyrus Clutter as something other than a figurative artist? Isn’t that the brand that has been established for nearly twenty years? Then I had a little discussion with said devil that consisted of arguments on behalf of assemblage/construction works (which are increasingly approaching something far different from traditional figure painting), as well as this proposed series which actually alludes to the figure, though it doesn’t depict it. It was all part and parcel of the same agenda, so there was little point in talking myself out of it.

Nevertheless, I knew that I would need to make a case for the work, and that is what I am doing here. So I begin with the subject matter. Bathroom fixtures. Urinals in particular. I first became interested in depicting them when there was a show at my school (Olivet Nazarene University) during my freshman year of college. It wasn’t all urinal imagery. Only a couple drawings in the exhibit displayed them, but the artist took them out of context and allowed one to see that they did have some aesthetic characteristics that made them beautiful, not just functional. The other thing that has stayed with me from that year is the use of casein paint—a medium I observed in that same exhibit or another. I transferred after the one year, but I am glad to have gained something from the experience. 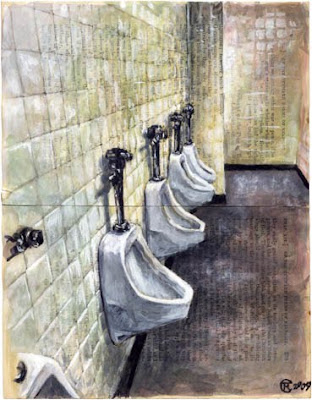 The question arises—why urinals? It may be more difficult for the female of the species to understand this, since she doesn’t use urinals, but there is an intimate relationship that men have with these objects. They directly relate to our anatomy. They fit us. It may seem rather crude, but it is the nature of the relationship. They openly accept us in our most humble state.

It is when standing before these porcelain structures that men are most vulnerable. We are literally exposed and unable to defend ourselves if need be. All our primal fears rise to the surface. Often, there are partitions between each fixture to create a semblance of privacy. When there are multiple fixtures lined up with no separating partitions it is basically a waste of money since most men observe the unwritten rule that they can’t stand directly next to another man in this vulnerable posture. An open urinal must reside between two men.

Even with this allotted space, the proximate presence of someone else may prove so intense that the intended task cannot be performed. Some men blatantly break the unwritten statutes and engage in idle chit chat with their neighbors. This breach of restroom etiquette can be nerve racking on those with the proverbial "shy bladder." It all reminds me of the time I stopped into a McDonald’s in Amsterdam because public toilets were almost non-existent. I knew McDonald’s would not let me down. They did, however, have an attendant who required a monetary tip for use of her facilities. Luckily, I was able to perform my task even though this attendant walked in to wipe down the sink and counter mid-stream. I was protected because my back was to her, but we weren’t in the red light district so I wasn’t expecting to have to pay someone to observe this very private act. It was unsettling. 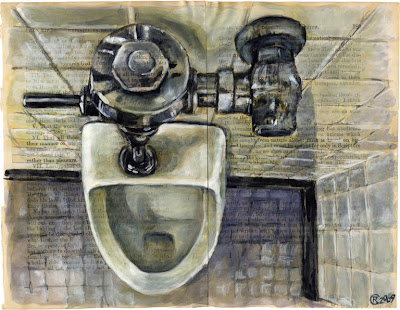 You wouldn’t think such a variety of emotions would be attached to such a simple porcelain device. The absence of the figures serves to illustrate the male psyche. It shows how connected our minds (spirits) are to our frail human bodies. We are not dualities but integrated beings.

This series is more about the contemporary American male than that gender in a very broad brushstroke. The discomfort with our bodies is not new, but there is a particularly contemporary strain observed here. Only with the removal of the physical bodies in these images is the full weight of the mental and spiritual completely exposed.

The Puritan strain that runs through American culture makes men quite different from our contemporaries in other world cultures, as well as from men of the past. Americans are far more obsessed with our physical bodies while still overwhelmingly prudish about their functions and processes. We are at once overly sexualized and startlingly priggish at the same time.

This series was created to make this point in a somewhat roundabout way. When an object can convey so much about the people in a culture, in the absence of those very people, it may be time to attend to some things.
Posted by Musings on Contemporary Art & Artists at 10:07 AM

Hey Tyrus!
Sometime when you get the chance ask a British gentleman to say the word urinal for you........
Your work is thoughtful - I'm sure you will show us something we never thought of before as with your other work.
Best wishes for Xmas and the new year.
My very best, Kathleen