Life Among the Thistles: A Prickly Proposal 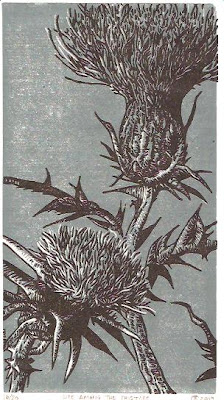 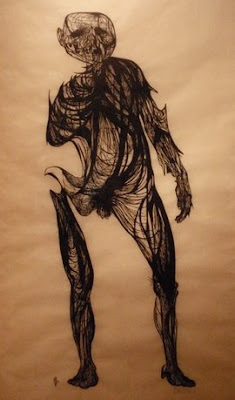 When it comes to woodcut imagery there are really two artists who have had the greatest influence on my style. The first is Albrecht Durer. He certainly set the high bar for all Western style woodcuts. I've even had some people tell me that my prints remind them of Durer's. That is quite an overstatememt of my abilities. If I spent the remainder of my career devoted solely to woodcuts I still doubt I could compete with Durer.

The second artist is a twentieth century master--Leonard Baskin. The darker, more tragic themes that run through Baskin's work were a barometer for the absurd and catastrophic events that marked the past century. Baskin, in my opinion, was the main reason that relief prints retained a viable place within the late twentieth century (that is relief prints of the more classical, highly crafted variety, not the cruder forms favored by the German Expressionists, which have their own aesthetic charm). The most prominent contemporary printmaker to continue Baskin's legacy is my friend Barry Moser. His style is somewhat different, but Barry learned the craft of wood engraving directly from the master. 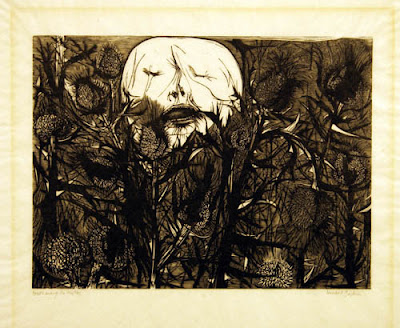 Some of Baskin's large scale woodcuts, like Hydrogen Man and Man of Peace, are no less compelling today than when he created them six decades ago. The line quality in these works and others seems to mimic the circulatory or nervous systems of the figures, making them appear flayed and in a more heightened state of torment. Aesthetically, the themes are certainly positioned on the sublime end of the spectrum.
The second piece of art I purchased for my collection was actually a Baskin print. This wood engraving entitled Death Among the Thistles evoked the same sublime cultural and spiritual angst as the above mentioned works. The agony of the moon-like face in a field of thorny thistles alludes to a torture and pain far worse than mere physical anguish. Baskin was able to present the intangible spiritual weight of the past century in pieces like this.
I have contemplated this piece for about a decade now. I would look at it almost daily to study both the deftness of the artist with the medium and the aching quality of the tortured figure. I always thought that thistles would be an interesting subject for a print, but never knew when I would really make that happen in my own work.
Recently, I came across a spare piece of linoleum in my studio and thought that it would be a good time to try my hand at some thistles. Wood engravings and linoleum blocks print the same way, but they are carved with different tools. Wood engravings can utilitze very fine lines that are simply not possible with the softer linoleum. So, with a small block of linoleum it is more difficult to produce a greater range of values. I decided, halfway through designing this piece, that I would produce it as a reduction block. This means that I cut away some areas, printed the block in gray, then finished cutting the remaining areas on the same block, and printed black on top of the gray. It allowed for more subtlety.
I decided that I would call this piece Life Among the Thistles. Baskin could get us to feel the weight of the tragedies of the twentieth century in his works. The desperation is right there on the surface. What I wanted to show was that life is really a huge field of metaphorical thistles. The events of our lives produce moments of deilcate beauty coupled with pain. We get pricked, scratched, and scarred. That is part of what it means to be human. Without those painful times to contrast with the joyful times, the joyful times would not be so precious.
Posted by Musings on Contemporary Art & Artists at 3:17 PM

Beautiful print Tyrus! I enjoy coming back to your blog from time to time-I always learn something (you continue to educate me!) Blessings-