Ann Hamilton: Changing History One Book at a Time 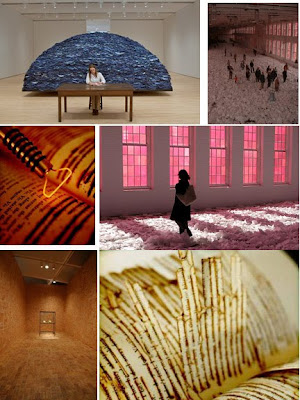 You hear it all the time. People are outraged to discover that American children are being taught “suspect” or “alternative” accounts of American historical events. The stories many of us grew up reading in our history textbooks are now vigorously debated and sometimes swapped out for transformed accounts. Having a broader historical base is a great thing, but we all seem to recognize that time marches on, adding to history, and some events are ultimately going to be covered less thoroughly because there is only so much space in a textbook and time in a school year.

The impetus for many of these changes comes from the philosophical precepts of Critical Theory. Most folks outside of academia have no idea what critical theory is, yet it impacts us all in nearly every facet of our lives. The art world is no exception. The various viewpoints of many contemporary artists are indebted to their study of critical theory, and the acknowledgment of that fact provides an enhanced understanding of the art of the moment.

The work of Ohio-based artist Ann Hamilton stands as an appropriate primer for those seeking a visual route to understanding critical theory. While Hamilton’s non-conventional media and materials could be suspect to those accustomed only to traditional art forms, analysis of the varying components of her work provides a nuanced discussion that is deeply informed by critical theory.

Having studied both fibers (or textiles) and sculpture, Hamilton soon expanded the scope of her work to include the contexts of larger installation settings that often include performance aspects, as well. The questioning of our accepted written historical accounts is at times a thematic element within the works.

Indigo Blue, an installation originally conceived for a location in Charleston, SC in 1991, is an extensively referenced Hamilton work which exhibits the artist’s tendency to question how those in power choose the way history is written. Indigo Blue was one part of Places with a Past, a larger, city-wide exhibition showcasing various artists. Hamilton had initially intended to produce a site specific work that addressed the specter of slavery in the American South. She changed her mind when she came upon an old auto repair shop located on Pickney Avenue—named after the woman who introduced the cultivation of the indigo plant to the U.S. This shop became the initial site for the work.

Aside from the primary color, the term “blue” had the additional connotation of “blue collar.” This was represented by a massive pile of 48,000 neatly folded shirts and pants. Yet the reference is not simply to the working men whose physical labor is the back bone of industry in this nation. Hamilton goes past the nameless, faceless male physical laborers to the support system behind them—an equal number of nameless and faceless women who mended and laundered the clothing of those blue collar laborers.

The artist enlisted a number of women, including her mother, to meticulously fold and stack the enormous pile of clothing. There was an additional performative element each day of the exhibition. A woman sat before the pile of clothing erasing words from an old history book. Not only does this reference the secondary coverage of women in recorded history, but the fact that the stories of these women, with each passing year, are forgotten and erased by time.

Hamilton employed a similar system of historical erasure for her 1993 installation, Tropos, at the Dia Foundation. Tropos provided a more transformative environment. The space was converted into a type of sanctuary, similar in conception to a gothic cathedral. The windows of the exhibition space were draped in a deep magenta colored silk. Not only did this provide a darkening, a quieting, of the light in the space, the pinkish hue also referenced the feminine. (note: the images shown here with silk covered windows are from Hamilton’s 2004 installation Corpus at MASS MoCA)

Visual cues were not the only indicators of a space set apart for “sacred” acts. The floor was covered with animal fur. The material tied the installation to the natural world and the soft undulations of the ground underfoot expressed something far afield from mere carpeting. The relation to animals, almost sacrificial in nature, again expressed a near religious environment.

Sound was also implemented in Tropos. It was the first form of language that one encountered. The recorded voice(s) broadcast through speakers were at times audible, though in this setting they came across in muted tones like chants or prayers. The other component of language, again, appeared in the form of a woman erasing words from a book. This time an electric tool was used to singe or burn the lines of text from the book.

Tropism, the term that provides inspiration for the installation, refers to our innate inclinations to react in particular ways toward certain stimuli. It is seen in plants when they lean toward a source of light . For Hamilton, this is exemplified by her greater trust in our “physical knowledge” than in our mental reasonings. Our bodies both learn and know how to respond over time. Those immediate responses—our natural responses—can often be trusted more than our mental gymnastics, employed to solve a problem or resolve a situation.

In Tropos the performing figure was doing more than merely erasing or changing historical accounts. Her actions were shamanistic or priestly. She was symbolically standing in for those history has forgotten. The smoke that rose from the ritual burning of the text acted as incense that cleansed us and our forebears from our sins of omission and commission. It is the ritual act—this very physical experience in a specific, almost sacred space—that speaks to our senses in a way that all the theoretical jargon of critical theory can only suggest in abstractions.

All Hamilton’s installations are meant to transform the spaces they occupy and transport the viewers past the thinking of our ordinary lives. In the fall of 2005 the Hirshhorn Museum and Sculpture Garden presented the installation Palimpsest (originally produced in 1989). It was contained in a smaller space than other Hamilton works, but the transformative quality was just as great. To enter the space one was required to remove shoes and then place sanitary medical footies over bare or stocking feet. A guard positioned at the entrance ensured that no one entered without succumbing to this ritual. Before ever seeing the interior of the room the viewer was prepared to enter an alternate realm.

Like the supple floor of Tropos the floor in Palimpsest was more like earth than concrete beneath the observer’s feet. The walls of the room rippled with loosely adhered newsprint sheets with handwriting scrawled across them. The floor contained “tiles” of similar newsprint sheets, but these were encased in beeswax. The use of beeswax acted as both a form of preservation for the fragile messages, but also obscured the messages and created a buffer between the viewer and the work.

A palimpsest refers to a manuscript that has been written, erased, and written upon once more, with traces of the original text still visible. The exhibit literally displays this, but does much more. With only a few visitors allowed to enter at any given time, the space, like most of Hamilton’s works, seems quietly sacred. The other element included in this space was a glass vitrine with two heads of cabbage slowly being devoured by twenty snails. This slow process of eating away the vegetation left paths and traces, as well. The slime trails of the snails covered the sides of the vitrine, and the paths they took while eating the leaves were very present, too.

Palimpsest is perhaps even more telling a work. It expresses, via somewhat odd elements, Hamilton’s response and relationship to historical accounts. History leaves a variety of messages for those who come after. There are many trails to follow and bits and pieces of many messages compose the fullness of what has transpired. History is written and re-written as new stories come to light. In the end we have a ravaged corpse (the cabbage) but that is the closest thing to truth we can conceive. No one person (or snail) possesses the complete, true path of history. Hamilton masterfully challenges us to consider the various viewpoints that compose our past.
Posted by Musings on Contemporary Art & Artists at 2:29 PM

i love ann hamilton's work -- her engagement with the body as a way of knowing and engaging the world, the power of language (and the results of the lack of that power), the ineffable and spiritual and the communal experience are all important ideas in her work. simply lovely, lovely, lovely. the art:21 series (all available as free downloads through itunes, btw) has a great piece on her for their spirituality unit.