James Ensor: Toward the Absurd 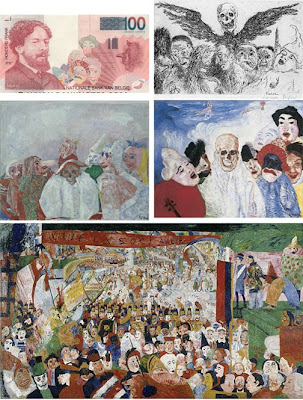 The exhibition "James Ensor" is on view at the Museum of Modern Art in New York, June 28–September 21, 2009


How do we know when a culture truly values its art and artists? This can be a difficult thing to gauge. Is it generous arts funding? National support of museums? A prominent role of the arts in school curriculums? These may all be indicators, but value is the key word here.

Before the introduction of the Euro as the monolithic form of continental currency, Belgium placed one of its most famous artists, James Ensor, on its paper currency. This was only fitting since Ensor was a master etcher and the method with which currency is printed employs similar metal plates.

Ensor is an artist’s artist. In other words, his work is known and respected by artists, historians, and critics, but he is virtually unknown within the general population. Like the Norwegian, Edvard Munch, Ensor was an artist much misunderstood in his own time, but highly revered by artists in the decades following his most important period of production.

Narratively and symbolically Ensor’s work continues to befuddle viewers. One can only imagine what his contemporaries first thought of his painted accumulations of masks and skeletons. While these were not entirely new elements for paintings and prints—Renaissance and Baroque compositions had no lack of them—their use in the era of Realism and Impressionism was confounding.

The deception and trickery associated with masks marks the work of Italian Mannerists such as Bronzino (consider his Venus, Cupid, Folly and Time). Yet skeletons and skulls are equally significant in Flemish art of the same period, and that is the tradition which Ensor continued. The etching and woodcut series prints, by Northern artists like Hans Holbein the Younger, depicted the theme of the Danse Macabre (Dance of Death) in which Death, as a skeletal form, comes to individuals of all walks of life, not respecting their, age, gender, class, or station.

Skulls and masks are also evident within the tradition of the still life as memento mori. This was a major sub-genre of Dutch and Flemish still lifes of the seventeenth century. An overwhelming array of objects found their way into these still lifes, not merely for their interesting shapes, colors, and textures, but as symbolic references to the brevity of life. The skull even shoes up in unexpected places in seemingly straightforward paintings of the period. Again, Holbein is a fine example as his portrait--The Ambassadors--contains a prominently displayed anamorphic image of a skull in the midst of an otherwise typical scene.

But that was all closer to the age of Rembrandt than the age of Monet. The symbolism of Ensor's work predated the Symbolism (as an art movement) of artists like Paul Gauguin and Ferdinand Hodler. As the color explorations of the Impressionists were beginning to find traction within the broader population, Ensor was turning the painting style on its ear by revisiting ideas and imagery of the past. Because of the shifts in themes in art over the preceding century, Ensor's work stands as one of the earliest examples of the appropriation that has marked so much twentieth century and contemporary art.

One cannot neglect, however, the reason that these objects originally made an appearance in the artist's work. He lived nearly his entire life in the rooms above his mother's curiosity shop in Ostend. Aside from the skeletal forms and masks, shells and Chinese porcelain make recurring appearances in Ensor's work. His skill was in recognizing the importance of the objects and their continuity within his cultural artistic lineage.

Again, like Munch, Ensor predated the work of the German Expressionists, as well as other continental forms of Expressionism. The Expressionists had an interest in more primitive forms of art, which for them included medieval imagery. Artists like Kandinsky, Heckel, and Nolde gained a certain permission to embrace the more macabre imagery that Ensor had developed with his skeletons and grotesque masks. And while the Expressionists were obviously the rightful heirs of Ensor's legacy, they were not the only group of Modern artists who benefited from his precoscious talents.

Both Surrealists and Dadaists found an ally in Ensor. The Surrealists deepened Ensor's forays into earlier forms of art by seeking to distill the essential, primal elements of art within our common human psyche. The Dadaists, on the other hand, took the absurd nature of Ensor's images of skeletons--apparently conversing or performing some dramatic act--to a higher level of absurdity. Dadaist dramas and imagery pushed the illogical to a level that was not reached again until the late 1950s and early '60s.

For Ensor, the appearance of stage-like settings and carnivalesque imagery were equally natural as the appearance of objects found in his mother's curiosity shop. The artist's hometown of Ostend still plays host to the carnival the artist frequented more than a century and a half ago. The swirl of activity accompanying a carnival is mimicked in the pulsating crowd that fills the streets of Ensor's most recognized work--The Entry of Christ into Brussels.

This work, and others from the last decade of the nineteenth century, owe a debt to the English painter JMW Turner. Turner was also an anomally within the field of painting in his day. He was not exactly what one would consider an Impressionist, but his atmospheric effects certainly owe a great debt to the French painters who were his contemporaries. The swirling, undulating scenes that Turner masterfully depicted share similarities with Ensor's pressing crowds. Even the loose drawing quality of Ensor's etchings exhibits Turneresque compositional elements.

While Ensor's work may seem little more than weird, slightly off, to the contemporary viewer, it is essential to place it in the context of the late nineteenth century. Flanders may have been a fertile region for artists centuries earlier, but other than Rene Magritte, most are hard pressed to name another renowned Belgian artist from the past century. This is why Belgium justly celebrates Ensor. He was such a unique and quietly influencial figure and a figure worth reconsidering in today's art world.
Posted by Musings on Contemporary Art & Artists at 11:14 AM