Let me show you my etchings... 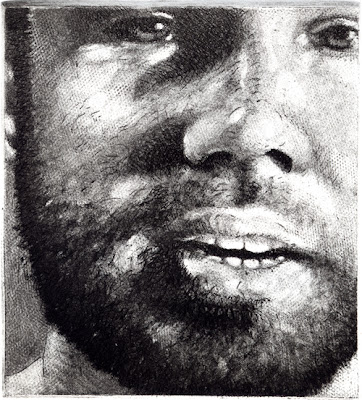 I often work on the carving of my relief prints in public places. If I have a particularly intricate linoleum or woodcut design that will take hours and hours to carve then I break it up over several weeks or months. The process can both be tedious and tiresome, so I keep the block in the car and work on it at Starbucks for an hour or two between appointments or classes. This provides an introduction to all sorts of conversations and I see it as an extension of my educational work with the broader public.

As annoyed as I feel inside when a stranger refers to my process of carving as “making a stamp,” I do understand that the terminology provides a way though which many people can enter the process. Most comments are made concerning the carving alone. It is only through further explanation that these casual observers recognize that the finished artwork is not the block itself, but the eventual transfer of the image onto paper.

Etching is also a form of printmaking, but it is such a foreign process to most that it takes a bit more explanation to understand. In fact, Some people assume I am “etching” when they see me carving a wood or linoleum block. Etching, by its very nature, cannot happen in such a public setting as Starbucks. It requires materials that are not quite so portable.

The main difference between the way woodcuts and etchings are produced is the way they are printed. Carved wood and linoleum blocks print from the high surface, from the areas left after the carving has been completed. Etching, one of several intaglio processes, prints the ink from the recessed areas, those lower than the top surface of the plate. Ink is pushed into those recesses and the top surface of the plate is wiped clean. The plate is then run through a press which forces paper into those recessed, inked areas to offset the image.

That is the quick explanation. Etching is different from most of the other intaglio processes because an acid actually does the work of making those recesses in the plate. That does not mean that producing an etching requires no physical labor on the part of the artist. An etching plate can be manipulated and changed in several ways as the artist works toward a final image. 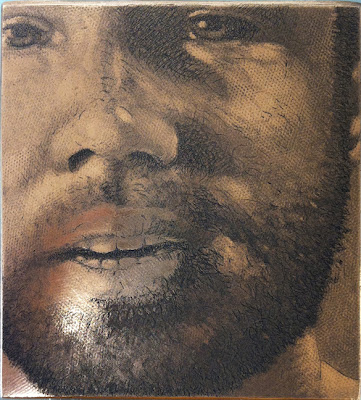 The etching shown here is one I produced to show my students the processes of hard ground and soft ground etching. I find people are more familiar with the hard ground etching style. The result looks like a pen and ink line drawing. In this process the metal etching plate is coated with a material that protects it from the corrosive effects of acid. The artist takes a sharp tool and scratches a drawing or design through that protective coating. When the plate is placed in an acid bath the exposed lines are bitten into recessed areas of the plate. The acid does the work, not the scratching of the artist. The longer the lines are exposed the deeper, darker (and sometimes wider) the resulting lines will be.

I used all of those methods in this print. You can see the progression of the image through the eight different states. I did not want the fabric texture to obviously read as fabric. Several times I bit in a texture for a few minutes, then re-applied soft ground and did another fabric texture for a similar amount of time. Slowly, the values were built up in this way. Essentially, little dots of value are being bitten into the plate, not unlike what we see in a close up of a computer printout. These are like pixels.

You will also notice that some areas get lighter from one stage to the next. That happens through scraping and burnishing the plate. This is the more physical part of the process. It is like using an eraser on a drawing. Metal tools actually remove thin layers of the surface of the plate so that less ink is caught in the recesses. The recesses actually become shallower. When this is done multiple times, along with the areas being repeatedly bitten with soft ground, very delicate grays are possible that look less and less like a fabric texture.

Many of the etchings I have made over the last decade or so have either been inked in colors or have employed text in some way. My process for developing those plates is similar, but many of those prints are far less realistic. I created this print as a stand alone work, but I also wanted my students to see what possibilities are available in this process. It is fairly easy to make a bold soft ground texture, but not necessarily easy to do that well. And when “mistakes” are made in the plate there really are ways to get rid of them and totally change the image. However, as with all art making, it does take time and work.


Posted by Musings on Contemporary Art & Artists at 11:27 AM