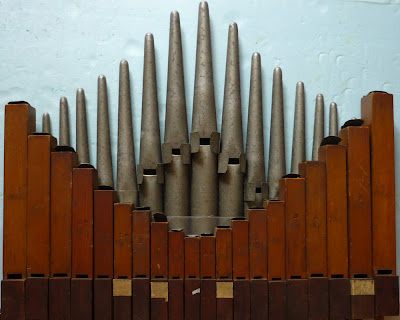 Each individual artist works at his or her unique pace. I have some artist friends who are so prolific that I still cannot comprehend how they complete so much work. Other artists may only complete a dozen or so works in a year. That can sometimes mimic the quantity of my own output, though that has more to do with teaching nine months or more during each year. And some artists who work full-time on their art are simply just methodical and thoughtful craftsmen, so their output can be nothing other than minimal.

Because I work in a variety of media, some pieces naturally take longer than others. I have stated previously that the altarpiece constructions tend to be multi-year projects. There are several reasons for that. The actual construction of the boxes takes some time, followed by many additional steps in the finishing process of the exteriors. The painting portions take some time, too. Additionally, there are years of “fermentation” time during which I think about the form, imagery, and objects that will compose these works. The complexity of the work dictates this kind of extended timetable.

A few years ago I first mentioned that I had rescued two keyboards from an old, discarded organ. I had not yet decided how I was going to utilize them. In the intervening years I have worked on various sketches and changed my mind numerous times. Early on I had decided that this piece was going to look somewhat like a pipe organ. Just how I was going to achieve that look was uncertain. 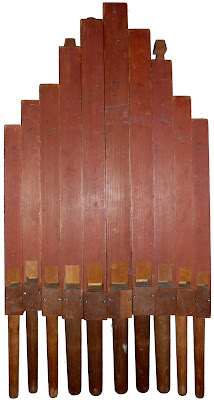 I regularly spend many hours wandering the aisles of home improvement stores, considering how I might use materials in ways that are typically dissimilar from their intended purposes. While doing this, I worked through a few different concepts for the pipes for the “organ” project. For part of the time I considered using metal pipes. There were various types of metal pipes that I considered, but they all seemed too heavy. Then I thought about using PVC pipe, applying gold leafing so it would appear to be metal. That solved the weight problem but the time investment seemed a bit burdensome.

Eventually, I returned to the core of my original concept. I wanted this to look like a pipe organ, but finding actual organ pipes was going to be difficult. Then I thought of one of my favorite places to find inspiration—eBay. There were often pipes available there but most were full sets from old organs and they cost many thousands of dollars. They were also far larger than what I intended to use. It took a few months, but I finally did find some small sets of pipes that were perfect for my design.

One change, that I had not previously been considering, was the use of wooden pipes. I found some small wooden pipes and then some other, larger ones. The small ones were just the size I had been searching for. The larger ones, I decided, could be used more structurally within the piece; more as a decorative embellishment. However, I still wanted to use some metal pipes. Those were elusive. But I did manage to track down a set that fits perfectly with the smaller wooden pipes.

Sometimes I am willing to make slightly larger purchases for materials, for the sake of the artwork. This piece needed the authenticity of the actual organ pipes. They are, however, only one portion of this much larger project. I expect this construction will be far larger than any previous  altarpiece works I have completed or designed. The pipes and keyboards are just a couple portions of a much greater scheme. I look forward to sharing more of the process as I begin constructing the work later this year.

Posted by Musings on Contemporary Art & Artists at 11:59 AM