Louise Bourgeois: Farewell to the Spiderwoman 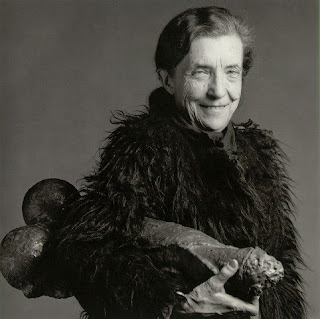 The world said goodbye to one of the most acclaimed “artist’s artists” on May 31, 2010. Louise Bourgeois was not a household name, but she did influence several generations of artists with her provocative and seemingly contradictory images. Since she lived to the ripe age of 98—working well into her 90s—it is no surprise that multiple generations have looked to her for inspiration. It is hard to imagine artists like Kiki Smith creating such mythical and symbolic works without Bourgeois as a forerunner.

Bourgeois was born in France to parents who worked as tapestry restorers. The mosaic of that household, with all its traumas and dysfunctionalities, was the endless well for her creativity. Her father was a charismatic philanderer who openly carried on an affair with the live-in governess. Though her mother tried to shield the children from the situation, she also acted as if the affair did not exist. The artist, therefore, somewhat loved and distained both parents. 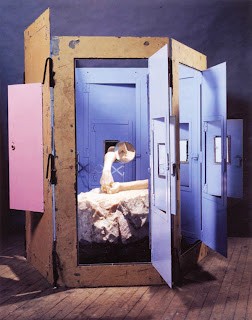 By 1938 Louise had met and fallen in love with an American art historian. They married and she moved with him to the United States. During the next decade she became ensconced in the old boys club of the mid-century artworld. She studied with Stanley Hayter and several of the leading Surrealists at Hayter’s relocated Atelier 17 in New York City. Though Bourgeois denied any attachment to Surrealism, she was part of the influx of European Modernists who had converged on New York, transforming it to the art capital of the world. She had a rather successful career during this time—a period when many outstanding female artists, such as Lee Krasner, were still relegated to the backseat of the artworld bus.


During the next two decades Bourgeois seemed to disappear into obscurity. She continued working steadily as her art, quietly, changed the way women were perceived within art society. The questions she was asking and the ideas she explored were especially influential on the new generation of feminist artists. 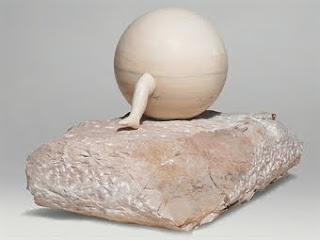 It wasn’t until 1982 that Bourgeois was suddenly omnipresent within the artworld. The Museum of Modern Art held a retrospective of her work—the first for a woman at that institution. At the age when most Americans would have been approaching retirement, Bourgeois was just about to begin the most important decades of her career. This is where the contradictions began to be evident. This tiny senior citizen was creating chiseled marble sculptures. This grandmotherly figure often produced overtly sexualized images—like the infamous sculpture tucked under her arm in her portrait photograph by Robert Mapplethorpe. But she also produced sensitive watercolors and doll-like figures sewn from her old clothing. The variety of materials appropriated always made her difficult to pinpoint.
In recent years Bourgeois has most often been associated with her spider sculptures. These tend to be gigantic spiders that hover over the viewer, transforming him or her into prey. Typically exhibited in public settings, these spiders are made on a human scale. The spider image is derived from the artist’s mother and the family tapestry business. Bourgeois saw her mother as a protector and a weaver. Still, the ominous quality of the spiders cannot be fully explained through analogies to the artist’s mother alone. 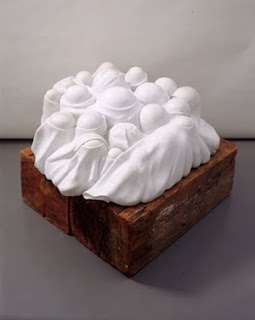 The marble sculptures of Bourgeois exist singly, but also as elements within larger works. Often, they are in the form of disembodied appendages. The body is always the central image of Bourgeois’s work, even when it is absent. Hands, feet, and headless and armless bodies remind the viewer of the traumas of life and the severings that populate our relationships. Figures exhibit amputations that recall the effects of tattered relationships.

Other marble sculptures mix the sexual characteristics of males and females. The artist never saw herself as a feminist, per se, though the evidence of her childhood experiences and relationships to her parents bleed through in these works. The rounded and organic forms are at once abstract compositions, but they can simultaneously be read as hybridized breast and phallic forms. They are inter-sexed works that allude to the physically complimentary nature of men and women. The red watercolor seen here, with a clearly male figure seemingly carrying a fetus within its womb, creates a similar effect. 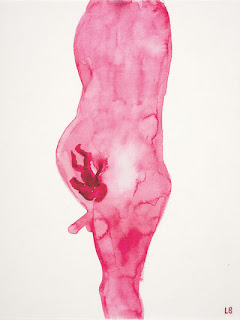 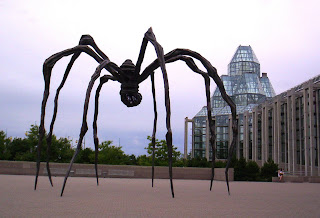 The spider is certainly feminine for Bourgeois, but it seems to represent a mixture of the mother and the governess. The female spider is protective, but it has an element of temptress to it. Bourgeois created small room-like installations that she called “cells’ or “lairs.” The latter term relates specifically to the spider. When the lairs are created with wire fencing they have a web-like appearance that doubles as a place of confinement. It is contradictions like these that make Bourgeois difficult to decipher. From one work to another, and sometimes within a single work, the symbolic imagery can read as multiple things all at the same time. 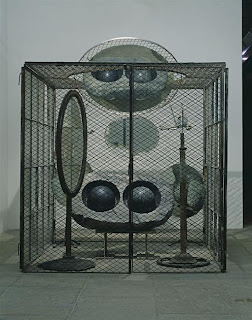 Along with the fearful emotions that are conjured with many of the artist’s works, there is an alternate side of healing that is also derived from Bourgeois’s youth. The doll-like sculptures, sewn from remnants of the artist’s old clothing, relate to the mending of worn tapestries. These dolls, or puppets, are reincarnations and reanimations. The new life found in these works is like the adage of “making lemons into lemonade.” Bourgeois has taken the tatters of the childhood she was handed and turned them into works that go past the hurts of her youth. These were not art therapy for her, but a way to deeply touch these similar wounds in others, that all may move past their common tragedies. 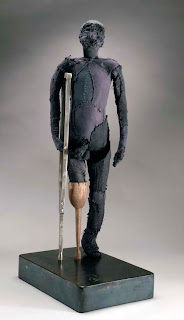 Bourgeois was an artist who adapted to the times. She lived through the days of Modernism, when the Cubist abstractions of Picasso were seen as revolutionary. Unlike Picasso, and many other Modernists, Bourgeois significantly adapted her work in startling ways over her many decades. The message remained the same though she was able to develop new processes to speak to new times, influencing countless younger artists along the way.
Posted by Musings on Contemporary Art & Artists at 5:10 PM