To End at the Beginning 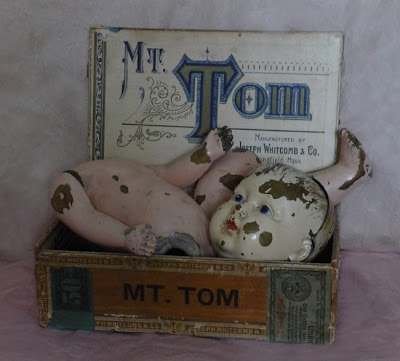 I have worn a variety of hats in my professional life: teacher, administrator, curator, art critic, and more. No matter what my official title is at any given time, there is one title that always remains—artist. It is something that is integral to my personality and the artist’s mind and mode of seeing cannot really be turned off at will. That means that new and in-process works are always rambling through my head, often when I least expect them.

There are certain times when I am actively seeking ideas and inspiration. When I visit flea markets and antique shops I have a couple goals. I tend to have a mental list of items I’m seeking. Odd objects that will become relics within larger altarpieces are often located on these excursions. No matter how the idea for an altarpiece originates—from an object I have already found or an idea that came from something I read or heard—I tend to envision additional objects as I sketch the design. A rooster (really just a chicken), a lamb, a doll’s head, a platter, a honey dipper/dripper. All of these have been on my list and were found on one of these trips (Of course that elusive chameleon is still on my list! I think it is just blending into its surroundings).

I now stick by the rule that if I find an item, even when I’m not searching for it, I better get it. When I lived in Massachusetts there was a great flea market I sometimes attended on Sunday mornings before church. My friend George and I would get up at 5 AM in order to paw through the assorted trash and treasures before heading out to mass. I will be incorporating my finds from the Todd Farm flea market for decades to come. My other reliable haunt was the antique shops in a small town in New Hampshire. That is where I learned the lesson to buy it right when you find it.

On what I would guess was my second trip to these antique shops, I happened upon one of those life-sized Christ child statues/dolls that churches often display in a manger around Christmas. Mind you, I was not in the market for one and I also had no idea what I would do with the thing if I bought it. I do recall that it was priced higher than what I was really willing to pay. I was drawn to the worn quality of the object. It was missing fingers and had scars and abrasions over its surface. So, I gathered the objects I planned to buy, made my purchases and went home without baby Jesus.

The Christ child would not leave my mind, however, as Jesus is often want to do. I tend to be enchanted by objects no one else would, so I returned later that week expecting little Jesus to be there waiting for me. I was wrong. I still didn’t know what I would have done with it, but I was greatly disappointed that I didn’t obtain it when I had the chance.

Several months later I returned to the New Hampshire antique shops with my friends Barry and Kathy. We had spent the previous day in meetings and part of my thank you to them was this trek to our immediate north. Barry is known for his assemblage work and I knew he would be delighted with the shops. He ended up filling his suitcases for the return flight to California and I even had to mail an additional box of items to him later.

I picked up some old cameras, a bunch of skeleton keys, and some old iron claw feet from a bathtub. I figured I would find a few items but I didn’t expect to be fascinated with an object I was not actually seeking. Inside a glass display case I spotted an antique German doll. It wasn’t exactly that missing baby Jesus, but it elicited a similar response. This doll was made from pressed metal. The head and legs were detached from the torso and the parts were piled in a wooden cigar box. It was also placed in a price range I was reluctant to enter.

The siren call of the dismantled infant eventually proved irresistible and I purchased it, having no idea what I would do with a dismembered doll. The doll lounged in its cigar box daybed for several months. I passed it daily and contemplated its meaning. Since it had reminded me of that baby Jesus I had passed by, I kept mentally interrogating its purpose within my studio.

One day, while working through the sketches for a crucifixion piece I was developing, the meaning of the doll struck me clearly. This small object was the complete history of Christ. It was the miraculous birth of the incarnate God, yet it was also the foreshadowing image of the adult Christ. Here, the infant of the Christmas story was also revealed as the object of ultimate sacrifice and salvation for all humanity.

As the relevance of this relic for an unknown altarpiece construction revealed itself the other elements of the work quickly fell into place. I learned a good lesson with the doll. Trust your instincts. I see many objects at antique shops and flea markets that spark an interest, but few have captivated me to this degree. I now understand that when they do I need to bite the bullet, spend the cash, and wait for the next artwork to reveal itself. These unconscious symbols surround us. It is the role of the artist to connect the dots and uncover their hidden meanings.
Posted by Musings on Contemporary Art & Artists at 2:29 PM