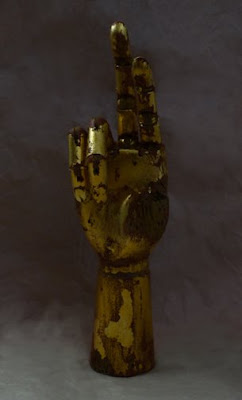 As I prepared for a one month teaching stint in Italy in 2006, I had a list of artworks, altarpieces, and locations with and at which I planned to spend some quality time. I had been in Italy for a little more than a week in 1991, but that was before I had ever taken an art history class. In the intervening years I had taught art history to hundreds of college students and the altarpiece had become a significant form within my own work.

I was lucky enough to have a friend from Boston who was living in Florence at the time. So I spent a few days with him and planned my schedule so that I could see as many works as possible. This, however, did not include entering Florence’s domed cathedral (the Duomo) or visiting the Academia to see Michelangelo’s David and Slaves. I had already seen these works and, though they are worthy of multiple extended visits, I knew there were some less widely known works I had not previously seen that would prove to be better stops during this pilgrimage.

I spent the better part of one day in the Uffizi Museum. One morning was devoted to the convent of San Marco with the frescoed cells of Beato (Fra) Angelico. The final morning found me crossing the Ponte Vecchio bridge to see Pontormo’s masterful Deposition and the Brancacci Chapel at Santa Maria del Carmine.

At both the Uffizi and the museum at the San Marco convent I did the type of sketching I had anticipated. The frames on various altarpieces and smaller devotional works were intricately carved and gilded. Reproductions in books never do these details justice since they are flattened. Some books even leave the frames off completely. Though I don’t try to make the constructed portions of my own altarpieces quite like their renaissance era predecessors, I do gain valuable information from studying them closely.

What I had not expected was the impact reliquaries and medieval wooden statuary would have on me. I came across these beautiful and curious objects in unexpected places. In Florence, I did not shun Michelangelo completely; I visited his Medici tombs in San Lorenzo. Like many of the churches in the city it also has an adjacent museum. The gilded bones and odd possessions of long departed saints were encased in complexly designed, jewel encrusted structures.

Back in Orvieto, where I was spending most of my days, I visited the museum of the city’s cathedral. It had an exhibit of work by Simone Martini. His international gothic style Annunciation has always been inspiring as an altarpiece form. Some of the other works on display, but not in that exhibit, were what really drew my attention. Several worm eaten wooden sculptures of saints simultaneously possessed a sense of decay and a tender, life-like presence. I took detailed notes concerning their condition. Later, on several visits to the Metropolitan Museum of Art in New York, I studied similar medieval statuary. While they intrigued me, I wasn’t sure how these sculptural works related to what I was presently pursuing in the altarpieces.

When I found a broken wooden hand mannequin—the kind artists use when sketching out hand gestures—I began to see it as a reliquary object. It was on clearance at an art supply store so I picked it up for future use. It is becoming a hybrid form, and is still in process. The wooden sculptures I had been studying are typically painted (polychromed) in life-like colors. Reliquary objects are often coated in gold. This hand resides somewhere between these two forms. It is both worm eaten, weathered wood and a mystical golden relic. It connects to an ancient past but is also of this contemporary moment.

What the hand means within the larger context of a specific altarpiece will be up to the viewer to conceive. I have my concept for this relic, but I don’t want to reveal too much about the work before it is finished. Keep reading future posts for further details.
Posted by Musings on Contemporary Art & Artists at 1:37 PM