The Story of Asher Lev 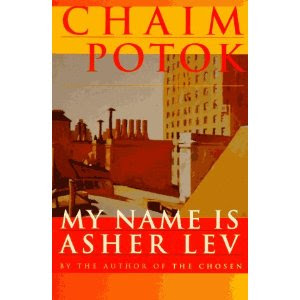 I recently reread two books by the author Chaim Potok. Many people are familiar with his writing through the book The Chosen. That title continues to be popular on school reading lists and it was also turned into a major motion picture. However, the books that I revisited are the ones about the fictional artist Asher Lev. They share a common theme with Potok’s other books which focus on the lives of observant Hasidic Jews. The Asher Lev books center on the title character, who is an artist.

The first of the books is My Name is Asher Lev. It was actually required reading for all students at the college that I attended. I first read the book for my Drawing class and then again for a capstone course when I was a senior. As the only art major in the second class I was regularly questioned about all things in the book relating to art and art history. I was certainly glad I had read it once before.

Once I began teaching college level art courses I adopted My Name is Asher Lev for my Senior Seminar class for art majors. Even the students who resisted any and all reading assignments came to love this book. The story investigates the balance between the life of faith and the art world—showing that the two can often seem in conflict for those with a strong, conservative religious bent. I read this book every year as I taught that course and was continuously amazed by my discovery of new things each time I reviewed the work.

I find that rereading this book always pushes me to evaluate my life as an artist. That is why I chose to read it once more in 2012. I wanted to examine my artistic self at this particular stage in my life and I knew this book would pose the questions that I desired to ask myself.

While Potok does a stunning job of creating an engaging narrative set in a believable world, I have always had one small problem with the way he describes Asher Lev’s mode of seeing. The young artist, Lev, is a child prodigy in the field of art. His parents cannot prevent him from drawing every nuance of the Hasidic Brooklyn world which they inhabit. Drawing is like breathing for Asher. The author describes the way Asher sees people and objects as if it is through a lens that dissolves each item into seemly Cubist shapes. As an artist, I always found this portrayal unrealistic, but I suspend this critical analysis while reading the book because the concept makes complete sense within the fictional world of the story.

Both My Name is Asher Lev and the sequel, The Gift of Asher Lev, are ultimately tales of surrender. The act of surrender is far more complex than our contemporary concepts. We may understand the need to surrender but we often understand it in terms of a clean cut resolution to a conflict, neatly confined to the thirty or sixty minutes of a television drama or the two hours of a film. Real life conflict and surrender rarely fit within such neat and tidy packages.

For Asher, the idea of surrender is tied to competing traditions. First is his religious tradition which is inextricably linked to his family heritage. He is part of a dynasty that is deeply connected to the leader of their religious sect. This leader—the Rebbe—comes from a line of religious leaders who have sought a renewal of traditional Jewish religious practice and the ultimate messianic salvation of the Jewish people. The opposing tradition is the world of visual art and its secular base. For many in Asher’s religious community these two cannot be reconciled, but the wisdom of the visionary Rebbe sees past the dichotomy and Asher plunges headlong into the world of art, while still keeping his feet firmly planted in Hasidic tradition.

Surrender comes into the equation when Asher must decide how completely he will give himself over to the direction of his artistic inspiration. He must, simultaneously, surrender to the will of his people and his muse. The resultant decision marks the central conflict within the novel, which is actually brought about through the artist’s synthesis of earlier conflicts in his life. That central decision places him in a position in which, at the end of the novel, Asher seems condemned to a perpetual balancing act between these two forces. 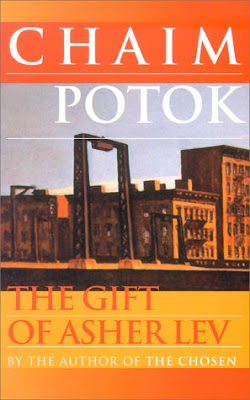 The second book, The Gift of Asher Lev, finds Asher twenty years later, married, with two children, and living in France as a successful artist. The comfortable life he has carved out for himself is soon disrupted with the news of his uncle’s death. Upon the family’s return to the Hasidic Brooklyn enclave of his childhood, Asher discovers one riddle after another. Some riddles are answered within the novel while others are left unresolved. The key riddle, again, is answered with a form of surrender.

As I age, as an artist, I find The Gift of Asher Lev to be a more compelling story. Potok’s writing is more subtle and refined. The doubts faced by an artist that necessitate an evolution of style and form are accurately portrayed. The anxieties and surrender are handled with complexity and maturity.

The gift mentioned in the title is actually multifaceted. One would expect it to reference Lev’s gift of artistic talent. That is, however, only the most obvious reference. The gifts can also allude to Asher’s family. His wife and his children are a gift. The gift is his family heritage, his life in France, his successful art career, and his faith. The gift is also connected to the secret art collection of his recently deceased uncle—this is also one of the novel’s riddles. And the surrender is both a surrender to some items and circumstances as well as a surrender of some others.

Each time I get to the climactic moment in The Gift of Asher Lev it is an emotional wrenching. I know what will happen. It has not been a surprise since the first time I read the book. Still, the tale is so engrossing and the characters so compelling that I cannot help but get caught up in the story. This is why I often suggest these books to people. For artists, they are essential, but for others, they are simply gripping fictional tales.