Tim Rollins and K.O.S: A History 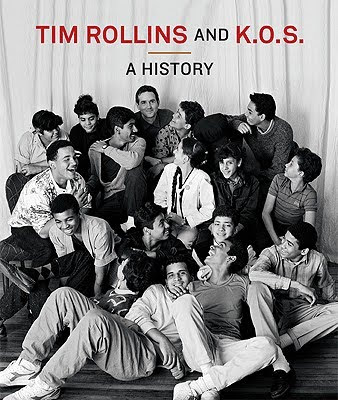 There has been sufficient literature on the collaborative works of Tim Rollins and K.O.S. (Kids of Survival) since their debut in the mid-1980s. Still, there has never been a unified source that both provides a solid history of the art and artists along with an analysis. Ian Berry serves as the editor for this new volume that affords a breadth that alludes to the complexity of the works and the artists.
The historical backbone for the book comes partly from the dissertation of James Romaine, who is also one of the contributors. I expect that is from where the bibliography for the book and the list of exhibitions come. Romaine is nothing if not precise and Rollins often joked during the years of the dissertation’s completion that James knew “how many socks I have in the drawer.” The essay by Romaine provides insight into the early years of the art collaborative and some background about Rollins’ early years in rural Maine. It is essential for an understanding of both Rollins and the work of his young students/collaborators.
Julie Ault, a longtime friend of Rollins who met him at the University of Maine at Augusta, and later worked with him in Group Material, yields a brief essay that accurately portrays the artist’s charismatic personality. The brevity of the essay should not invite an interpretation that it is slight. In fact, as the opening text of the book it is a superb piece to set the stage for the remaining essays. Brief inclusions by the late Felix Gonzalez-Torres (also a member of Group Material for a time) and Lawrence Rinder are key pieces that complete the fuller picture of Rollins and K.O.S.
Since much of the work by the Rollins and K.O.S. is based in concepts some would view as political (or even identity based), individual pieces and series are ripe for interpretation. David Deitcher offers some excellent analysis of the collaborative works. His consideration that the “wounds” painted on the pieces based on the text of Stephen Crane’s The Red Badge of Courage seem to suggest the lesions of Kaposi Sarcoma—often associated with those suffering from AIDS—is appropriate for works created in the mid-1980s. While this may not have been the full intent of the group, and Tim may have prompted the young artists to consider “the civil war that rages within everyone who chooses to fight life as it is,” there is no denying that the ravages of AIDS in New York at that time were subconsciously on the minds of all the city’s inhabitants.
Indeed, Deitcher’s essay seems to use queer theory as a primary lens through which to view the work of Tim and K.O.S. He extends the discussion of AIDS and its impact on the gay community to the paintings based on Daniel Defoe’s A Journal of the Plague Year. The bold triangles that appear in several of these works are noted to be an association with the stigmatic marking of gay men in Nazi Germany—the pink triangle, similar to the gold star that marked the Jews. Of course, the pink triangle was beginning to be used as a symbol of gay pride by the 1980s. This may, however, be an oversimplification of the imagery as the artists utilized the triangular form in works related to Martin Luther King, jr., as well. 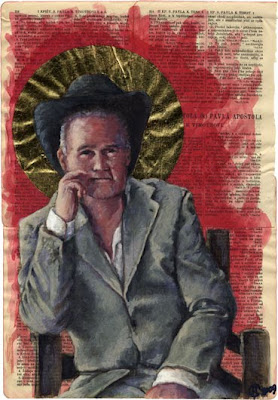 Similarly, the use of animal—specifically lambs—blood in some of the Defoe works, but especially in those based on Flaubert’s The Temptation of St. Antony is viewed by Deitcher as an association with the blood borne disease of AIDS. The essay somehow misses the religious connections of lamb’s blood. While contemporary art can often employ Christian symbols ironically, that is never the case with Rollins. It is the essay by Eleanor Heartney that takes up this nuance of Rollins and K.O.S.’s work.

Heartney is no stranger to contemporary mixtures of Christian imagery and high art. Her book Postmodern Heretics

is an essential analysis of the topic. Her essay here considers the religious background of Tim, his return to the church in 1990s, and the overwhelmingly Catholic faith of the artists in K.O.S. While she does not detail the associations of blood to Old Testament sacrifices or Christ as the Lamb of God, Heartney does examine further works like the prints inspired by Haydn’s The Creation oratorio. She also suggests the that the triangles of the King works relate to the “mountaintop” that Dr. King mentions in the printed speech.

Heartney acknowledges associations to the religious in some of the most well known works of Rollins and K.O.S. Works based on Ralph Ellison’s Invisible Man exhibit an enormous IM across pages from the book. The letters evoke several things aside from the book’s title. Dr. King famously stated “I am a Man,” but the name/phrase “I AM” is also the name of the God of the Jews, as given to Moses. It is the complex readings that make the work intriguing.

The interview with Rollins and Berry seems to fill in the remaining pieces of the book and provides a sense of the artist’s personality. Throughout the pages are lush examples of the collaborative works—many that are not even covered in the essays. Additionally, the authors do not hesitate to bring up the controversies that have swirled around Rollins and K.O.S. over the years. Is the work really Tim’s alone and the “Kids” just a tool to receive artworld attention? Why is Tim using traditional western masterworks as the basis for the work? Isn’t that a bit WASPy considering these kids are from the Bronx? Is Tim not just pushing his own political or religious agenda? All of these and more are firmly countered by the authors. The work stands on its own. Its strength lies in the resiliency of the artists who made it.

This book is not for art enthusiasts alone. The story of Tim and K.O.S offers inspiration for teachers of all subjects. The history of this collaboration gives hope to the hopeless and that is a rare thing in this day and age.


Tim Rollins and K.O.S.: A History

love love love tim + KOS, and this book is probably my favourite about him and them. a wonderful picture of community and commitment.

It was a wonderful time. Tim was alway commitment.we all were learning to be commitment to him and our passion we all had for art.It was not easy time but a awsome time to grow and learn with each other we were united.Tim work hard on us he did not give up that easy.I am proud to say I was part of our group.