Jenny Holzer: A Word by Any Other Name 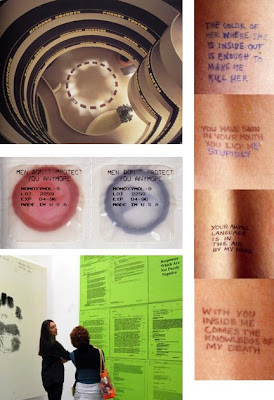 The words we don’t use are just as important as the ones we do. This concept has appeared as a major tactic and practical policy of politicians for years. The public implementation of politically correct speech is an obvious example. In the 1990s, particularly, there was a push to phase out certain words that were deemed offensive to ethnic groups or other portions of the population. And politicians on both ends of the spectrum are acutely aware that what reaches the ears of the masses either by omission, or strategic changes in terminology, influences public opinion.

Jenny Holzer was one of the first visual artists to understand and utilize the written word as a powerful medium within visual art. Though Holzer began her career working in the media of painting and printmaking, she shifted to the use of words in the late 1970s while taking a course through the Whitney Museum of American Art. The contextual meanings revealed when examining texts through semiotics and deconstructionist philosophical inquiry became her primary focus.

From the first, with her Truisms project of 1977/78, Holzer has brought attention to the plight of the oppressed or disenfranchised. Truisms consisted of phrases that at first appear to be advertising slogans. This style displays both a familiarity of form and a subversive undercurrent to the viewer/reader. Do the messages of a consumerist culture offer truth or are they merely manipulations that conflate want with need? Are certain popular notions that seem innocently acceptable actually a subtle way to oppress or subjugate a particular population?

Holzer is not simply didactic and preachy, she devises phrases that may seem like truth, but are actually prone to initiate an analysis of our preconceptions. Consider this selection of Truisms:

Any surplus is immoral.
Morality is for little people.
Everyone’s work is equally important.
Humanism is obsolete.
Men are not monogamous by nature.

Holzer plays both sides of the fence, but to the same end.

Context has also been a significant element of her work throughout every stage of its development. The early Truisms were printed like posters and placed, like posters, in a guerilla art fashion. In fully public, non-artworld sanctioned locations, the Truisms were shocking to stumble upon. They were shocking in the sense that viewers did not expect to be confronted with these topics in the course of everyday life experiences.

The medium for which Holzer became best known in the 1980s and 90s was far more technologically advanced. Having already utilized the assumed truthfulness inherent in bronze wall plaques and the obvious consumerist associations of billboards, she moved to electronic LED reader boards—Spectacolor boards. The medium’s tendency to convey the most current information (i.e. temperature, time, and upcoming events) ensured that viewers would naturally gravitate to the messages displayed.

While Holzer put the boards to use in the typical art settings of museums and galleries, her co-opting of public message boards for her art was more prescient. Messages like "Protect me from what I want," running on boards in New York’s Times Square or on the Las Vegas Strip, jarred viewers into considering their various unanalyzed motivations.

The artist has always been aware of how the message and the medium need to align. She is not enamored with technology for its own sake. When one considers he exhibition—More Cliches—at the Guggenheim Museum in 1990 this becomes evident. By this time, Holzer’s electronic reader boards could have been considered a cliche. They were the medium with which her name had become synonymous. Of course, cliche had to do with the text based works in general, too. She meant to challenge some long established cliches.

More Cliches incorporated LED boards by spiraling them around the interior wall of the signature Frank Loyd Wright structure. Three hundred thirty messages chased after one another in a brilliant blur of colored light. These phrases were countered with a ring of marble benches on the floor below. Truism-style Holzer phrases had been carved into the top surfaces of these seemingly eternal, immovable benches. The play of the permanent against the ephemeral presented a challenge to viewers. Does the way messages are marketed to us, the medium employed, influence our belief in the reliability of those same messages? Are we subtly manipulated without recognizing it? Do long term assumptions have to remain "set in stone?"

Holzer’s method of composing thought provoking messages to be introduced into the public realm, by whatever means, essentially went along in a logical progression for a couple decades. Certainly, the media changed many times. Messages printed on condom wrappers were produced concurrently with xenon light projections. The latter allowed text to be directly projected onto the exterior walls of buildings, bypassing the earlier need for Spectacolor boards.

Something happened in the mid-1990s that changed Holzer’s art. It had always had a political bent, but this was enhanced after she read accounts of atrocities against women during the Bosnian war. The high occurrence of rape/murders (Lustmord, in the German) caused her to produce texts based on such an event, though written from three perspectives: the victim, the rapist/murderer, and the witnessing child of the victim. The intermingling of viewpoints within the work produces disturbing and unsettling juxtapositions.

One of the first "exhibitions" of this work was in the printed format of a German-language magazine. Included were photographs of these varying textual phrases written directly on the skin of several individuals. Cropped so that the text laden persons remain anonymous (even the locations on the bodies are unidentifiable) the quilt of images announces that this is a crime against humanity and that we are all culpable for allowing it to continue. However, the greatest controversy at the time was the ink used to print text on a card attached to the cover of the magazine. It was an ink that contained a small percentage of human blood. Accusations of health risks along with allegations of a waste of human blood were part of the firestorm.

Holzer weathered the initial controversy and has continued to exhibit the work. Most recently Lustmord was part of the exhibit PROTECT PROTECT at the Whitney Museum. Aside from the text on skin imagery there were LED display boards and bones with attached metal bands imprinted with text. While this recycling of earlier work is typical of Holzer’s shifting style, it should not be assumed that completely original work has failed to come to light over the last decade.

War, again, was the impetus for Holzer’s most recent body of work. It could be argued that this is some of Holzer’s best work in decades (I first viewed in at an opening reception with the artist at the Barbara Krakow Gallery in Boston). It finds her returning to an earlier medium—printmaking—and focusing on the omitted word over the readable word. The subject of the works is declassified documents detailing reports concerning prisoner detainees in the War on Terror.

Holzer has made photo-silkscreen enlargements of the declassified documents which she, as a U.S. citizen, easily obtained from the Library of Congress. Essentially, these are instances of prisoner abuse, on the part of the American military, which the artist perceives are indicative of the policies of the Bush administration. What one can read in the documents is gruesome at times, and unjustified at most any time. Much of each document has been blackened out, rendering words unreadable. It would seem that these omissions, though often meant to protect identities, are hiding even more heinous information.

Throughout every phase of Holzer’s work the words she provides (or doesn’t provide) us are a call to question all the information we receive. Unquestioned ideas can easily become the accepted beliefs of a culture—whether they are true or not. An understanding of Jenny Holzer’s text based work provides a useful foundation in concepts of Critical Theory that, in turn, opens up much of the art work created over the last three or four decades.
Posted by Musings on Contemporary Art & Artists at 2:57 PM