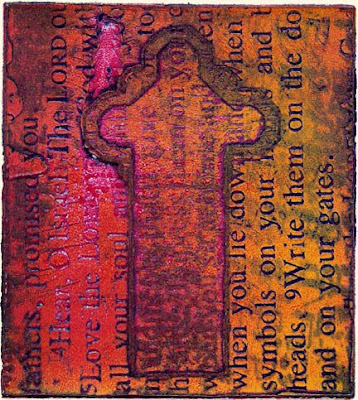 Only one edition of this new series has actually been printed—Fix these words in your hearts and minds. There are five smaller plates (including Write them on the doorframes of your houses, above) that have been proofed but not yet printed as editions. In fact, I still need to do some color tests before I choose the final color combinations for a few plates. Individual prints from the editions will be available, but the idea also evolved into the concept of a limited edition artist’s book that will be a gift to some friends and family. Each book will include prints of the five smaller plates along with text that explains the idea behind the project.
Posted by Musings on Contemporary Art & Artists at 6:39 PM

Tyrus, the print is beautiful online, and I bet even better live.