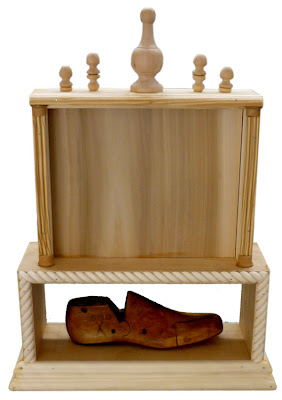 Even though I completed two altarpiece constructions within the past year, it has actually been about eight years since I actually built the structure of one. I had done plenty of work associated with the altarpieces, but I had not been building them. I prefer to use reclaimed lumber from old furniture when I can find it. When I was months away from moving to Massachusetts from Idaho I made a big push to build the structures for five or six of these works from my stockpile of wood, acknowledging that it was better to move half finished artworks across the country than a pile of wood. It then took several years to complete the figure paintings inside the “shells.”
In the intervening years I have worked on the plans for many more altarpiece works. I recently began building the structures for two of these. One is for a benefit for a museum in New York and the other is an older idea that incorporates more assemblage elements, giving a taste of the direction of future works. 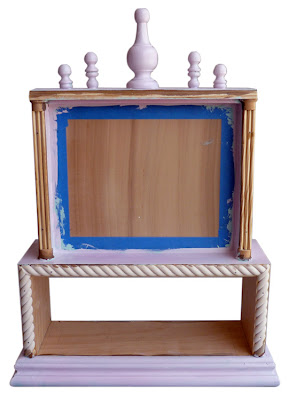 I have stated before that I age these works much in the way that Joseph Cornell aged his own box constructions. I have included some photographs of these pieces in progress to show just how much effort goes into this aging process—well before the figurative elements are painted.
One image shows the unpainted state of a smaller construction. The wood is pine, with some additional elements of either aspen of poplar. The surface of the bare wood is usually scrubbed with a wire brush at this point, to bring up the grain. Most of the exposed wood on these pieces was next coated with a solution of vinegar that had a pad of steel wool soaking in it. This rusty solution oxidizes the wood, giving it a weathered, gray appearance.
The exterior sides of the boxes were then coated with a light green colored oil-based enamel paint. After that dried another coat of pink enamel was added. These colors were derived from the countless layers of paint that cover the walls of old American Protestant churches across the continent (although Catholic churches may exhibit the same thing). Growing up, I was often enlisted to help paint rooms in our church whenever some wall color went out of fashion or the use of a particular room changed. I recall many variations of pinks and light greens and yellows. So these colors show up in the altarpieces as a connection to this country’s religious history. 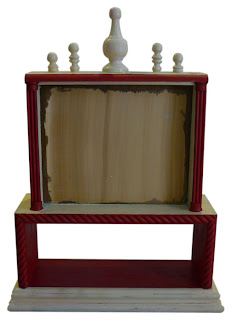 The next step entailed taking a heat gun (used to remove old paint), putty knife, and wire brush to the sides. This actually mixes the two colors a bit, but it also brings up the underlying layers of green paint and gray wood. Another layer of off-white (almond colored) oil enamel was then applied. This was given the same heat gun and scraping treatment. The interior boxes were treated in a similar manner using light yellow and off-white layers of paint.
Trim elements on the boxes are handled in a different way. The bare wood (without coats of the vinegar solution) is covered with a deep red acrylic paint. An adhesive is then carefully applied over the red. This adhesive goes on in a very liquid form—milky white—and dries clear. 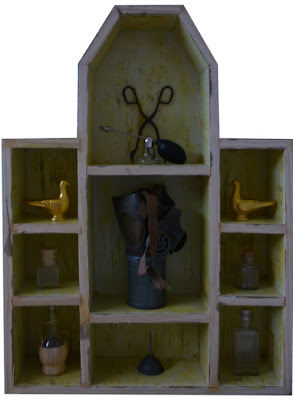 The gold leaf—which is really made of brass—is then slowly applied. Large flat areas are easy to cover, but the intricate details and crevices in the decorative mouldings must be filled by pressing bits of the leafing in with a hard bristle brush. A chemical is then brushed over the metal leaf. This turns the copper elements in the brass to green. This may take multiple applications and some areas are still kept as unaltered gold. The final layer of this portion of the boxes is given a polyurethane clear coat that prevents the brass from changing any further.
When all this process is added to the time it takes to construct the boxes themselves, it is no surprise that I say that the painting of the images takes the least amount of time. I am very pleased with the effects in these recent works and will continue to post further updates of their progress. 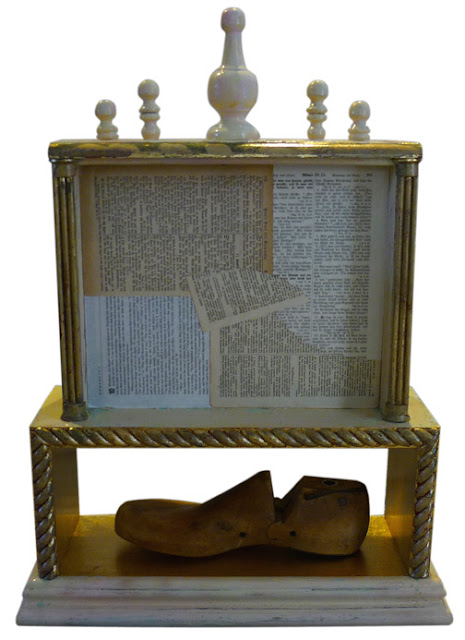 Posted by Musings on Contemporary Art & Artists at 5:09 PM