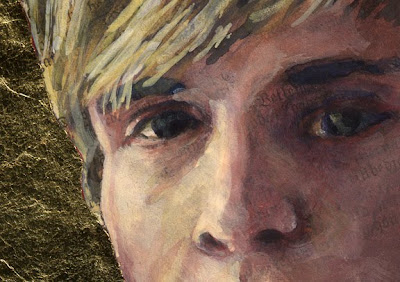 Whether they use them or not, most people are at least familiar with the three primary painting mediums: oil, acrylic, and watercolor. They may not be able to decipher the differences among them, and they probably do not know about the technical distinctions that apply to each painting process, but they know that these are the types of paints artists use. In actuality, these are just the three most well known forms of paint. Acrylic is actually quite recent. Before oil paint was used artists preferred encaustic (wax-based), tempera (egg yolk-based), and even fresco (painting on or in plaster). There are certainly other types of paint, too. 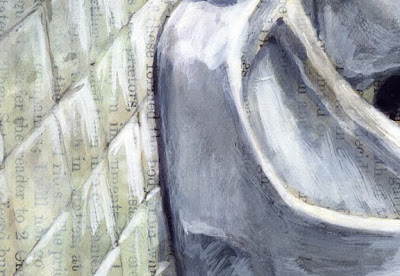 There are reasons why an artist chooses a particular painting medium. Sometimes this initially happens by accident. Perhaps this was the medium a teacher in high school or college preferred. It may be the medium he or she learned while taking a community art class. Eventually, an artist most likely uses a specific painting medium because it possesses certain qualities that are intrinsic to his or her painting process. 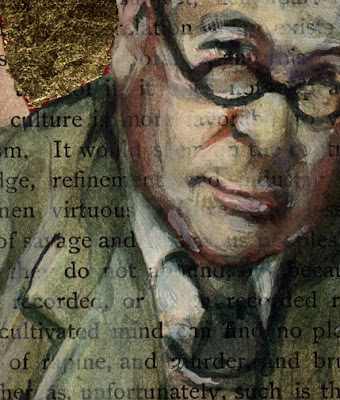 For me, the use of casein paint was a combination of things. I saw this water soluble paint, mixed with transparent watercolor, used in a demonstration during my freshman year of college. Some watercolor artists are purists and refuse to mix any opaque paints with their transparent ones. I liked the effect produced by this artist’s demonstration, so I purchased a tube of white casein and experimented.

I tended to stick with oil paint during most of my time as an undergraduate. However, I chose to use watercolor and casein for a pivotal work during my senior year. Taking Salvador Dali’s Corpus Hypercubus as a point of departure, I devised a crucifixion that portrayed a Christ not floating before cubes, but, himself, segmented into squares that floated off the gallery wall. This was really unlike anything else I was creating at the time. In many ways it was the impetus for the work I created during graduate school, and much of the work I have completed in the last decade. 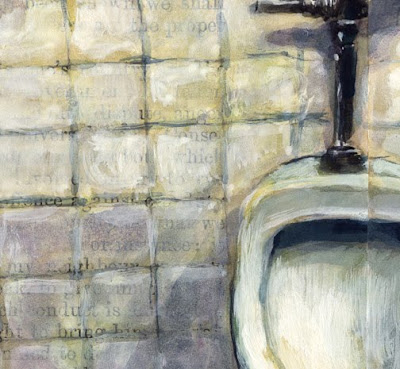 What I discovered as I worked on that early piece was that there was a unique, visceral quality to the combined watercolor and white casein. I could achieve that subtle variation of bluish veins just beneath the surface of the skin in oil paint, but had not found a suitable equivalent with watercolor. The process allowed me to create "fleshier" works, but I was still only using it on occasion.

It was not until the end of the 1990s, when I began to paint on book pages, that the mix of watercolor and casein became a more common medium for me. My work with oil on book pages had revealed that a combination of transparency and opacity were essential when creating a substantial figure that still allowed the text to show through. The layering of transparent and more opaque colors was similar to my work in oil paint. 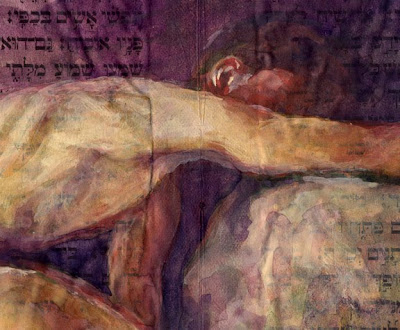 The main difference between the oil and watercolor work is that I am able to paint directly on the book pages when using watercolor. Works in oil sit on the surface of the paper. Pages must be coated with a clear acrylic medium so that the oil does not create a halo around the image and eventually deteriorate the fragile pages. In a way, when the watercolor stains the book pages the image and the page become one. The words and images are combined into a single unit so that they are closer to the incarnational concept that remains such an integral part of most of my work.
Posted by Musings on Contemporary Art & Artists at 10:59 AM 2 comments: Links to this post 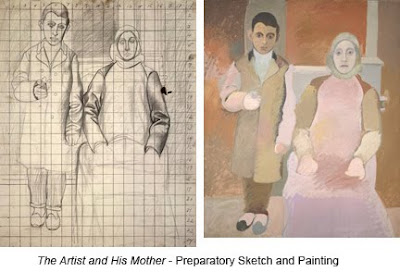 There used to be a bias in the art historical analyses of some Modernists. It was a persistent leftover from earlier periods that suggested the evolution of visual art was moving in a straight line, with a somewhat logical progression. Coincidentally, the pinnacle of achievement in this theory was pure abstraction—the very work those Modernists favored. What a convenient confluence.

Luckily, the lenses of critical theory and Postmodernism’s pluralism have shown that history looks very little like a linear route. The interconnections that can be traced across time tend to unravel more like a knitted sweater, heaped in a jumble of looping strands. And yet, there remain some figures in the story of art who are clearly synthesizers—transitional figures who act as a bridge between periods.

Arshile Gorky, though far from a household name, was one of those key transitional figures. He was also quite a tragic one. It may be the adversity that both brought the best out of Gorky and eventually led to his downfall. 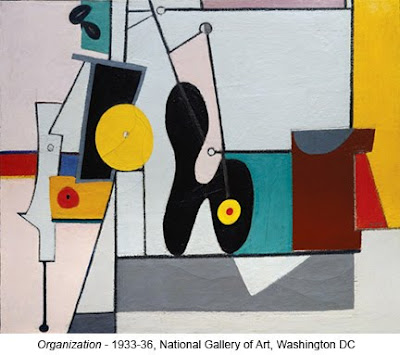 In some ways, Gorky was far from significant or original in his early paintings. One finds the mimetic paintings of his early career to be the same fare as his amateurish contemporaries. Gorky made his way through the pantheon of prominent artists and painting styles of the previous fifty years. His works appear as re-presentations of Cezanne and Picasso. Those familiar shapes and color schemes are simply his method of learning the visual language of Modern form and composition.

Though an Armenian immigrant, Gorky was determined to reinvent himself as a previously accomplished Modernist upon his arrival to the U.S. His state-side name change was meant to strengthen the credibility of his claims. His early geometric abstractions were reminiscent of Russian Modernists like Malevich and Kandinsky. The latter he had even claimed to study under. Yet Gorky was not content to import the styles of the Europeans alone.

The American answer to Picasso’s Cubist forays was found in the jazz-like compositions of Stuart Davis. Davis had landed somewhere between Picasso and the late works of Matisse. Gorky picked up on the hybrid of styles in Davis’ work while he was completing a mural project for the WPA. It was one of many brief stops on his way to the creation of a truly innovative and original style.

Gorky was not the sole European of Mediterranean immigrant artist of his age. The wars in the first half of the twentieth century displaced scores of artists. A large portion of them ended up in New York City and it was in that rich cultural stew that Arshile Gorky simmered. The influence of the Surrealists became the primary element that pushed Gorky into original motifs. It was during this period that he finally began to swap roles—some other artists began to emulate Gorky’s work.

While there were still similarities to the works of Miro, Masson, and Matta, Gorky was beginning to craft his something unique. Paintings like Enigmatic Combat and They Will Take My Island even prefigure the earlier abstractions of Jackson Pollock. Gorky was fully intrigued with Surrealism. He association with the artists of the Julien Levy Gallery allowed him to analyze and experience the major tenets of that movement. But Gorky could never completely adhere to Surrealism’s devices. He liked the idea of automatism, but it was too detached for his tastes. Though his late work appeared to be non-objective, Gorky always favored a classicism that actually led to concepts of mythologizing. This linked his work to the past as much as to his own time. It was his melding together of multiple elements that eventually brought forth a visual language completely his own. 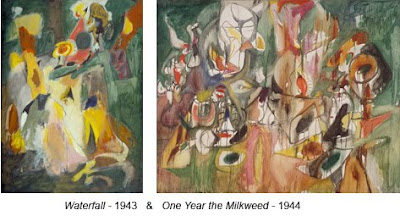 The fluidity if Gorky’s paint, as demonstrated in works like Waterfall and One Year the Milkweed, was clearly an influence on the stain technique of Frankenthaler—and Morris Louis and Kenneth Noland, in turn. But this is only one aspect of Gorky’s mature work. The haziness of forms paved the way for Mark Rothko. The haphazard, yet controlled, brush qualities were the model for every stage of de Kooning’s painting. 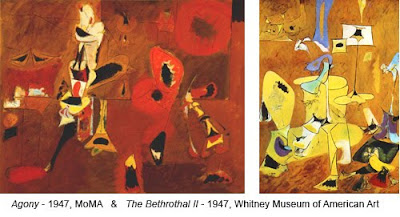 Unfortunately, Gorky modeled not only a painting style, but a lifestyle for some of these same artists. He peaked at a fairly young age and then his life spun out of control. After his father’s death in 1947, Gorky learned that his wife was having and affair with a Surrealist painter (Matta). He first began talking about suicide in that year. In June 1948 Gorky suffered severe injuries from an automobile accident with gallerist Julien Levy. Within weeks he had hanged himself.
These tales bring to mind the stories of both Rothko and Pollock. Perhaps for all of them, the newfound art world fame was more than they could take. Gorky’s work had a dark cast in his later years—consider Agony of 1947—that would once again appear in Rothko’s late paintings. Both artists ultimately ended their own lives. Tales of Pollock’s out of control behavior that led to his fatal car crash are similar. With each artist the existentialist search for meaning in the work itself seemed to come up empty. So, sadly, they all came to profound visual discoveries that balanced themes of mythology and spirituality, yet failed to satisfy their longings. It makes the work bittersweet and reminds us that art may lead us to the profound ideas of life, but it does not provide a sufficient substitute for real meaning.
"Arshile Gorky: A Retrospective

" runs through January 10, 2010 at the Philadelphia Museum of Art. It then travels to the Tate Modern (London) and the MOCA (Los Angeles)
Posted by Musings on Contemporary Art & Artists at 3:44 PM No comments: Links to this post