Santos: An Unlikely Case for Veneration 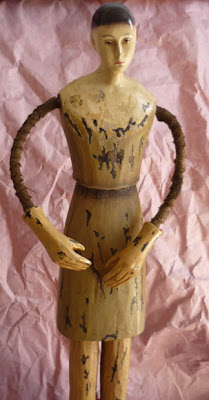 My formative years were spent in the bosom of the conservative Protestant Midwest. It is a land and culture essentially devoid of any mixing of art and religion. Save for the occasional and obligatory portrait of Christ by Warner Sallman (and the one at my church had an incandescent glow from a light bulb located behind the frame), the only matrimony these two shared was in the kitschy figures that populated the Sunday School flannelgraph board. I expect there was an underlying fear we might be breaking the second commandment’s prohibition on idolatry. At the very least, we didn’t want to be accused of being papists.

A lot of artistic and religious water has passed under the bridge in the intervening decades. I have arrived at the other side with some rather divergent conclusions. It would certainly prove difficult to work as an artist if I held the view that the creation of any and all images is an affront to God. And while some still hold that view or struggle with it—for them I recommend the novels of Chaim Potok: My Name is Asher Lev and The Gift of Ashe Lev—a clear understanding that God wishes for us to place nothing in this world above him allows much freedom in the creation of images. Graven or otherwise.

But back to the derided Catholics, and the Orthodox for that matter. There is no doubt an allure to these traditions for those who have existed in a visual vacuum. A large percentage of the art produced in the Western world for the last thousand years was made in service of these traditions. But with the birth of the Protestant Reformation, countless statues of various saints were obliterated. The clear message was that Christians were not to be in the business of this image making. And for almost five hundred years that was the sole message that some Protestants received, as misguided and unbased in actual scripture and history as it was.

The tradition of creating these statues of saints to supplement religious contemplation and devotion did not end with the Reformation. On the contrary, Rome redoubled its efforts with the Counter-Reformation. The far ranging effects of this initiative shifted the Catholic faith into and throughout the New World. Without a common language in these new territories, it was the artwork that revealed the story of Christ to the indigenous peoples. In Christ and the saints they found the archetypes and personalities already represented in their own religious systems.

This transplantation of the Christian saints to new cultures is where my interest in the santos figure began. In the American Southwest these figures abound. Natives of the region now known as New Mexico were naturally drawn to a religious experience that incorporated ritual. The veneration of saints, aided by statues depicting them, provided a palatable transition.

Here I must delineate the difference between veneration and worship. This is, indeed, at the root of the iconoclasm that sprouted in the Reformation. For Christians, worship is given unto God alone. In some traditions, veneration is permitted when it comes to canonized saints, through their icons and relics. To the casual observer, it might appear that the person venerating an icon of a saint is in fact worshipping a painting—and there can be a fine line—but something else is really taking place. He or she is actually honoring those Christ-like qualities present in the life of that saint, worthy of our consideration and contemplation.

The santos figures themselves are based on prototypes of saint sculptures created in Catholic Europe. With the dynamic expansion of the Catholic faith in the New World the demand for religious art surpassed the supply. The Church eventually relented and allowed craftsmen in these "new" territories to create religious art for use in their new missions and churches. These New World santos often have a bit of a folk art sensibility that comes from an overflow of the traditional art of the original cultures.

The image above is a type of mass produced and generic santo. I found it at TJ Maxx in the home decor section. I felt that, with a little alteration, this could easily be incorporated into one of my altarpieces. I am still figuring out who this little figure will represent and what the scheme of the rest of the altarpiece will be. It is a logical progression, however, to add such a figure. The concept of veneration was an essential element of the first series of altarpieces.
Posted by Musings on Contemporary Art & Artists at 6:58 PM